The United States, Russia and the 'No Cost' Paradigm 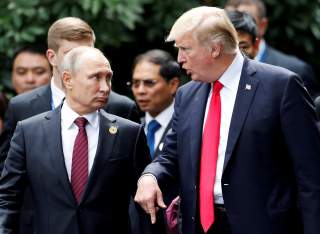 Dan Drezner, who has a blog at the Washington Post, is correct to caution the foreign policy commentariat from not overblowing comparisons between the Cuban Missile Crisis of 1962 and current Russian-American tensions over Syria today, noting that the “conflict in Syria lacks the tight coupling between initial clash and escalation to full-blown nuclear war that the Cuban missile crisis did.” Nevertheless, like former U.S. ambassador to Russia Michael McFaul or former head of MI6 John Sawers, I agree that we are facing a realistic prospect for a clash between Moscow and Washington.

It worries me to see politicians and officials in Washington be so blasé about the risks of conflict with a country that, while not a superpower, still possesses nuclear weapons and a formidable array of conventional and non-conventional capabilities—and has demonstrated the ability to project them abroad and to use them. It is also striking how disconnected the American public appears to be from the entire discussion about the risks of escalating matters with the Kremlin, as if this is something that only inside-the-Beltway types worry about with no real ramifications for the rest of the country. In this regard, Drezner is right to contrast Syria with Cuba in 1962, because back then U.S. citizens across the country were very cognizant of the stakes and understood how the Cuba crisis affected them.

As it so happens, the limited allied missile strike on several targets in Syria alleged to be associated with Bashar al-Assad’s efforts to reconstitute his chemical weapons capabilities occurred during the inaugural sessions of the Sustained Dialogue Institute’s “Bridging the Gap” dialogue designed to identify what could be the foundations of a sustainable, bipartisan U.S. approach towards Russia. In those initial conversations, several issues became apparent—which the unfolding Syria story helped to confirm.

The first is that the United States cannot hope to have an effective approach towards managing relations with the Kremlin until it figures out what it wants from Russia. Avoiding stumbling into a conflict that might escalate into a nuclear exchange is a clear and predominant interest, but operationalizing it in terms of specific policies proves to be much more difficult. Beyond that, the United States swings back and forth between the assertion that Russian help is indispensable in tackling most of the world's pressing problems, the complaint that Russian meddling exacerbates many of the irritating situations around the globe, or that Russia is largely irrelevant to the march of international affairs. The problem is that whipsawing between these three perspectives leads to policy incoherence, because proponents of the first argument are likely to look for ways to promote U.S.-Russia cooperation, while adherents to the second are more inclined to take a confrontational approach to raise costs for Russian action around the world, while the final group tends to dismiss any need to accommodate Russian concerns while downplaying the threat Russia poses to U.S. interests.

Linked to this first dilemma is the question of costs and benefits. Is Russian help worth the price the Kremlin would request—particularly in terms of the United States reducing its demands on Russia to have its internal domestic politics align more along lines the United States prefers, recognizing some degree of a Russian sphere of influence in the Eurasian space and giving Moscow more ability to impact how the United States wields its power around the world? On the other hand, when Russia takes actions that directly challenge U.S. interests and preferences, beyond registering loud and vocal complaints, what price are Americans willing to pay to compel the Kremlin to pay a cost? For the last several years, we have seen a quiet but real internal debate in America over applying sanctions to Russia—trying to find the tools that will increase costs and create pain for Russia but minimizing blowback that would also damage U.S. interests. We still don't have a clear cost calculus for what the United States is willing to commit to deter Russian action or compel Moscow to change its course.

This ties into the last issue: it is hard to calculate costs when there is no overarching narrative about how Russia—either as a potential partner or as an adversarial competitor—fits into U.S. policy. The USSR during the Cold War posed an existential challenge to the United States and to its institutions and way of life that could serve as a powerful mobilizing tool and that could create a strong, viable bipartisan consensus that could endure for decades. Russia today is a challenge but, absent a crisis that leads to a nuclear war, not seeking the destruction of the United States (even if it is interested in reducing the U.S. role within the global system). There are plenty of single-issue constituencies that have objections to the current Russian regime—human rights activists, people concerned about the fate of the Baltic States, Georgia and Ukraine, etc.—but no compelling story that explains how or why Russia requires a major national mobilization. Americans dislike images of children killed by chemical weapons in Syria, but also did not appear to want to step on to the ladder of escalation to more forcefully confront Russia. On the other hand, Americans are not opposed, in principle, to better relations with Russia, but don't see how or why cooperation with Moscow impacts them or should require any major compromises or concessions on America's part.

And this highlights an important conclusion. Washington think tanks can churn out studies about the need to confront Russia or cooperate with it, but the rationale behind either confrontation or accommodation does not have deep, strong roots sunk into the American body public. Therefore, U.S. policymakers in Washington are limited by the "no cost" paradigm: that foreign policy actions will be tolerated by the mass of voters as long as they aren't asked to assume major liabilities. The worry that the Syria events might start World War III was a reality check—but as the crisis has subsided, the unanswered questions about the goals and purposes of U.S. policy towards Russia remain.