The United States Should Look East with India 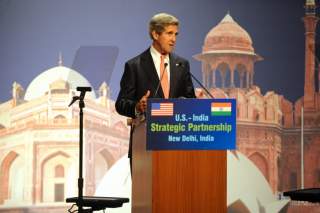 According to the insightful, Nobel Prize winning Amartya Sen, India is prone to being mischaracterized. Accordingly, the United States must see the bigger picture and look beyond India’s fickleness and vacillation in order to recognize that there is a bidirectional relationship that needs to be maintained.

This lesson is important to recall during Prime Minister Narendra Modi’s state visit last week. As India’s foreign-policy tentacles reach further east and west, Washington’s expectations for U.S.-Indian relations need to remain steady. While India can be a fulcrum for leveraging U.S. interests in both Central and East Asia, it should also be an anchor partner that practices a different brand of democracy that may align with the United States on many—but not all—things. The United States should support India in its efforts to broaden its neighborhood interests and should not be alarmed when India aligns itself on occasion with China or Russia.

Former Indian prime minister Manmohan Singh believed that India’s Look East policy would represent a strategic shift in India's vision of the world and place in the global economy. And India’s engagement with the Association of Southeast Asian Nations (ASEAN) has been on a swift trajectory since a Free Trade Agreement (FTA) was signed in 2010. Modi’s actions can be seen as an actualization of Singh’s vision of economic liberalization. The Look East policy is rapidly becoming an Act East policy; this escalation signals an engagement that extends beyond Japan to other Southeast Asian countries.

With the solidification of an ASEAN Economic Community (AEC) on the horizon for 2015, India’s reach will extend from the Indian Ocean to the shores of the Pacific Ocean. Overland, beyond the Indian Subcontinent, India will have access to Vietnam and Singapore. Myanmar plays a key role as the route for major connectivity between India's landlocked northeast and southeast. Connectivity corridors like the Trilateral Highway and the Kaladan Multi-modal Project are rapidly transitioning into development corridors.

Prior to making his way to the United States, President Modi visited Japan. While Japan and India are basking in the afterglow of what is being lauded as a resounding success, the nature of this special strategic and global partnership remains subject to interpretation. For the time being, the relationship can be characterized by strategic plans to lessen Japan’s dependency on China for certain assets and materials while enabling India to build its critical infrastructure and economy. Japan sees India as a defense partner as well as an economic treasure trove, and Modi’s intentions seem clear: countering China’s increasing strategic, military, and economic influence and expansionist tendencies is a shared concern.

Following Modi’s visit to Japan, President Xi Jinping of China visited India. The trip has not been hailed as an overwhelming success because expectations for greater investment by China were unmet. China’s model for project finance tends to be accompanied by Chinese workers, which appears to be a sticking point for the human capital and labor-rich market of India. The visit was also marred by a standoff between Chinese and Indian soldiers on the disputed Line of Control (LoC). All of this is in stark contrast to Modi’s U.S. charm offensive, aimed at garnering support from the U.S. commitment to democracy and the considerable Indian American diaspora.

This being said, India’s relationship with China—which represents an entirely different model of governance than India and the United States—is a mixed one, The Shanghai Cooperation Organization (SCO) brings China’s influence to Eurasia. China has been dangling a carrot to India by offering to upgrade their observer status to full membership. Nonetheless, these bi-directional pushes do not exclude China and India’s precarious relationship. As India continues to seek an invitation to join the ranks of the Asia-Pacific Economic Cooperation (APEC) forum of which seven out of the ten ASEAN member states are also members, enlisting Chinese support to extend this invitation necessitates diplomatic finesse.

India’s increased engagement in Japan, Vietnam and Myanmar will antagonize China, but Modi is unlikely to allow his foreign policy to be held hostage. Instead, India will likely work proactive policy to deal with states like Vietnam, Taiwan, Indonesia, Malaysia, the Philippines and Japan—all potential allies in the question to protect economic and strategic interests in South China Sea and Indian Ocean region against Chinese adventurism.

In Central Asia, tacit U.S. expectations are for India’s western sphere of influence in Afghanistan after the coalition withdraws its presence in 2016. With respect to Afghanistan, the SCO—with or without India as a full member—is looking to focus on cracking down on Islamic radicalization, terrorism, and the Jihadi diaspora moving across the Middle East and Central Asia. While India is no stranger to radical, terrorist, or extremist action on its own soil, the latest announcement that an Al Qaeda affiliate in the Indian Subcontinent means that New Delhi will also be sharing Washington’s threat burden.

Moreover, as Western nations withdraw from Afghanistan, India cannot vacate its own neighborhood. And should Pakistan-led anti-Indian forces shape shift into an Al Qaeda subsidiary, coalesce with domestic Indian extremists or fight a turf war with the Islamic State (IS), it is likely that U.S. cooperation will be solicited. Avoiding a “taste test” challenge between Al Qaeda and IS by domestic Indian extremists will be a key. Moreover, as the United States has had a favorable relationship with Bangladesh, India’s other subcontinental neighbor, there are concerns that radical Islamist extremists will gain a foothold near India’s other borders.

In 2010 the United States and India began a homeland security partnership that highlighted the special relationship between the two countries. It is not surprising in 2014, that the United States has now surpassed Russia as India’s greatest defense supplier, it is likely that increased military and civilian law enforcement cooperation will follow.

The U.S.-Indian strategic partnership certainly extends far beyond the botched 2005 unconventional nuclear deal. Cooperation in energy and the environment, high-technology including space, counterterrorism, trade and agriculture should be areas where both sides can work together. While U.S.-Indian relations have suffered some diplomatic tensions, it’s time to look at the big picture and focus on strategic alignment, not petty posturing. Washington needs to prepare itself for an independently yet somewhat like-minded partner in New Delhi.

Melissa S. Hersh is a Washington, D.C.-based risk analyst and Truman National Security Fellow. Ajey Lele is a Research Fellow at the Institute for Defence Studies and Analysis, New Delhi. The views expressed are their own.