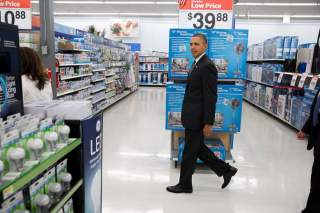 On August 23, the president took time out from his vacation to speak to the American people. Oddly, he didn’t talk about ISIS, Ukraine, the Islamist takeover of Tripoli or even border security here at home.

No, what lured the president from the links of Martha’s Vineyard to a radio microphone was the opportunity to publicly urge American businesses to lobby Congress to keep funding the U.S. Export-Import Bank.

In fact, one of the president’s most disingenuous claims was that the bank is all about small business. According to Mercatus Center economist Veronique de Rugy, the bank provides export financing for just 0.04 percent of America’s small businesses.

Main Street business owners could care less about the Ex-Im Bank. The people who do care about it are the kind of folks who hang out with the president at Martha’s Vineyard. Mr. Obama’s statement had everything to do with making them happy—and nothing to do with asking Congress to do something for everyday Americans.

Congress-chartered the Export-Import Bank in 1934 as a government credit agency. Basically, it provides loans and loan guarantees to foreign companies interested in buying U.S.-made products. There may have been an argument for such services at the height of the Depression, when banks were down and out and money was scarce. But eighty years later, it’s far from clear why American taxpayers need to finance a government-owned enterprise to do the work that the private sector could handle quite easily. After all, 98 percent of U.S. exports get along fine without the bank. It makes no sense to saddle taxpayers with $140 billion in exposure to promote a thin slice of America’s foreign sales.

More than three-quarters of the bank’s total lending goes to just a handful of big companies, and all of them are well established in the international markets. These favored few have ready access to capital through normal channels. It’s hard to justify putting taxpayer dollars at risk for them—especially in light of the many problems that have surfaced at the bank. For example, the House Committee on Government Oversight and Reform recently had a hearing exploring allegations of fraud and corruption related to the bank. The Inspector General concluded that the bank lacks sufficient policies to prevent waste, fraud and abuse.

Further, the bank is no free lunch. Channeling billions of taxpayer dollars overseas to facilitate purchases from some American companies puts other American firms at a competitive disadvantage. Ex-Im financing of coal mining in Colombia or copper excavation in Mexico, for example, contributes to job losses among domestic producers.

The bank is a small example of a much bigger problem. There is too much government in our economy, and that undermines efforts to promote economic freedom at home and abroad.

According to the “Index of Economic Freedom,” co-published by The Heritage Foundation and The Wall Street Journal, economic freedom in the United States has declined for seven consecutive years—to the point that we have dropped out of the list of the world’s ten freest economies.

Yes, other governments may cook the books to prop up some of their exports. But that’s no excuse for the United States to do the same. Instead of copying bad economic policies from socialist countries, the United States should embrace policies that promote economic freedom for all.

James Jay Carafano is a vice president of The Heritage Foundation, where he directs their defense and foreign policy studies. You can follow him on Twitter: @JJCarafano.