Is the U.S. Air Force Set for a "Crash Landing"? 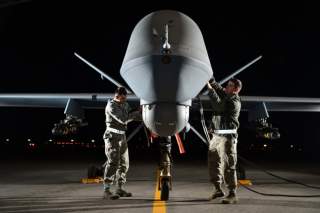 The problem is that the Air Force seems to be going in the opposite direction of its Commander-in-Chief.

President Obama has signaled a muscular response to the threat of the Islamic State of Iraq and Syria (ISIS), vowing to “destroy” ISIS and undertaking steps to build a coalition to do so. Airpower has already proven vital in halting ISIS’s advance in northern Iraq and assisting Iraqi forces in retaking key areas. A model of local forces on the ground buttressed by American airpower seems to be emerging, and if done correctly, can prove decisive in defeating ISIS. But the airpower needed is not the kind the Air Force is envisioning for its future.

Countering terrorist groups like Al Qaeda and ISIS requires more than simply dropping bombs. The key enabler is intelligence, much of which comes from unmanned aircraft, or “drones.” Contrary to the popular attention paid to “drone strikes,” the most valuable service that drones provide isn’t the ability to drop bombs—many manned aircraft can do that—but rather the ability to loiter overhead for 16-20 hours at a time, watching terrorists and gathering information. Several drones working together can provide 24/7 coverage, an unblinking eye watching a terrorist’s every move, and most importantly, every person he meets with, allowing intelligence analysts to unravel a network and find key leaders.

The Air Force refers to these 24/7 coverage areas as “orbits,” and in its most recent budget, it slashed them. In its Fiscal Year 2015 budget submission, the Department of Defense reduced the number of 24/7 Air Force Predator and Reaper orbits by 15 percent, from 65 to 55. This would make sense if there was too much capacity in the force or if the reduction of troops from Afghanistan meant that fewer surveillance orbits were needed. The reality is that demand for unmanned aircraft for high-priority missions like counterterrorism far exceeds supply. And it isn’t getting any easier. A recent RAND Corporation study found that from 2010 to 2013, the number of jihadist groups increased by 50 percent and the number of fighters more than doubled. The problem isn’t confined to Syria and Iraq. The United States just killed an Al Qaeda leader in a drone strike in Somalia earlier this month.

The U.S. military doesn’t have enough drones to maintain coverage over all of the threat areas, but rather than increase capacity, the Air Force is cutting it. This is a choice that the Air Force acknowledges quite plainly in their strategy document:

“While success in [contested air environments] cannot be at the expense of all lower-end capabilities, our unique and indispensable contribution requires that we posture for the most demanding scenario, not necessarily the most likely.”

If you’re not familiar with DoD code words like “contested,” “lower-end,” and “demanding,” this might seem like standard government pablum. It’s not. With these words, the Air Force is signaling a strategic choice, consistent with their budget, to sacrifice “lower-end” capabilities like Predators and Reapers for stealthy aircraft able to operate in contested air environments against sophisticated air-defense threats. The problem is that this logic equates the “most demanding” scenario in a purely military context with “most dangerous” to the nation. Groups like ISIS and Al Qaeda may not be impressive in a purely military sense—and certainly not in terms of their threat to airpower—but they are a strategic threat to U.S. citizens. The president has stated, in fact, that they are the top national-security threat. The Air Force, however, sees things differently.

The implicit assumption is that “higher-end” capabilities will be able to play down the spectrum of conflict against less capable actors. The problem is that time and again, the U.S. military has seen that logic doesn’t work very well in practice. U.S. ground forces optimized to fight conventional militaries floundered in the early years of the Iraq and Afghanistan campaigns until they relearned counterinsurgency tactics that had been abandoned since Vietnam. Stealthy aircraft can be used to provide surveillance in uncontested environments, but the question is one of capacity. They are extremely expensive relative to nonstealthy drones like Predators and Reapers, and so investing solely in higher-end capabilities will result in insufficient numbers to cover terrorist networks like ISIS and Al Qaeda. The Air Force strategy document actually acknowledges this problem:

“In the early years of our Air Force, a high-end focus left a force structure that was less effective and efficient in conducting combat operations at the lower end of the spectrum of conflict.”

The reality is that the Air Force may not have enough of either, and the real budget trades should not be between high-end or low-end surveillance aircraft, but between surveillance and strike aircraft. Aside from the A-10, cuts to fighter aircraft have been modest, however, even though fourth-generation aircraft like F-15s and F-16s will have limited utility against high-end threats. In a world where DoD is cutting attack submarines by 7 percent, Army end-strength by 20 percent, and debating cutting an aircraft carrier, preserving fourth-generation fighter aircraft while cutting capabilities to track and kill dangerous terrorists makes little strategic sense.

A more fundamental problem is that the Air Force has yet to fully adapt to a world where the balance between surveillance and strike has shifted. The advent of precision-guided munitions means that instead of multiple strike sorties being needed to take out a single target, the Air Force now talks about the number of targets taken out per sortie. The strike capability of a single aircraft has increased dramatically, and if a target can be found, it can be destroyed. As a result of this shift in warfare, both state and nonstate actors have responded by becoming increasingly hard to find. Whether against ISIS, North Korean mobile missile launchers, or mobile air-defense systems, surveillance is likely to be the limiting factor in taking out the enemy. Adjusting the balance of investments accordingly toward greater surveillance makes sense. If the Air Force needs more missile and bomb-carrying capacity—and there are good reasons to think it does—then retaining fourth-generation force structure is not the answer. Instead, the Air Force should look to lower-cost unmanned “loyal wingman” aircraft to give fifth-generation fighters additional magazine depth.

Ultimately, the Air Force is cutting lower-end capabilities needed against dangerous threats like Al Qaeda and ISIS because the Air Force doesn’t see going after those threats as its main job. The Air Force’s primary purpose, in its leaders’ eyes, is to achieve and maintain air dominance, and if investing in the capabilities to do so leaves the United States vulnerable against Islamic extremists, then so be it. This focus on the “most demanding” military threats vice those that are actually the most dangerous to the nation is not strategic and is harmful to national security. Change is unlikely to come from within the Air Force, however. The move to divest of low-end capabilities like Predators and Reapers is not the unfortunate result of budget pressures. It is a deliberate choice by Air Force leaders, consistent with their articulated strategy. If the Air Force budget is to be aligned with the Commander-in-Chief’s strategy and the nation’s priorities, then leadership from the secretary of defense, the president, and Congress is needed.

Paul Scharre is a fellow and Director of the 20YY Warfare Initiative at the Center for a New American Security. From 2008-2013 he worked in the Office of the Secretary of Defense on unmanned systems and intelligence, surveillance, and reconnaissance capabilities. He is a former infantryman in the Army’s 75th Ranger Regiment and has served multiple tours in Iraq and Afghanistan.