The U.S. Air Force's 5 Most Lethal Weapons of War 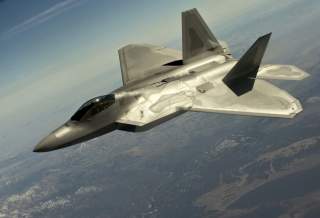 The U.S. Air Force is by far the most capable air arm on the planet. In addition to proper training and rigorous doctrine, the Air Force needs modern weapons to keep ahead of potential competitors. Over the past decade, America’s lead in the air has started to erode as Russia has slowly been recovering from the collapse of the Soviet Union and China has begun to remerge as a superpower. Nonetheless, these following five systems are the backbone of the U.S. Air Force and should continue to hold the advantage for some time to come if ever the unthinkable occurred:

Though strategic nuclear deterrence has become less prominent since the end of the Cold War, the mission remains the single most important one for the Air Force. The backbone of America’s nuclear deterrence remains the 1960s-vintage LGM-30G Minuteman III. Some 450 of these missiles form the land-based component of the so-called nuclear triad.

Over the years, the long-serving missile has been modified and upgraded with better guidance systems and new rocket motors. Though originally designed to be fitted with three multiple independent reentry vehicles each carrying a nuclear warhead, the current version of the missile carries only one 300-kiloton weapon. The United States plans to continue to upgrade that missile, but eventually will have to develop a new ICBM to replace the Minuteman. It’s not a question of if, it’s a question of when.

The Air Force’s tiny fleet of twenty Northrop Grumman B-2 Spirit stealth bombers is the only long-range penetrating strike asset in the service’s arsenal. No other aircraft in the Air Force inventory has the range to take off from the continental United States and strike at targets on the other side of the globe inside highly contested airspace. The B-2 has an unrefueled range of around 6000 nautical miles, but that can be extended to around 10,000 with aerial refueling.

Nor does any other warplane in the Air Force inventory have the ability to penetrate the kinds of dense air defenses against which the B-2 was designed to operate. The B-2 was designed to fly deep into the heart of the Soviet Union to deliver a payload of thermonuclear bombs in the event of a third world war. While the B-2 has never had occasion to fly that doomsday mission, those same capabilities allow the bomber to strike with near impunity against almost any target around the globe. Further, while fighters like the F-22 or F-35 are very stealthy against high-frequency fire control radars, a large flying-wing aircraft like the B-2 is also difficult to track using low frequency radars operating in the UHF and VHF bands.

The problem for the Air Force is that there were only twenty-one B-2s ordered before the first Bush administration terminated the program. Of those twenty-one jets, one has already been lost. Not only is the fleet tiny and in high demand, the bomber has sensitive coatings and is ridiculously expensive to maintain. To make matters worse, potential adversaries like Russia and China are learning to counter the B-2.

The Air Force has a follow-on bomber project called the Long Range Strike-Bomber in the works which is set to become operational in the mid-2020s. The service hopes to acquire between eighty and 100 of the new stealth bombers for a cost of $550 million per jet, which is less than the B-2’s near $2 billion price tag.

High flying and fast, the Lockheed Martin F-22 Raptor stealth fighter is arguably the best air superiority fighter in existence. In many ways, gaining and maintaining air superiority is the core mission for the service. Only with absolute control of the air and space can ground and sea surface elements maneuver unchallenged.

The F-22 is extremely stealthy and is fitted with advanced avionics. Further, it can cruise at supersonic speeds greater than Mach 1.8 at altitudes up to 60,000 ft for extended periods. When operating at lower speeds and altitudes, it has the ability to vector thrust from its engines—which gives it tremendous maneuverability. In short, the Raptor’s combination of sheer speed, altitude, stealth and powerful sensors makes it a lethal killer.

The problem for the Air Force is that there are only 186 Raptors in its inventory—less than half of what it needs. Of those 186, only 120 are “combat coded”—which is Air Force speak for ready for war. There are only six operational Raptor squadrons, one operational training squadron and a handful of test and training assets at Nellis Air Force Base in Nevada and Edwards Air Force Base in California. Those squadrons are also smaller than the typical Air Force fighter units. Raptor squadrons only have twenty-one jets and two attrition reserve planes. By contrast, a typical fighter squadron normally has twenty-four jets and two spares.

The Air Force is starting to investigate follow-ons to the Raptor with the F-X program.

The F-15E Strike Eagle is the long-range heavy hitter of the Air Force’s fighter fleet. The Air Force has 213 of these dual-role fighters, which replaced the long-serving General Dynamic F-111 strike aircraft.

Unlike the air superiority–focused F-15C/D from which it was derived, the Strike Eagle is primarily a strike aircraft. It has far greater range and payload capacity than any other fighter in the Air Force inventory. But even with the added air-to-ground role, the F-15E remains a respectable fighter—especially in beyond-visual-range engagements.

The F-15E, like many aircraft in the Air Force’s ageing inventory, will continue to serve well into the 2030s. The service is upgrading the jets with new Raytheon APG-82 active electronically scanned array radars and other modern hardware, but a number of pilots complained that foreign versions of the jet are far better equipped. Meanwhile, while the upgrades will keep the Strike Eagle relevant into the 2030s, the Air Force has no plans to replace the venerable jets.

Originally, the Air Force had hoped to replace the Strike Eagle with a version of the F-22 Raptor, but those plans died when then defense secretary Robert Gates cancelled that program. One senior Air Force official suggested that the service should extend the production of the future LRS-B stealth bomber to fill the gap—but said that was his personal opinion, rather than service policy.

While often overlooked, what makes the U.S. Air Force unique amongst the world’s air forces is its ability to hit targets around the globe. The KC-135 aerial refueling tanker is what enables American air power to conduct its missions. That’s not just for the Air Force; the Navy and Marine Corps’ aviation assets are also dependent on the air arm’s “big wing” tankers to carry out their missions.