The U.S. Army Can't Get Ambushed by the Future 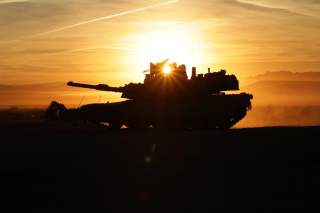 When U.S. forces begin the destruction of the Islamic State, it will defend its territory—its so-called caliphate—and “hold ground.” Without air and missile defenses, or rocket artillery and mobile armored forces with accurate, devastating firepower, “holding ground” is the only option. U.S. air and ground forces with token “allied and partner” participation will methodically grind Islamic State fighters out of existence. “Holding ground” will be a death sentence for ISIS.

However, the destruction of ISIS belongs to the past; battles between the U.S. armed forces and insurgent enemies without armies, air forces or air defenses. Future battle will be different.

Recent events in eastern Ukraine, Mesopotamia and the western Pacific suggest the potential for conflicts in regions where major wars incubated in the past. When and how these wars will break out is difficult to predict, but the trend lines suggesting how they will be fought are visible now.

The skies over the battlefield will be crowded with loitering munitions and unmanned aerial vehicles. These agile cruise missiles are designed to engage beyond line-of-sight ground targets. With proximity-fused, high-explosive warheads, these systems will remain airborne for hours, whether day or night. Equipped with high-resolution electro-optical and infrared cameras, enemy operators will locate, surveil and guide the drones to targets on the ground—U.S. ground forces.

When these loitering missiles are integrated into the enemy’s strike formations, armed with precision-guided rocket artillery that fires high-explosive, incendiary thermobaric warheads, including submunitions with self-targeting antitank and antipersonnel munitions, warfare as we know it changes. The rockets fired from just five Russian BM-30 Smerch launchers can devastate an area the size of Central Park. At the same time, integrated air defenses will protect the strike formations from U.S. air and missile attack while enemy armored forces maneuver to exploit the chaos and close in with accurate, devastating direct fire from automatic cannon, antitank guided missiles and high-velocity guns.

Imagine the impact of the aforementioned events on the contemporary Army’s thousands of paratroopers and air-mobile or truck-mounted infantry. The consequences for gas-guzzling “upgraded” tanks and infantry fighting vehicles designed in the 1970s will be no less profound. Without integrated air and missile defenses to protect them from top attack, or their own precision-strike capabilities to counter the enemy’s strikes, the mix of enemy capabilities employed as described will crush them too.

None of this is news inside the Pentagon. In the building, it’s an open secret that without a strategic reset, today’s Army ground forces are ambulatory patients lining up for rescue by American air power. The problem is that the U.S. Air Force is already overstretched. U.S. air power must also contend with the proliferation of lethal air-defense technologies in combination with electronic warfare—a recipe that can degrade, and in some cases negate, the effects of America’s precision-strike weapons, GPS-based navigation and guidance systems.

Twentieth-century warfare taught that armies are more often defeated by dogma based on earlier successes than by the skill of new enemies. The last century also taught the importance of integrating new, survivable warfighting capabilities inside new, highly mobile organizational constructs at progressively lower levels. Unfortunately, the possibility that the U.S. Army’s 1942 organizational constructs—brigades, divisions and corps—may be the wrong answer to twenty-first-century opponents is anathema to the Army’s three- and four-star generals. This is why more money without new leadership won’t fix the Army.

During a February 27 meeting at the Lexington Institute, Maj. Gen. David Bassett, Army Program Executive Officer for Ground Combat Systems, said, “Sometimes I’m asked, ‘do you really think it’s a good idea to keep the Abrams tank until 2050?’ No, [but] you develop a strategy for the resources that you have. . . . What we haven’t done is give you a strategy for the resources that we don’t have.”

Informed and courageous civilian leadership with a fresh set of eyes is needed to develop a new modernization strategy tied to a new twenty-first-century Army. Otherwise, there is no guarantee that the U.S. Army’s high-profile, multibillion-dollar acquisitions graveyard will not continue to grow exponentially, with more failed programs like the Ground Combat Vehicle, Armed Aerial Scout, and the staggering foray into science fiction with the $20 billion Future Combat System.

First, the new secretary of the army must focus on streamlining the Army’s overhead and building more ready, deployable fighting power at the lowest level. Consolidate multiple four-star commands (Training and Doctrine Command, Army Materiel Command and Army Forces Command) into fewer three-star commands (Training and Readiness Command and Doctrine and Materiel Command). Demand that the U.S. Army explore cross-domain C2 with the air and naval forces for integrated “All Arms/All Effects” warfare. In future conflict, there will be no time for a pickup game—the lashing together of dozens of single-service headquarters.

Second, the secretary must insist on full-spectrum rapid prototyping of new operational capabilities—organizing construct, human capital strategy and equipment, not just the technology. End the wasteful practice of making the old force fight better by tinkering on the margins of obsolete World War II formations. Put differently, prepare for the future in western Russia now, not in ten years. Organize new formations around the joint warfighting functions of ISR, STRIKE, maneuver and sustainment for integration with aerospace and naval power.

Third, stop Army forces from modernizing in isolation from the aerospace and maritime forces. Demand that the Army explore mature technologies already in use in other services that facilitate unity of effort across service lines.

Fourth, in January 2016, the National Commission on the Future of the Army recommended piloting an initiative called the Reconnaissance Strike Group (RSG), a six-thousand-man formation under a one-star. The current version of the FY17 NDAA directs the JCS chairman to establish an RSG office, to model, assess and report to the Senate Armed Services Committee on the RSG. The RSG is what Clayton Christensen described in his book The Innovator’s Dilemma: a special-purpose organization designed to lead change by exploiting new but proven technologies in a joint, autonomous setting. Use the RSG to make Army experimentation and innovation routine, not exceptional.

Fifth, look to defense industries in Germany, Israel, Sweden and other friendly or allied countries for new platforms and technologies that can be rapidly prototyped, modified and eventually, manufactured on U.S. soil for the U.S. Army. The reason is simple: U.S. defense industries are behind because they evolved to mimic the industrial-age client they serve. If the U.S. Army is to attain cutting-edge platforms for overmatch in future battle, it must look beyond American borders for the solutions.

In military affairs, new facts should lead to changes in military strategy, organization and tactics, but that’s not always the case. After the totally unexpected loss of fifteen thousand British soldiers in the first week of World War I and the onset of trench warfare, Britain’s minister of defense, Field Marshal Kitchener, exclaimed, “I don’t know what is to be done—this is not war!”

Colonel (ret) Douglas Macgregor is a decorated Army combat veteran, a PhD and the author of five books. His newest is Margin of Victory: Five Battles that Changed the Face of Modern War, available from Naval Institute Press.