The U.S. Army Should Pursue a Counter-A2/AD Mission 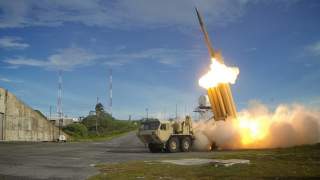 This week at the annual Association of the U.S. Army (AUSA) conference in Washington D.C. Secretary of Defense, Chuck Hagel, turned heads when he used his keynote address to call on the Army to develop a modern coastal defense force. Harkening back to the 19th century when Army forces protected America's coastlines and during World War Two when they defended key outposts in the Pacific, Hagel recommend the Army “broaden its role (in Asia-Pacific) by leveraging its current suite of long-range precision-guided missiles, rockets, artillery and air defense system” which could “provide multiple benefits...such as hardening the defenses of U.S. installations; enabling greater mobility of Navy Aegis destroyers and other joint force assets; and helping ensure the free flow of commerce.”

I have previously written on this topic, but it is not a new concept and I am certainly not the first to articulate it. For the last several years, from our think tanks to our War Colleges, various thinkers have come to a similar conclusion. Given the range of counter-intervention - or anti-access/area-denial (A2/AD) - capabilities and concepts of operation being developed by China to inhibit U.S. power projection forces, I believe there are great advantages for the joint force and our partnerships in the region if the Army were to stand-up a land-based sea-control force that could be deployed along the Asian littorals.

To achieve this vision of contributing to a counter-A2/AD strategy, the Army should focus on two key missions:

The Army can enhance strategic stability by improving its Air and Missile Defense (AMD) capabilities. The missiles of China’s Second Artillery Corps have the range to reach most U.S. bases throughout the region. While hardening and dispersing U.S. facilities in the Western Pacific will always be a part of the equation, the Army can further contribute to joint force survivability by improving the capabilities of its AMD systems like Terminal High Altitude Area Defense (THAAD) or Patriot. Making AMD platforms more mobile, concealable, and situationally aware will be critical investments for future contested environments. A land-based electromagnetic rail-gun or, eventually, directed energy capabilities such as high-power lasers should also be considered by the Army as a way to reduce the costs of successful defense against salvos of precision-guided munitions.

In addition to air and missile defenses, the Army should look to its legacy forces as well as available systems to stand-up an offensive missile forces. Positioning both mobile and fixed ground-based missile batteries in theatre, while also increasing the range of those systems and acquiring anti-ship missiles (ASM), will allow the Army to contribute to regional stability by deterring adversaries from operating near partner states—subjecting enemy land- and sea-based anti-access and area-denial (A2/AD) forces to greater risk. The Army’s existing expertise in missile defense, rocket and missile systems for offensive precision fires, and partner-capacity building make it a natural choice to spearhead the cultivation and integration of partner, mobile and fixed ground-based missile batteries in theater that would contribute to regional stability and offset current strategic advantages by the People’s Republic of China (PRC) in the region. In short, an offensive missile force would give the Army the ability to protect U.S. and allied interests, engage regional partners, and conduct cross-domain operations that could constrain and deter aggression in the region.

The Army is already considering the idea. In 2013, it sponsored a RAND Corporation study that explored the potential military and diplomatic advantages of acquiring ground-based ASMs and deploying them along the waterways of the Western Pacific. The subsequent study, “Employing Land-Based Anti-Ship Missiles in the Western Pacific,” concluded that because “China depends heavily on freedom of the seas for trade and, increasingly, to pursue its territorial and other interests….A U.S.-led coalition defense strategy in the Western Pacific should focus on these critical waterways.” It went on to recommend that the U.S. “develop a ground-based anti-ship missile capability to exploit the advantage of these systems in an operational context and to facilitate security cooperation with partner nations in the region.”

Pursuant to the recommendations of the RAND report, I recently sent a letter to the Army Chief of Staff, General Ray Odierno, encouraging the Army to further study how fielding ASMs would affect the regional, political, economic, and military dimensions of relations in the Asia-Pacific as well as what would need to be done to establish the appropriate force structure, doctrine, concept of operations, and other requirements to support an offensive, sea-control mission.

Investing in sea-control forces on the land may seem like a misnomer in an era when U.S. forces are perceived to have assumed almost absolute command of the seas. However, China’s own Mahanian-drive for naval power to challenge U.S. and allied forces across its near-seas demands that we consider cross-domain opportunities to sustain access along the Asian archipelago. As Secretary Hagel has noted, the Army has a real opportunity to lead this mission.

Rep. Forbes is Chairman of the House Armed Services Seapower and Projection Forces subcommittee. You can follow him on Twitter: @Randy_Forbes.