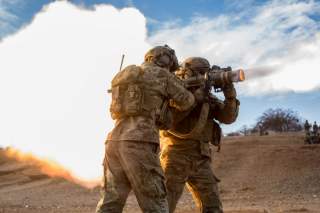 In the May 1954 issue of the U.S. Naval Institute’s Proceedings magazine, Dr. Samuel Huntington, a young scholar slated to make his mark as one of the most influential political scientists of the next half-century, penned an eloquent and direct challenge to the military services. Huntington observed that when there are major changes in the principal threats to a nation, these changes “must be met by shifts in national policy and corresponding changes in service strategic concepts.” Moreover, as the U.S. military services struggled to define their roles in national security policy following the Korean War, Huntington insisted, “the resources which a service is able to obtain in a democratic society are a function of the public support of that service. The service has the responsibility to develop this necessary support, and it can only do this if it possesses a strategic concept which clearly formulates its relationship to the national security.”

In other words, each military service isn’t guaranteed a ‘fair-share’ of the budget indefinitely, but a level of resourcing commensurate with the strategic contribution it can make toward the security of our nation.

It is a sensible argument, but its implications will inevitably have disruptive impacts on organizations and budget plans. Just as it did in the 1950s, the United States is now facing a shifting security environment that will require our military to adjust its focus in new directions. We are seeing the emergence of an international system that places a renewed emphasis on great power competition different from the last decade’s counterinsurgency-focused land wars in South Asia and the Middle East that consumed our Nation’s attention.

More specifically, the growing importance of the Asia-Pacific region to our national interests, and the peacetime competition that is emerging with the People’s Republic of China, have prompted a natural debate among U.S. defense experts and policy makers about the roles and missions of our military in the decade ahead. Many have chosen to view changes needed to adapt to this competition as threats to the current order of things, including the size and shape of the Army and Marine Corps. Instead, I believe this is a moment of opportunity for the services, just as Huntington encouraged, to sharpen their arguments and make the most compelling case to the American people for the utility they can offer our national security policy in the second half of this decade and beyond. Indeed, what could be more American than a robust, transparent discussion amongst the Army, Marine Corps, Air Force, and Navy?

This debate has already resulted in some tangible shifts in the recent FY2015 budget request and 2014 Quadrennial Defense Review, such as greater attention to resourcing a healthy balance of military power and capabilities in the Asia-Pacific. However, change has been slow, the means to achieve this objective are mired by budget sequestration cuts, and the services remain trapped in an egalitarian mentality resistant to prioritizing the investments necessary for success in future war-fighting environments.

Given the maritime nature of the Asia-Pacific region, I have written and spoken often on the critical importance of robust seapower and projection forces capabilities for maintaining regional stability and continued access to the global commons, including the region’s littoral areas. Yet just because the future emphasis of our military is likely to change does not mean, as some are content to conclude, that this must be a zero-sum game between our maritime forces (the Navy-Marine Corps team) and our land forces (the U.S. Army). In fact, the Army could offer unique capabilities that, if further developed, will play a critical role in protecting American and allied interests in the Asia-Pacific region in the coming decade. More specifically, in addition to the opportunities for greater engagement with regional partners ashore during peacetime, the Army could posture itself to make serious contributions to America’s cross-domain wartime operations.

What are the current shape and character of the Army’s Asia-Pacific contribution? It is easy to forget that the Army already has thousands of soldiers stationed west of the International Date Line providing deterrence, logistics support, and training. This includes 18,500 soldiers in Korea, 2,400 in Japan, 2,000 in Guam, and 480 in the Philippines, in addition to forces in Hawaii and Alaska that are devoted to supporting U.S. and partner activities in Pacific Command’s area of responsibility. Indeed, the Army does not need to “rebalance” to the region because it has been there operating for decades.

As I have written before, greater emphasis on the Asia-Pacific allows the Marine Corps to return to its amphibious roots after essentially functioning as a second land army in Iraq and Afghanistan over the previous decade. But for its part, the Army has a number of opportunities to offer substantial and varied capabilities in support of U.S. regional interests:

1. Shift Army planning and capabilities towards land-based offensive systems. While the Army has spent the past decade focused on counterinsurgency and stability operations, it should shift more resources towards creating new, land-based ballistic and cruise missile forces. Positioning both mobile and fixed ground-based missile batteries in theatre, while also increasing the range of those systems and acquiring anti-ship missiles, will allow the Army to contribute to regional stability by both deterring adversaries from operating near partner states—subjecting enemy land- and sea-based anti-access and area-denial (A2/AD) forces to greater risk. This would have to be done in partnership with regional allies, but an integrated web of A2/AD systems among allies would greatly increase the costs of any hostile action in the region. The Army’s existing expertise in missile defense and partner-capacity building make it a natural choice to spearhead the cultivation and integration of partner, land-based A2/AD networks that would constrain and deter Chinese aggression in the region by using the very same tools they are using to dissuade us from maintaining our presence and intervening in regional crises.

2. Expand contributions to air and missile defense. In addition to a more offensive role, the Army can enhance strategic stability in the region by improving its Air and Missile Defense (AMD) capabilities. The missiles of China’s Second Artillery Corps have the range to reach most U.S. bases throughout the region. While hardening and dispersing U.S. facilities in the Western Pacific will always be a part of the equation, the Army can further contribute to joint force survivability by improving the capabilities of its AMD systems like Terminal High Altitude Area Defense (THAAD) or Patriot. Making AMD platforms more mobile, concealable, and situationally aware will be critical investments for future contested environments. A land-based electromagnetic rail-gun or eventually directed energy capabilities such as high-power lasers should also be considered by the Army as a way to reduce the costs of successful defense against salvos of precision-guided munitions.

3. Improve ties with partner states and grow their capacity. Partnership is the game in the U.S. Pacific Command, whether for deepening security relationships or improving interoperability for future humanitarian assistance and disaster response missions. Ground forces are an important component of our partner states’ security strategies, and increasing cooperation between U.S. and other ground forces should only help solidify a more collaborative relationship between the United States and its Asia-Pacific allies. Joint regional exercises like COBRA GOLD and BALIKATAN improve joint operability between states while building the capacity U.S. partners need to feel more secure; these exercises should be preserved and expanded in productive ways.

4. Improve mission support capabilities. Army forces in the Pacific include diverse mission support groups, including combat trainers, Civil Affairs units, engineers, logisticians, military intelligence, Special Operations Forces, and Foreign Area Officers, among others. These components support and/or augment the capabilities of PACOM forces and partners. The Army’s Surface Deployment and Distribution Command, as part of the U.S. Transportation Command, also sustains forward-deployed forces throughout the Asia-Pacific. In addition, the Army pre-positions supplies and equipment afloat or on shore for use in contingency scenarios. Though these Army activities may not receive as much attention as others, they undergird any U.S. joint and combined deployment or exercise in the region. Improving logistical interoperability within the services and with Asia-Pacific partners will enhance our ability to respond to peacetime and wartime contingencies in the region.

The rise of China’s antiaccess network is shaping the principle threats to the United States in ways that demand, as Huntington tutored, shifts in national policy and the strategic concepts driving our military services. Let me be clear that I believe the Army’s ability to seize and hold large portions of land will remain an enduring core competency fundamental to preserving options for future policy makers. However, alongside its traditional missions the Army must consider concepts and capabilities for imposing costs and providing affordable theater defenses that will allow it to contribute to maintaining peace and stability in critical regions like the Asia-Pacific.