The U.S. Army's 'New' Command Is a Repackaging of Old Failures 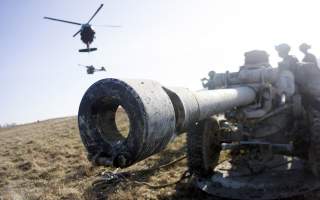 The U.S. Army recently announced the creation of a new modernization command run by a three-star general that would serve as a “realignment of modernization responsibilities under a new organization.” The goals of this organization sound impressive. It is when one looks beneath the surface, however, that it becomes apparent this “new” command represents little more than a repackaging of old structures. Without major changes, the Army will likely continue its two-decades long drought of modernization failures—and the risk to U.S. national security will rise.

A letter signed by Army Chief of Staff Gen. Mark A. Milley explained that the Army had to set up a new command because the service under his leadership “is not institutionally organized to deliver critical capabilities to Soldiers and combat formations quickly. Our current modernization system is . . . insufficient to ensure future overmatch.” What he does not explain, however, is how this new command will succeed where the Army’s existing structure failed over the past two decades.

The Army already has a dizzying array of modernization commands. At the top is the four-star Training and Doctrine Command (TRADOC) whose mission is to “change the Army to win in a complex world” and to “design, acquire, and build the future Army, and to constantly Improve it.” Under TRADOC, there is an organization run by a three-star general called the Army Capabilities Integration Center (ARCIC), whose mission is to think “clearly about future armed conflict and develop a sound conceptual foundation for Army modernization” and “prioritize solutions to ensure that our Army has the capability and capacity to accomplish future missions.”

Under ARCIC is yet another organization, this one run by a one-star general, called the U.S. Joint Modernization Command (JMC), charged with conducting “operationally realistic and rigorous” field exercises to experiment with future concepts that will “improve the combat effectiveness of the Joint Force.” Yet all of these organizations have cumulatively failed to produce every attempt to upgrade the the 1970s equipment the Army continues to rely on or modernize warfighting organizations.

The Army last attempted a major modernization program that began with a 1999 speech by former Army Chief of Staff Gen. Erik Shinseki, later to become known as the Future Combat Systems. Despite repeated warnings of looming failure from the Government Accountability Office and analyses I wrote in 2005 and 2008 in the Armed Forces Journal, the Army tried to force Future Combat Systems to work. The results were disappointingly predictable: In 2009, then-Secretary of Defense Robert Gates canceled the program. All attempts to modernize the armored fleet since 2009 have likewise failed.

What the U.S. Army modernization commands were unable to do, however, the Russians did. In 2008 Russia began a military modernization program that military expert Maksym Beznosiuk said was intended “to address the technological and organizational weaknesses of the Russian military,” which were exposed during the short conflict with Georgia. In terms of the “transformation of force structure, the cumbersome divisions usually involved in fighting on a long frontline were disbanded in 2009 to be replaced by smaller in size but more agile and better prepared brigades.”

Russians needed only six years to design, test and then start producing technologically advanced combat vehicles, highlighted by the Armata T-14 tank and T-15 personnel carrier. Both employ state-of-the-art armor, cannons and fire control systems. The T-14 in particular appears to be just as survivable and deadly as the U.S. Abrams tank.

Simply stated, the United States cannot afford to continue drifting inconclusively into a future in which other world powers are decisively improving. The U.S. military has enjoyed a dramatic conventional advantage over the rest of the world for decades. That gap is shrinking by the year, owing in part to our inability to deliver on modernization programs.

The reason the majority of the Army’s modernization efforts have failed is not because of weaknesses in how three successive echelons of Army commands have been organized. It has instead been caused by a failure of the service’s top leaders to select and then execute a realistic and effective modernization program. Simply rearranging how TRADOC, ARCIC and JMC are organized by forming a “new” command will not solve this decades-long systemic failure.

There is, however, fresh thinking from outside the Army that has a chance to solve the problem. Section 1091 of the FY17 National Defense Authorization Act directs the Chairman of the Joint Chiefs of Staff to evaluate a new fighting organization and doctrine, called the Reconnaissance Strike Group, which was designed by retired Army Col. Douglas Macgregor (full disclosure: I fought with Macgregor in Desert Storm).

Instead of replacing systems inside the Army’s existing organization for combat brigades, divisions and corps used since World War II, the Reconnaissance Strike Group construct includes new combat formations expressly designed to account for modern weapons, technology and likely enemy capabilities. It employs cutting-edge technology that exists today and could be deployed right now—if only the leadership and political will existed to do what’s right to strengthen the Army.

If the Army stays on its current plan, then the new modernization command won’t even be established until next summer—and it is unknown how long after that before any functional modernization plans will be announced. Were the president to adopt the Reconnaissance Strike Group concept, however, within five to eight years, the U.S. Army could have four six-thousand-men strike groups equipped with the most modern and survivable combat vehicles. The strike groups would be fully fielded and ready for action. Such a force could provide enough combat power on its own to defeat a Russian advance into the Baltics. Unfortunately, as I observed throughout my twenty-one-year career in the Army, the service’s senior leaders typicaly reject any solution that is not of their own creation. It will likely take the president or secretary of defense to step in and insist the Army put into action this new construct.

The Russians succeeded where the Future Combat Systems failed, and their inventory of modern tanks that can challenge American power continues to grow, shrinking by the day the advantage that the United States once had over them. Let us not pass this opportunity to prove that American leadership and knowhow can produce a superior, modernized force—and rebuild the capability gap between United States and Russian forces in favor of America.