The U.S.- China Rivalry Has Asia on Edge: Can "Middle Powers" Create Stability? 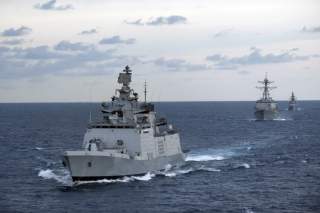 Between them, India and Australia would stand a good chance of involving Indonesia in a three-way security dialogue, and perhaps eventually a maritime surveillance regime focused on the approaches to the strategically vital Malacca, Sunda, Lombok and Makassar straits. India could also use its ties with Vietnam, and Australia and its long-standing defense links with Singapore and Malaysia, to encourage those states towards a more region-wide approach to security cooperation.

Together, India and Australia could also encourage Tokyo to continue its defense “normalization,” while helping it find ways to separate present policy from negative historical baggage. At the same time, India, Australia and other partners would form a ready-made grouping to work with the Chinese navy on issues like disaster relief, search and rescue and counterpiracy.

For Australia, such initiatives would fit well with Canberra’s efforts to deepen Asian security partnerships alongside the U.S. alliance. Questions about whether Australia is an “Asian” security actor are well out of date. Moreover, a prominent role for Australia in Indo-Pacific coalitions that did not include the United States would confirm that its robust U.S. alliance is not an obstacle to prosecuting an independent foreign and security policy in the region.

For India, the stakes are even higher. Building Indo-Pacific coalitions of middle powers could well become a critical element of a strategy to cope with the power shift in Asia and the uncertain evolution of U.S.-Chinese relations. This would help Delhi relieve the tension in its policy between seeking to balance a rising China, while avoiding an entangling alliance with the United States. The recently elected Modi government has a major opportunity here. Its election manifesto did not speak of nonalignment; it called for the creation of a “web of allies” to further India’s interests.

India’s strategic cooperation with the middle powers of Asia is likely to win greater domestic support than a strategy based mainly around partnership with the United States. It will also be less vulnerable to Chinese propaganda that regional security cooperation is nothing more than a part of Washington’s effort to contain Beijing. Such an approach will help Delhi break free of the tension between strategic balancing and the legacy of nonalignment. Crafting “middle-power coalitions,” as a complement to engaging China and deepening strategic partnership with America, would enjoy domestic political support, while creating the basis for expanding India’s role in Asian security.

C. Raja Mohan (@MohanCraja)  is head of strategic studies at the Observer Research Foundation, New Delhi, and a nonresident fellow at the Lowy Institute.

Rory Medcalf (@Rory_Medcalf) is director of the international security program at the Lowy Institute and a nonresident fellow with the Brookings Institution.