The U.S-China Showdown at Mar-a-Lago: How Trump Undercut Xi 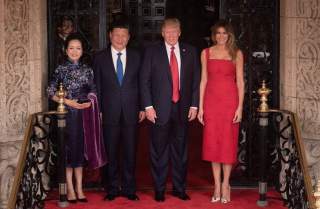 “We have made tremendous progress in our relationship with China,” said President Trump on Friday, after meeting his Chinese counterpart Xi Jinping in Mar-a-Lago. “We’ll be making a lot of additional progress. The relationship developed by President Xi and myself I think is outstanding.”

Is this what it sounds like: typical Trump hyperbole?

Perhaps not. It looks like the American leader, during the two-day get-together in Florida, changed Sino-U.S. ties for the better—from the American perspective. Trump, in a few short hours, put Xi in his place, cut the ambitious autocrat down to size, and maybe pushed the Chinese state in better directions.

It is true that the air is now full of talk of the beginning of a new era of cooperation with China, and Americans have heard this before. Fresh U.S. administrations always try to establish friendly relations with Beijing. Most U.S. leaders, at least at the start of their terms, actually believe what they say in this regard.

Trump, despite all the fluffy language, looks like an exception. More than any other American president in recent memory, he thinks about international relations like the Chinese, seeing nations in a permanent struggle for dominance.

The forty-fifth president, seeking dominance, turned a well-laid Chinese trap into a debacle for Xi instead. Xi’s diplomats, especially State Councilor Yang Jiechi and Cui Tiankai, ambassador to Washington, pushed for an early meeting with Trump. China’s Washington watchers evidently thought that, by acting early, they could set parameters for the new American president, who had yet to settle on his China policy.

The Chinese plan was bold, well planned and well executed. It had, therefore, a high probability of success. But then it ran into one Donald J. Trump.

Trump, the host at Mar-a-Lago, arrived in the Florida sun about an hour after Xi Jinping’s plane touched down. That maneuver, among other things, made Xi look like a supplicant. Trump’s late arrival is reminiscent of Gen. Douglas MacArthur ordering his pilot to circle Wake Island in October 1950 so that President Truman would have to land first.

And don’t think the Chinese are okay with their president landing first. Apart from the Kim family of North Korea, there may be no group of people on earth more concerned about appearances and diplomatic protocol than Chinese Communist Party officials. If you doubt that, remember the “stairs incident” that ensued when President Obama landed in Hangzhou last September for the G-20 meeting.

President Xi, unlike Obama, got stairs on arrival, but things went downhill as soon as Trump landed. Chinese netizens, who notice everything, then commented on how Trump’s welcome of their leader seemed less than enthusiastic. Japanese prime minister Shinzo Abe famously received a nineteen-second handshake at a White House photo op in February. Xi, on the other hand, got a perfunctory gesture of welcome.

The biggest embarrassment for Xi, however, was yet to come. At the end of dinner on Thursday, Trump personally informed him that he had ordered a missile strike on Syria’s Shayrat Air Field. A few moments later, the American president announced the action to the world.

According to Secretary of State Rex Tillerson, the Chinese autocrat was on board with the strike. “President Xi,” the American diplomat told reporters at a briefing Friday afternoon, “expressed an appreciation for the President letting him know and providing the rationale and said, as it was told to me, indicated that he understood that such a response is necessary when people are killing children.”

So we are supposed to believe that Xi was on board with Trump hitting a Chinese friend and partner with fifty-nine Tomahawks? That is unlikely, to say the least, but in any event Trump added insult to injury by not waiting a few hours for Xi to leave Mar-a-Lago before ordering the strike.

“For the Chinese, the atmospherics of the talks will be as important as the substance,” wrote Jane Perlez of the New York Times shortly before the event. Xi Jinping’s “goal,” she wrote, “will be to get through the quick visit looking like a resolute leader who can hold his own against the American president.”

On that score, Xi failed.

Xi’s failure to respond to Trump, to fail to defend his country’s interests in Syria, is bound to have consequences back home. The Chinese supremo built a career by looking strong and dominating opponents, but Trump, Xi’s opponents will say, humiliated China. In the eyes of Communist Party cadres, the American president made Xi appear weak.

This is not a good time for China’s strongman to appear weak. He is thought to be looking to stay for a third term as general secretary, breaking decades of institutionalization of collective rule and returning to Maoist-style leadership.

His ability to stay on is dependent on his making sure no successor is designated. And at this crucial time he needs to pack the Party’s Politburo Standing Committee with supporters by ignoring the “seven up, eight down” rule, which makes anyone sixty-eight or older ineligible for a new term on the Standing Committee.

Xi’s fate will in large measure be decided at the Nineteenth Party Congress, which will probably be held in October or November.

At the moment, Xi dominates the political landscape, but he has, like any senior figure, made enemies along the way. In fact, he has made more than most, as he has been responsible for jailing or sidelining an unprecedented number of officials.

So Xi can count as adversaries the families of the jailed, anyone allied to those jailed, anyone fearing jail, anyone with dealings with those who may be jailed, anyone who knows anything about Xi’s family—and anyone not named Xi. When a political figure strives to create a one-man system, and then make himself the one man in that system, everyone is a potential adversary.

Chinese state media stayed away from attacking Trump’s Syria strike while Xi was still at Mar-a-Lago, but it has now begun what may be a relentless assault on the U.S. leader for this move. In time, the media could also attack the man who did not stand up to Trump when he had the chance: Xi himself.

Xi, therefore, made himself look impotent. Others, because they sense impotence, might pounce. Moreover, Xi, for his part, now has an incentive to purge those who thought it was a good idea that he go to Mar-a-Lago in the first place. Consequently, the Chinese political system is going to become even more turbulent.

“Chinese people associate a leader’s image with the ability to rule,” said Zhang Ming of Renmin University to CNBC, in connection with the Mar-a-Lago summit. “If he doesn’t have a good image, there will be trouble.”

So, in China, expect trouble.