The U.S.-China 'Thucydides Trap': A View from Beijing 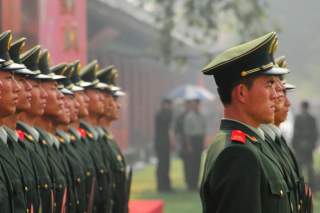 “It was the rise of Athens, and the fear that this inspired in Sparta, that made war inevitable.” —Thucydides

China’s rising comes as the most pronounced but complicated feature of the twenty-first century. In the past few years, people over the world, especially in the Asia-Pacific region, have witnessed increasing tensions in U.S.-Chinese relations, from all levels and in a wide range of areas. Graham Allison, a world-famous expert on international security and also the founding dean of the Kennedy School of Government at Harvard University, was the first person to combine the concept of the “Thucydides Trap” with the analysis of China’s ongoing rise, with recent commentaries published in global influential newspapers and websites such as the Financial Times, the New York Times and the Atlantic. In those articles, he warned that over the past five hundred years of human history, twelve of all sixteen cases of global tensions resulted in shooting wars. What’s more, he argued that a Thucydides trap has arisen between the United States and China in the western Pacific in recent years. Thereafter, some world-class masters, including Zheng Yongnian, Robert Zoellick, Zbigniew Brzezinski, Patrick Porter and T. J. Pempel, followed in using this popular term when talking about U.S.-Chinese relations today or in the years ahead, regardless of their personal attitudes toward such a pessimistic term.

Its impact was so great that China’s President, Xi Jinping, had to respond to it publicly once again during his state visit to the United States, when he delivered an address to local governments and friendly groups in Seattle. He presented himself as a constructivist IR scholar, in the eyes of skeptical American realists, by emphasizing the importance of mutual intentions and interactions while rejecting the pessimistic prospect of bilateral relations projected by the widespread identification of a so-called “Thucydides Trap” between the two countries.

Unfortunately, it is the constructivists that always remind us that either discourse or prediction might be a self-fulfilling prophecy. Most scholars in China reject the so-called metaphor from history and regard this simplistic historical analogy as the newest vision of the longstanding “China Threat Theory.” However, from an academic point of view, theoretical and empirical analysis is still necessary. Objectively speaking, the widespread use of the term “Thucydides Trap” just indicates a period when a rapidly rising power has obviously narrowed the gap between itself and the system’s dominant power, simultaneously stirring up fears and anxieties in other countries that are satisfied with the existing distribution of power. As Allison himself puts it, the two crucial variables are rise and fear.

The real risk associated with the “Thucydides Trap” is that business as usual—not just an unexpected, extraordinary event—can trigger large-scale conflict. War is not destined, though risks undoubtedly become very high compared with other periods in the bilateral relationship. Similarly, it implies a period in which all countries, especially emerging and ruling powers, should be very cautious in dealing with their relationships and divergences if neither has any intentions to embark upon a devastating war. We will now illustrate the concrete scenarios of the gathering “Thucydides Trap” between the two giants.

On the Systemic Level: A Battle over Rules?

Some observers of U.S.-China relations describe the most prominent features of bilateral relations in 2015 as a battle over rules. The most important element of an international system is defined by its key norms and rules. As Allison has pointed out, the defining question of global order in the decades ahead will be whether China and the United States can escape the Thucydides trap. In the eyes of sensitive Americans, China’s ambitious “Belt and Road” strategy was nothing more than a parody of the Marshall Plan. Additionally, China’s global efforts to set up the Asian Infrastructure Investment Bank encountered resistance from an implicit U.S.-Japanese joint-led coalition. Generally speaking, a battle over rules is visible from both the security and economic dimensions.

In the dimension of security, the most eye-catching problem is the still escalating dispute over the freedom of navigation (FON) and overflight in the South China Sea. It has been a longstanding dispute between the two countries, and has already caused severe crises in 1994, 2001 and 2009. This time it was reinvigorated by China’s unparalleled artificial island construction in the South China Sea, in response to the deliberate provocations of the Philippines and Vietnam. For China’s part, its actions are justifiable to defend its territorial integrity without any room for retreat, when considering surging public opinion and the very high political audience cost that the Chinese government has suffered.

However, on the side of the United States, as the asymmetric theory of IR has suggested and Assistant Secretary of State for East Asian Affairs Daniel Russell has repeated on several occasions, it is not a matter of rocks but rules. U.S. officials believe that its position on FON is universal rather than directed against a specific country, and the United States has been conducting FON operations in many regions, and against many countries of concern, since the 1980s. If it does not react to China’s island construction in the South China Sea with enough toughness, it will consequently send signals to its allies and the world at large that the United States admits its decline and is appeasing China, which will seriously erode the international order built by its overwhelming hegemonic power after World War II and damage its reputation as the leading power of East Asia, not to mention that the Philippines is its formal military ally with clear military obligations. It seems unlikely that either China or the United States will compromise. Given that the United States has promised to continue its cruises and overflight operations within the twelve nautical miles of China’s islands, and that senior military officials have intermittently delivered harsh speeches, the accidental risk of military conflict persists.

In the economic dimension, the Trans-Pacific Partnership is a perfect example. Benefiting from its entrance into the WTO, China’s economy has doubled several times since then, while the U.S. economy was exhausted by its two global wars on terrorism. After the 2008 financial crisis, there emerged a widespread perception (perhaps just a misperception) that in East Asia, a dual-center structure was emerging, in which the United States remained the traditional security center while leaving its place to China as the new economic center. Ever since the financial crisis, Americans have been in a state of unconfident anxiety, watching China’s diplomacy turn from keeping a low profile to striving for achievement. To secure its leading position in the region, the Obama administration is eagerly promoting a new free-trade agreement with high standards in the Asia-Pacific, closed to China in the negotiation stage, as an important component of its “Rebalance Strategy.” Therefore, there are two approaches to regional trade and investment liberation, that is, the coexistence of the negotiation processes of both TPP and RCEP, which are strongly backed by the United States and China respectively. The true story of the struggle between TPP and RCEP can be interpreted as a strategic rivalry on economic rules between the two countries. In other words, the two FTAs’ explicit frameworks reflect the implicit dual centers of the power structure in the region. As President Obama expressed publicly in his 2016 State of the Union speech, with TPP, China doesn’t set the rules in the region—the United States does. Of course, the complex effects on U.S. domestic politics make the prospects of this battle much fuzzier than those in the security dimension mentioned above.

On the Regional Level: Third Parties and Indirect Structural Conflicts

The United States and China are not connected by land, and the Pacific between them is large enough to create a safe distance. But as the sole superpower, the United States is the military ally of many regional countries and has a treaty obligation to defend them when attacked, while many of those countries have disputes with China over maritime territories. In the cases of the China-Japan dispute over the Diaoyu Islands, and the overlapping territorial claims among five parties over the South China Sea islands and their surrounding waters, the United States became involved because of its alliances with Japan and the Philippines. After the United States announced its rebalance strategy, local countries also quickly launched their own visions of rebalance, in order to pursue their own interests. Through escalating the territorial disputes and getting the United States involved, Japan, under the lead of the Liberal Democratic Party, especially since Prime Minister Abe returned to power in 2012, is heading firmly towards its ambitious national goal to regain a normal state status by profiting from the strained atmosphere of U.S.-China relations. To prevent China’s return to the central position of the Asian power structure, Japan is much more active in containing China and interrupting its resurgence.

Similarly, Aquino in the Philippines did the same, out of fear that a much more stronger China would be less willing to compromise in the South China Sea. Under the endorsement and support of the United States, the legally controversial South China Sea arbitration initiated by the Philippines aims at pressing China to soften its policy through seriously damaging its national image before the global audience and deteriorating its neighboring diplomatic atmosphere with ASEAN countries, conversely arousing stronger nationalistic public opinion among the masses in China, and leading the Chinese government to be less compromising.