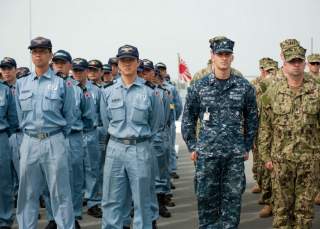 Asia is bracing itself for a tsunami of summit diplomacy. Much of the next fortnight will be dominated by a series of top-level meetings better known for their acronyms (APEC, EAS, ASEAN, G20) than their achievements. This is particularly true when it comes to managing hard security issues.

As twenty-one leaders gather in Beijing next week for the Asia-Pacific Economic Cooperation meeting, eighteen leaders descend on Naypyidaw, Myanmar for the East Asia Summit and conclaves centered on the Association of Southeast Asian Nations, and the Group of 20 leaders convene in Brisbane, the biggest security challenge may be that of safeguarding the heads of government. Tangible cooperation grappling with salient security challenges will be limited and indirect, and largely left to bilateral relations.

This is not to say that relevant security challenges will be left off the agenda of these summits. On the contrary, virtually everything will be covered in one way or another, from pandemics to poverty, from ISIS to complex crises, and from maritime boundaries to trade barriers. As important as these topics and lofty gatherings are, however, the practical effect of multilateral diplomatic exertions dissipates against the metric of tangible outcomes. These summits are apt to create better narratives than norms and generate more rhetoric than action.

When President Barack Obama returns from this punishing exercise in summit diplomacy, he should absorb the lessons from another high-altitude diplomatic event in November, a new forum dubbed the Mount Fuji Dialogue. Taking place on November 1-2, this new platform underscored a harsh reality, at least for this conferee: namely, that when it comes to protecting and building a prosperous, open and stable Asia-Pacific region, the United States is irreplaceable and Japan is indispensable.

The Mount Fuji Dialogue is modeled after the World Economic Forum in Davos, Switzerland and the Aspen Strategy Group seminars in Colorado. After being initiated in Tokyo by a speech from Prime Minister Shinzo Abe, two buses transported alliance architects, managers and analysts to the bucolic countryside resort of Hakone, in the vicinity of Japan’s volcanic icon and the dialogue’s eponymous mountain. On a clear day, Mount Fuji is a worthy rival to the Alps and the Rockies. But on the first weekend of this month, fog, overcast skies and rain prevented any weekend sighting of Mount Fuji. It was a fitting metaphor for the uncertain future security environment and a reminder of the Japanese proverb, “One inch ahead is darkness.”

The Mount Fuji Dialogue was conducted strictly off-the-record, but my main takeaway was transparent to all: the United States, Japan and the U.S.-Japanese alliance cannot be relegated to second-tier status. Amid the region’s diplomatic summitry, it is vital to remember that genuine security and prosperity for the two countries begins with overlapping interests and values and ends with an increasingly integrated set of economies and national-security apparatuses to help shape a dynamic Asia-Pacific region.

For all the elaborate moving and overlapping tectonic plates that comprise Asia’s security architecture, the U.S.-Japanese alliance remains the cornerstone of regional security. Sometimes clichés are true. In a time of heightened uncertainty and complex challenges, it is important to build on the sturdy foundation of an enduring relationship. Far from being a relic of the Cold War, the U.S.-Japanese alliance surprisingly remains America’s starting point for fashioning ways to seize precious opportunities and meet serious challenges in the twenty-first century.

For some in the region, this core belief in the alliance seems to indicate that the United States is trying to cling to primacy and Japan to major-power status, despite some unfavorable trends. But for those assembled including Joseph Nye and Rich Armitage, skeptics are too quick to dismiss the regenerative potential of the two wealthiest democracies in the world.

Nevertheless, some skepticism is refreshing and needed. Regional forces will shape the alliance if it simply wages a rearguard effort. China would like to marginalize the United States and America’s alliances, if not drive wedges in the alliances themselves. China would be happy to Finlandize its neighbors so that all major security issues required Beijing’s blessing.

The U.S.-Japanese alliance needs an offense, not just a defense. The alliance must innovate, using all of its instruments of power, to adapt and leverage its diplomatic, economic and military clout. If we are to have a realistic chance of shaping a rising China while managing complex global issues, we need growing trade and investment (by finishing the Trans-Pacific Partnership). We need to stop blocking China’s infrastructure bank and start investing in our existing development institutions, including the Asian Development Bank.

On defense, we need Japan to follow through on collective self-defense rights and more integrated alliance military bases and forces. We also need resilient, whole-of-government crisis-management systems to tackle everything from natural disasters to cyber attacks to Ebola to terrorism. And we need an ongoing strategic-planning dialogue between our two governments to ensure that the forthcoming Defense Guidelines are implemented in the context of a common strategy moving forward.

To seize the summit diplomacy moment, we must translate our alliance community of interests into a community of effective action. This means transcending the present satisfaction with the U.S.-Japanese security relationship and instead challenging the alliance and leveraging it for the future.

Patrick M. Cronin is Senior Advisor and Senior Director of the Asia-Pacific Security Program at the Center for a New American Security.