The U.S. Military: Proud Owners of One-Third of Syria 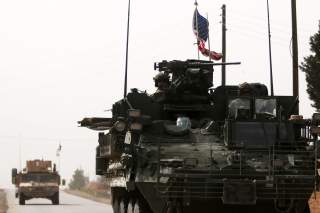 He called it the "Pottery Barn" rule: you break it, you buy it! Former secretary of state Colin Powell was, of course, referring to Iraq back in 2003, warning President George W. Bush about the inherent risks of regime change. “What comes next?” he liked to ask. Though, admittedly, the United States was hardly responsible for most of the “breaking” in Syria—that ignominious honor belongs to Bashar al-Assad—Powell’s question remains relevant today.

Why? Because the risk-reward calculation in Syria is completely unbalanced, with a real danger of regional great power conflict. Just this week, as the U.S. military stares down a slew of adversaries along the Euphrates River, top Russian officials threatened retaliation if President Trump orders attacks on the Syrian regime which endanger Russian servicemen. Even more striking, last month U.S. airstrikes killed scores of assaulting Russian mercenaries. This is all deadly serious.

How many American citizens even realize the U.S. military now occupies most of the eastern third of Syria? There’s been no new congressional authorization of force and scant debate on Capitol Hill. Contrary to effective strategy and sound policy, expansive war and military occupation is the default solution championed by the Washington establishment.

The problem with holding territory in Syria is quite simple: people live there. Real, live folks the U.S. military—like it or not—is now beholden to. These Syrians’ hopes, dreams, sustenance, quality of life, gripes and complaints—at the expense of domestic concerns—become the responsibility of the U.S. government according to local perception. I’ve seen this movie before, experienced it, in both Iraq and Afghanistan. It doesn’t end well.

Furthermore, Washington is being sucked ever further into the Syrian abyss for no strategic benefit to the United States.

Rhetoric aside, many of Trump’s campaign statements were eminently reasonable. But contrary to his clear-eyed observations, his administration is doubling down and staying put in Eastern Syria.

Though policymakers and administration officials refuse to use the word, by mid-January the U.S. military began “quietly nation-building” in parts of Syria. Ambassador to the UN Nikki Haley told the Security Council this week the United States is prepared to act unilaterally in Syria. Leaving aside the fact that U.S. military intervention is unauthorized and rests on shaky legal ground, recommendations to intervene further are decidedly not guided by any realistic appraisal of vital U.S. national security interests—it therefore does not merit further investment of American lives and taxpayer dollars.

Assad is a brutal, authoritarian killer. That said, the United States deals with numerous nefarious regimes (think the Saudis) and has to pick its battles. The only crucial American interest in Syria is the suppression of transnational terrorism. That’s mostly complete and requires little more than a low-level intelligence and counterterror presence in the region. Backing the Kurds, removing Assad, and “countering Iran,” are all laudable goals—but this is do-gooderism masquerading as real strategy.

Here’s the precarious situation on the ground today: Assad has basically defeated the rebels in Western Syria. His Russian and Iranian allies have troops on the ground near the U.S. frontlines. Turkey has invaded north and west of U.S. positions to battle America’s Kurdish partners. Turkey’s President Recep Erdogan (a NATO ally) has even warned the U.S. military to stay out of its path.

Washington has once again ensconced the United States in a veritable imbroglio and with massive risks and costs—but scant reward.

Remember, for a moment, how we got here. ISIS has been a horrific blight on humanity. Still, as recent scholarly work demonstrates, ISIS—even at the height of its power in 2015—was surrounded by enemies and ultimately unsustainable. U.S. intervention undoubtedly hastened the caliphate’s collapse, but ISIS’ inflexibly apocalyptic extremism doomed them from the start. The question was when and by whom. Regional Muslim powers were far more threatened by the caliphate than the distant United States. Plopping American boots-on-the-ground, especially on the Syrian side of the border, was a choice, and, I fear a blunder.

Seventeen years of indecisive wars of choice have demonstrated time and again that when it comes to the intractable Middle East, sometimes the prudent path is to force those on the ground with direct interests at stake to do the heavy lifting and eradicate problems in their backyards.

When you need the best, you send in the U.S. military. But our armed forces should be sent in to protect the United States from direct threats to our interests—not to prevent bad people from killing each other. When the United States is sent in for missions regardless of our interests, the inevitable question returns: “What next??” as Powell would ask. Unfortunately, the American propensity to do something has sucked the U.S. military—again—right into a no-win trap.

The recent past being any guide, the U.S. military will stay put—indefinitely—in deference to the flawed notion that all radical Islamist terrorists pose an equal threat to our homeland and only American infantrymen can deny terrorists “safe havens.”

Predictions are a tricky thing, but here’s one: Within a few years, America will gain nothing, and Washington will come to regret what turned into a messy, prolonged excursion in Syria. Pundits will wonder how it happened though it will have seemed preordained, just another unavoidable foreign policy disaster in an intractable region.

Only it doesn’t have to be so; nothing is inevitable, this disaster is unfolding right now before those with clear eyes. Someday we will wish we’d cut our losses and sensibly redeployed our troops based on sober strategy and U.S. interests rather than reacting to a crisis merely because we can.

Now is the time to set realistic defense priorities and design an effective strategy that delivers for the American people.

Danny Sjursen is a fellow at Defense Priorities. He served combat tours with U.S. Army reconnaissance units in Iraq and Afghanistan and later taught history at his alma mater, West Point. He is the author of a memoir and critical analysis of the Iraq War, Ghostriders of Baghdad: Soldiers, Civilians, and the Myth of the Surge. Follow him on Twitter at @SkepticalVet.