Is the U.S. Military Ready for a War with North Korea? 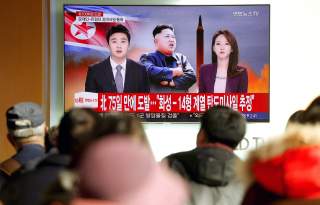 Earlier this month, Senator Lindsey Graham said that if the United States goes to war against North Korea, it would be, “an all-out war against the regime; there is no surgical strike option.” It would be bloody, he conceded, “but don’t ever lose sight of how this war ends… we win it.” Yet is that a safe assumption? Seventeen years of laser-focus on counterinsurgency (COIN) fights and small-scale special operations have left the United States dangerously unprepared for major conventional combat.

If the cost in terms of blood, treasure and international consequences were irrelevant, then it is a certainty that if the United States chose to, it could wipe out North Korea. The price of a war, however, is far from irrelevant. If Washington chose to launch a preventive war to remove North Korea’s nuclear capability and it turned into an all-out regime-changing battle, it is far from certain the United States could win the war at a price the nation could afford.

If the United States had to fight a conventional battle in North Korea or Iran––or take on Chinese or Russian troops elsewhere in Asia or Europe––many believe that the combat victories won since 9/11 would allow our troops to defeat any of them with certainty, even if understanding the casualties would be higher.

However, I can say with certainty that experience gained in one type of combat does not directly result in expertise in another type. Many skills are unique and non-transferable. I fought a major tank battle in Desert Storm as a young lieutenant. I served as a military trainer in Iraq and participated in classic COIN operations in Afghanistan. Yet even after having served early in my career in an armored unit, I saw how challenging it is to switch from COIN back to a conventional mindset through armored training exercises in the mid-2000s.

In 2006, immediately after having served my first combat tour in Afghanistan, I was assigned as the second-in-command of an armored cavalry squadron for the 1st Armored Division in Germany. Shortly after my arrival our unit was sent to conduct a major field training and live fire exercise near the Czech border.

I remained an avid student of maneuver operations and had visited a number of World War II battle sites throughout Europe, yet I was surprised how difficult it was to “reboot” my thinking from the slower pace and smaller scale of COIN operations to the rapid speed and great lethality of tank-on-tank maneuvers.

It is without question that the North Korean military is antiquated and many generations behind American technology in every area. Yet they are not without advantages. In a bad set of circumstances, these advantages could prove decisive even against the far more powerful U.S. military.

First, they would be battling on their home soil and would likely fight fanatically. Secondly, they know the hills, mountains, valleys, rivers and towns like the back of their hands. They would have the ability to dig into mountain sides and put up a ferocious defense that could require months of intensely bloody fighting to dig them out. Thirdly, by all accounts, many North Korean troops are fanatically devoted to the state and would endure excessive casualty rates yet continue fighting, much like the Japanese did against the United States in World War II.

Sen. Graham is right in one sense: if the U.S. government decided it would fight to win a ground war in Korea no matter the cost, we could definitely do it––our vastly superior resources makes it inevitable that North Korea, regardless of how tenaciously they would fight, would eventually be worn down. But he is wrong in the sense that matters the most: can American win a ground war against North Korea today at an affordable cost? The answer is certainly ‘no.’

Pyongyang could exact a price that is so far out of proportion to what we could win that a victory for us would be unaffordable. In a conventional war, they could inflict hundreds of thousands of civilian casualties against South Korea in the initial hours and days of a conflict; upwards of half a million overall. They could fire conventional ballistic missiles at U.S. bases in Japan and Guam, or at civilian targets against our ally Japan, driving the casualty rate even higher.

North Korea can be deterred. Kim Jong-un wants to survive and his desire to live provides us critical leverage. Deterrence is a promise of withering, devastating response if they ever launch a conventional attack the United States or our allies. Such a response, however, would be purely punitive in nature: we would not launch a ground invasion, but a devastating air and missile attack designed to exact a price for their aggression far in excess of their attack.

If Kim ceased attacks, then our response would end. If he chose to continue, the price would escalate, always far beyond his actions. Only if they launched an invasion of their south neighbor would the possibility of U.S. ground action reenter the equation; a nuclear, chemical, or biological strike would be met with an annihilating nuclear response. Bottom line: deterrence is withering punishment out of proportion to any offensive action by North Korea—whether conventional or nuclear.

America is currently in a tense but stable situation vis-à-vis North Korea—unless we turn into a more volatile one by launching a military strike. Decisions by Washington policymakers to execute seventeen years of asymmetric warfare in the Middle East have left our conventional military less prepared for a high-intensity conflict than they should be. We don’t need to choose another war that would devastate the Armed Forces.