The U.S. Military Will Not Solve the Venezuela Crisis 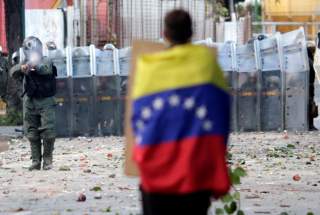 In a recent press conference, President Donald Trump claimed that the United States had a variety of plans for dealing with Venezuela and would not rule out a “military option.” Never ones to miss out on an opportunity, the media’s response was predictably unbalanced. You would have thought the United States was launching an amphibious assault on Venezuela’s coastal Puerto Cabello.

Venezuela’s dictator Nicolas Maduro, naturally, pounced on these comments. Still reeling from President Trump’s refusal to speak with him until he restored Venezuela’s democracy, Maduro denounced the imperialist threats. He pathetically scheduled a two-day joint military and civilian exercise on August 26 and 27.

Maduro should not count on full attendance from his soldiers. Defections among the rank and file members of the military are happening often. Opposition leaders claim there is growing concern within the military about Maduro’s heavy-handed tactics against anti-government protesters. Venezuelan officers have even sought asylum in neighboring Colombia.

Venezuela’s military has not been immune from the country’s food shortages either. While Maduro has lined the pockets of high-ranking party loyalists, not all have been treated equally. Police in neighboring Guyana have recently captured Venezuelan soldiers begging for food.

It logically follows that, as the leader of the U.S.’s national security apparatus, the military could play a role in addressing the Venezuelan crisis. This would likely take place to support humanitarian relief efforts, something the U.S. military and their regional counterparts in Latin America do on a regular basis. From helping out after a flood or an earthquake, a U.S. military option is much more than bullets and bombs.

Just as Fidel Castro taught Maduro how to destroy a country, he also taught him the power of spreading disinformation. Faced with an economy in freefall and approval ratings in the low teens, Maduro has attempted to hype the threat. While playing the fake imperialist Yankee card might have occasionally worked for his predecessor Hugo Chavez, hungry and hopeless Venezuelans know who is really to blame.

Vice President Pence is currently traveling throughout South and Central America to visit friends and partners. In his meetings with heads of state in Argentina, Chile, Colombia and Panama, Venezuela will naturally be a top agenda item. Actions at the Organization of American States (OAS) and the recently issued Declaration of Lima, signed by twelve countries in the region, indicates the vast majority of Latin America is line with the Trump administration’s point of view on Venezuela.

Whereas many countries in Latin America traditionally remained on the fence, countries are taking an exceptionally forward-leaning approach alongside the United States. Venezuela’s descent into a dictatorship and the rapidly deteriorating economic situation has removed indifference as an option for much of Latin America.

Coordination with our regional partners is key to addressing the crisis. Policy makers should develop concrete performance benchmarks for the Maduro regime to meet—steps that must be taken to reduce tensions with its neighbors and the United States.

Alongside our partners in Latin America, we should develop a comprehensive sanctions regime targeting corrupt Venezuelan government officials. Whenever possible, we should urge other countries to reciprocate the sanctions as well.

Never before has the United States had such a powerful and willing regional coalition to address the Venezuela crisis. The Trump administration must be careful to not squander these diplomatic gains. The United States cannot afford to go it alone on Venezuela.

Ana Quintana is a policy analyst in the Heritage Foundation’s Allison Center for Foreign Policy Studies specializing in issues affecting Latin America and the Western Hemisphere.