The U.S. Military's Strength Is Being Wasted on Pointless Wars 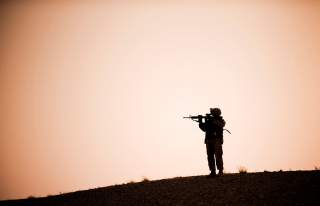 Since its creation in 1775, the purpose of the U.S. Armed Forces has been to defend the nation against all enemies, foreign and domestic. Now, however, the U.S. military, in the vast majority of cases, is deployed not to defend the country, but to execute a long list of tactical tasks which have little, if any, association with securing vital U.S. national interests.

The evidence is clear and overwhelming. Just under two hundred thousand American military personnel are currently deployed in 177 nations around the world. The mission in Afghanistan has largely degenerated into merely keeping the regime in Kabul from falling to insurgents. U.S. military personnel in Syria are supporting various so-called “moderate” Islamic militia and Kurdish Syrian Defense Forces. Meanwhile, across the border in Iraq, American troops are also supporting Iraqi Security Forces for the benefit of the government in Baghdad.

Air power, Marines and special operations troops have been sent to fight in Yemen, Pakistan, Libya, Somalia and other locations in Africa. Yet there are no American vital national interests at risk in any of those conflicts.

Because Afghan Security Forces remain unable to defend their country and the Iraqi Security Forces remain too weak to defend their country after the defeat of the Islamic State in Mosul, administration and military officials are signaling that U.S. forces want to remain in both theaters for the foreseeable future. In not one of the military excursions listed above is there a military strategy with an objective aimed at defeating an enemy. There are no tactical benchmarks whose attainment would herald the successful end of the mission.

Bluntly stated, the purpose of the U.S. military has now become, unequivocally, to engage in permanent combat operations in dozens of countries around the world—none of which enhance America’s national security.

This is an egregious violation of what ought to be the purpose of the Armed Forces, which is to defend the American homeland, protect U.S. citizens abroad and to fight and win America’s wars when all other course of action have been exhausted. This perversion of the military’s purpose is a counterproductive drain on national resources, ensures the perpetuation of a never-ending stream of enemies who will rise to fight against American interests, and perhaps worst of all, routinely requires the blood of U.S. citizens for dubious—or no—benefit to the United States.

I first joined the U.S. Army as a private in 1985 and did so out of a desire to serve the country. Like every other member of our Armed Forces today, I raised my right hand and swore an oath of allegiance to defend the Constitution of the United States. Everyone who volunteers to serve tacitly recognizes that they may one day have to lay their lives down in defense of the country. It is a perversion of their oath and abuse of their loyalty to instead ask them to spill their blood and give their lives for the interests of other governments.

The problem is that while Washington policymakers routinely keep the military employed on missions unrelated to our national interests, those areas that are essential are being neglected.

America does have a stake in ensuring the global commons remain accessible for free and open commerce, and that neither Russia nor China militarily subjugate Europe or Asia. It is critically important that neither Iran nor North Korea obtain or expand nuclear arsenals. We must stop wasting limited U.S. national treasure on missions that don’t support the major interests of the country while putting at risk those areas that do matter.

If the United States continues with the status quo––dissipating its strength on too many missions that rise merely to the level of “interest”––then the country may not be able to prevail when that next major crisis unexpectedly arises. The best way to ensure the U.S. military is trained, ready and able to answer the call for its presence when it is genuinely required is to stop wasting its strength on things that don’t contribute to U.S. security.

Daniel L. Davis is a senior fellow for Defense Priorities and a former lieutenant colonel in the U.S. Army who retired in 2015 after twenty-one years, including four combat deployments. You can follow him at @DanielLDavis1.

Image: A Marine with Lima Company, 3rd Battalion, 3rd Marine Regiment scans the horizon at the start of a nine-hour night patrol in the Helmand province of Afghanistan. Flickr / U.S. Central Command