The U.S. Navy Could Be Facing Its Biggest Challenge Ever: The Anti-Access Dilemma 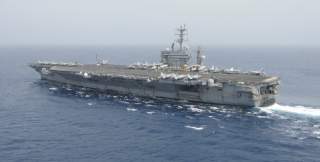 A dreadnought battleship, mistress of the sea, could now suffer catastrophic damage at the hands of a lowly torpedo boat. Dogs and cats took to living together. Corbett should have gotten a load of today’s world, where the long arm of cruisers and the flotilla has gotten longer with such implements as anti-ship cruise missiles and wake-homing torpedoes, and where naval vessels enjoy long-range fire support extending hundreds of miles offshore. Fire support, that is, that outranges U.S. Navy surface combatants by a wide margin.

So rather than rhapsodize about a fantasy fleet, naval leaders must ask themselves candidly: do surface task forces constitute a battle fleet per se, when they can’t survive the fight for command? Or is this a momentary thing? Are the advantages that accrue to anti-access defenders fleeting, correctable in the near term through technological or tactical wizardry?

If not, no dream surface combatant—no aircraft carrier, no guided-missile cruiser, no destroyer—qualifies as a capital ship. No combination of speed, protection and armament may suffice. Built to win command, these high-end vessels may find themselves relegated to support duty, much like cruisers and flotilla vessels policing the seas after the battle fleet triumphed.

The navy, then, must determine how surface forces fit into this brave new world. Corbett’s fellow maritime historian Alfred Thayer Mahan sets forth a rough-and-ready standard to guide the navy’s thinking. He defines capital ships as “the vessels which, by due proportion of defensive and offensive powers, are capable of taking and giving hard knocks” in major fleet actions. They can dish out and absorb heavy punishment in combat against rival fleets—and win.

But Mahan, like Corbett, never saw the fin de siècle torpedo revolution consummated—let alone an age when fleet actions take place under the shadow of shore-based sea power. Modern-day capital ships must boast defensive and offensive powers sufficient not just to beat enemy fleets, but to take on enemy air and missile forces. If exotic technologies such as electromagnetic railguns or directed-energy weapons will restore a fighting edge to the surface navy, well and good.

Otherwise, the naval establishment should figure out how to put legacy platforms to use as support arms. U.S. and allied forces can clear important waters and skies of local defenders, rendering these zones safe for landing troops, unleashing volleys of land-attack cruise missiles, or imposing blockades. Building a fleet, sending it into harm’s way and hoping the threat environment will conform to the present state of technology is asking for trouble. Galactica may perform well in open space, but take a heckuva pounding from planetary defenses—the sci-fi counterpart to anti-access—if she strays too close.

Which leaves one nagging question. If no fleet of ultimate warships can wrest command of the sea from anti-access opponents, then what is today’s equivalent of Mahan’s and Corbett’s battle fleet? What force will win command so the surface navy can exercise it? Well, attack submarines can penetrate anti-access zones with relative impunity. They can assail an opponent’s navy, denying that opponent the use of its own offshore waters. That’s an invaluable function. But subs can do little against shore-based air and missile forces, the overhead axis of sea power.

What should U.S. commanders do about that? The answer may not be a purely naval one, just as the threat is no longer a purely naval one. The “battle fleet” of tomorrow may well be a hybrid sea/air/land force—not a battle fleet at all. Undersea forces complemented by swarms of small, fast-moving patrol craft will deny enemy navies control of vital waters while land-based aircraft and missiles go after shore installations that menace surface forces. A dream team, not a dream ship, may be the answer to America’s anti-access woes.