Is the U.S. Navy Weak? The Chinese Seem to Think So. 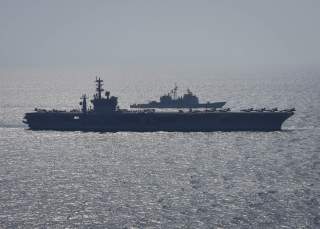 When the USS Fitzgerald, a Burke-class destroyer and part of the U.S. Navy’s Seventh Fleet, was mysteriously struck by a merchant ship outside of Tokyo Harbor in June 2017, seven sailors perished in the tragic navigation collision. The episode was deeply shocking since a whole series of redundant technologies and shipboard procedures should have made that accident impossible. But when a similar episode befell another Seventh Fleet destroyer, the USS McCain, in August, in which ten sailors were lost, it became clear that the U.S. Navy (USN) had entered into a period of rather severe crisis. After mourning our dead, these disasters demand a top-to-bottom reexamination of training techniques, command paradigms, technological integration and operational patterns, at a minimum. This proud and venerated service must, above all, avoid the temptation to find easy answers and scapegoats.

Part of the reckoning, of course, concerns the strategic fallout of these accidents. That must be counted, of course, among allies, but perhaps most importantly with respect to strategic competitors. It will surprise no one to learn that Chinese military commentators, who watch U.S. Navy operations with utmost attention, have formed some preliminary conclusions regarding the meaning of the incidents for the larger geopolitical struggle in the Asia-Pacific.

Two articles (from 25 August and 1 Sept) in the Chinese military newspaper China National Defense [中国国防报] reveal the rather disturbing conclusion that they view the U.S. Navy as comprised of “men [that] are weary, [with] their steeds spent, helmets askew, and armor bent” [人困马乏盔歪甲斜]. With some evident sympathy, the article does note sometimes that “when it rains, it pours …” [祸不单行] There is a recognition that the waters off of Singapore (where the McCain was struck) are among the busiest in the world. But on the other hand, the Chinese analysis observes that U.S. warships have good maneuverability and a U.S. expert is quoted lamenting the failure of on-board sensors. The analysis notes that the two major collisions were also preceded by two additional serious incidents in the Western Pacific earlier in 2017, involving the USS Lake Champlain, and separately the USS Antietam. The Chinese analysis, moreover, demonstrates an understanding that both the McCain and the Fitzgerald are ships that provide unique ballistic missile defense (BMD) capabilities that are not limitless.

These articles do broach a few explanations for the two major collisions. The possibility that hackers penetrated and interfered with the ships’ information systems is discussed briefly, but then it is stated matter-of-factly that the Chief of Naval Operations Admiral John Richardson has declined to embrace that particular theory. A subhead in one of the Chinese articles puts forward some rather blunt hypotheses: “The Result of Excessive Self-confidence and Crudeness?” [过于自信和鲁莽所致] The analysis goes on to assert that the USS McCain incident has “exposed to a significant degree that major problems exist in the US Navy training regimen…” A Fox News statement by an anonymous U.S. Navy official is then quoted, asserting that current USN exercises are not up to past standards. The second analysis also suggests that basic personnel training has been neglected, leading to an overall decline in proficiency of the force. This editorial from 1 September 2017, pulls no punches when it concludes: “… the US Navy finds itself getting into accidents lately against the background of commonly entering other countries’ nearby seas and sensitive waters to undertake so-called patrols with ships in bad condition, personnel physically and spiritually exhausted, and with lax safety knowledge.”

This broader line of attack becomes a major theme of the Chinese analyses. Describing the situation of the U.S. Navy as “awful” [糟], Chinese military analysts highlight in the 25 August article what they perceive to be a “real and structural contradictions.” [现实与结构性矛盾]. It is observed that the U.S. is seeking to maintain a naval presence in eighteen crucial sea areas, but that the necessary force requirement to meet that strategic imperative is at least 300 to 355 ships. Yet, “today there are just 272 ships,” the analysis states. These Chinese military commentators might make a valid criticism in suggesting that the U.S. Navy is genuinely lacking a low cost workhorse [工作驽马] vessel of the light frigate type. According to this analysis, the consistent deployment of Burke-class destroyers is “completely inappropriate” and just contributes to wearing down the ships and creates chances for accidents. At present, the U.S. Navy is viewed as “overloaded.” [超负荷] President Donald Trump’s ambition to expand the U.S. Navy’s “big deck” aircraft carrier strength back to 12 is also noted, and it is explained that he will try to fill the Navy spending gap by squeezing “small money” [小钱], such as the U.S. Coast Guard. Here, the Chinese analysts also forecast further trouble, because they suggest that U.S. shipyards lack smooth processes for providing trained personnel for technological sustainment. [解决技术支持 …人力资源的的培训工作也不轻松]. The main analysis concludes by suggesting that the “Cold War mentality” is the greatest barrier to resolving the above contradictions. The Chinese rendering sees a tool for sea power that is forward deployed everywhere and throughout the whole world. They contend that this will inevitably lead to the result of overstretch.

Such discussions among Chinese strategists are not surprising, but are still disturbing, of course. Undoubtedly, these attitudes could cause Beijing to challenge Washington ever more stridently in the Western Pacific, and could even lead to the grave misperception that the U.S. Navy is a “paper tiger” [纸老虎]. Such a risk must inform our collective urgency to “right the ship.” Still, the issue of a relationship between overstretch and current U.S. strategy cannot be dismissed altogether. After all, strategy is equivalent to choice and ultimately prioritization. Attempting to be strong everywhere at all times indicates a poor grasp of strategy and/or an unwillingness to make tough, but necessary choices.