The U.S. Sanctions Bill Is a Win for Russia 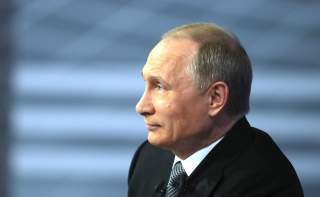 The surprise about the Russian Foreign Ministry’s announcement of Russian sanctions on U.S. diplomats and embassy properties is that they did not come sooner. The usual practice during the Cold War and after was that any diplomatic expulsion on either side was met with a symmetrical response. Indeed, in December, after the Obama administration expelled thirty-five Russian diplomats and closed down two embassy compounds to punish Russia for its interference in the 2016 election, Foreign Minister Lavrov appeared the next day on television brandishing a list of thirty-five American diplomats whom he advised President Putin to expel. But Putin surprised the world by announcing, “While we reserve the right to take reciprocal measures, we’re not going to downgrade ourselves to the level of irresponsible ‘kitchen’ diplomacy.” Clearly the Kremlin believed that once President Trump took office the sanctions would be rescinded and relations would improve, so why not be magnanimous?

Seven months later, and after bilateral presidential meetings in Hamburg that appeared to signal the beginning of the normalization of relations, the prospects for an improved relationship are as dim—if not dimmer—as they were last December. The United States will now have to reduce its diplomatic staff in Russia by 60 percent to comply with the Russian sanctions. The downturn in relations is largely for domestic reasons on both sides. The incessant stream of investigations into ties between the U.S. president’s family and close advisors and different Russian individuals—plus the 2016 election—has made Russia a toxic subject in Washington, DC. In an unusual alliance between congressional Republicans and Democrats, the Senate passed by 98–2 a bill codifying and expanding existing sanctions, which were initially imposed under Obama after the annexation of Crimea by executive order, because they want to remove from Trump the ability to lift these sanctions unilaterally. Congress would now have to approve any modification of the sanctions regime. This kind of legislation is a blunt instrument. Once passed, as the history of the 1974 Jackson-Vanik amendment shows (it remained in place for thirty-eight years), it will probably stay on the books for longer than necessary and remove the flexibility and leverage that a president could have in dealing with Russia.

Domestic factors have also influenced Russia’s response. Russian nationalism has become a potent force. Putin faces re-election in March and, while his popularity remains high, his appeal rests largely on his foreign-policy accomplishments, showing that Russia is a respected world power and that he is a strong leader. The initial euphoria in some Russian circles that under Trump the Kremlin and the White House would enter into a new, friendly, pragmatic relationship, has evaporated. Putin may feel that he has to demonstrate that Russia cannot continue to respond passively to perceived insults from the United States. The irony, of course, is that Russia has brought this upon itself through its actions in Ukraine and during the U.S. election campaign.

The U.S. sanctions bill, designed to hurt Russia, may have unintended consequences for the United States. As currently written, it will not only continue to penalize Russia but will also penalize American and European businesses because of its restrictions on energy projects that involve Russian companies. Specifically, the bill seeks to prevent the construction of the Nord Stream Two gas pipeline that would export Russian gas under the Baltic Sea to Europe. Germany supports the pipeline as the most cost-effective way to meet future gas demand, as do most—but certainly not all—of its EU partners. Jean-Claude Juncker, president of the European Commission, has warned that the sanction bill “could have unintended unilateral effects that impact the EU's energy security interests.” He added that “if our concerns are not taken into account sufficiently, we stand ready to act appropriately within a matter of days.” Moreover, German officials—echoed by Russians—have suggested that real agenda behind the sanctions is to boost U.S. natural gas exports to Europe. Some EU officials have warned that the EU may rethink its own sanctions regime—carefully designed with the Obama administration—if the United States moves forward with the bill. This, of course, would be good news for the Kremlin.

The latest Kremlin actions may herald the beginning of a new series of sanctions and counter-sanctions by both sides. Russia and America may still be able to work together in Syria, but that may be one of the few remaining areas of cooperation. If so, the U.S-Russian relationship could continue to deteriorate before it starts to improve—and with the current Washington dysphoria, that could take a long time.