The U.S.-South Korea Alliance Should Be Reformed 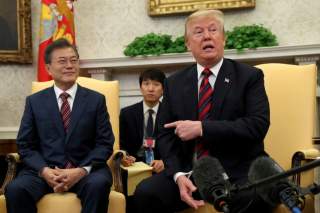 Near the end of the essay, Taffer does suggest that he is open to some U.S. troop reductions on the Korean Peninsula, as long as it is an “allied decision” and not directly part of a bargain with North Korea on denuclearization. Here, we may be able to find some middle ground in our diverging perspectives perhaps. I certainly recognize that American Presidents need to look tough—for domestic audiences primarily—and such a trade might not be politically palatable. This is also particularly possible as Trump’s “peace policy” toward North Korea has critics on both the left and the right. Such indirect compromises have been used before, of course, notably Kennedy’s quiet and wise offer to withdraw missiles in Turkey during the Cuban Missile Crisis. Again, my counsel is emphatically not to dissolve the U.S.-ROK alliance, but rather to quietly offer to close some bases and draw down the numbers to below five thousand personnel. Such reductions could occur in three to four stages to complement stages of North Korea’s CVID nuclear disarmament. However, these stages need not be formally or publicly linked as one trade for another in a written agreement. As military strategists know well, the U.S. air and naval components need not be generally impacted by these minor and highly symbolic withdrawals. After all, it is air and naval forces that are the heart of U.S. military power in Northeast Asia and will remain available for any contingencies.

A window has opened to try to achieve a lasting peace in Northeast Asia, and it may close precipitously—perhaps sadly under the heavy weight of U.S. domestic critics. The excessive paranoia of the anti-China variety should not inhibit the flexibility of American leaders. For the sake of hundreds of millions of people in Northeast Asia now living under the daily threat of nuclear apocalypse, U.S. leaders should swing for the fences throughout negotiations by meeting Pyongyang halfway to achieve a new, stable, and more peaceful status quo. The strongest country on earth can indeed take some small risks for peace.

Lyle J. Goldstein is Professor of Strategy in the China Maritime Studies Institute (CMSI) at the United States Naval War College in Newport RI. You can reach him at [email protected]. The opinions in his columns are entirely his own and do not reflect the official assessments of the U.S. Navy or any other agency of the U.S. Government.