Is the U.S.-South Korea Alliance in Trouble? 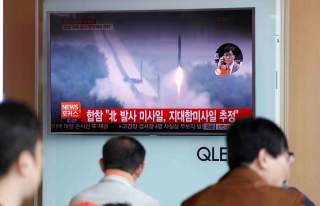 Following a decade of convergence between South Korean conservatives and the Obama administration, American analysts have been bracing for a new round of alliance-shuddering tensions under Donald Trump and Moon Jae-in similar to those that existed a little over a decade ago during the George W. Bush and Roh Moo-hyun administrations. But this analysis overlooks constraints Moon faces that are likely to keep him on track; instead, South Koreans are holding their breath over the possibility that the greatest risks to the U.S.-ROK alliance could come from uncertainties generated by President Trump himself.

Moon served as Roh’s chief-of-staff and his campaign borrowed directly from the Roh administration’s playbook. Moon’s decision to temporarily halt implementation of the deployment of the Terminal High Altitude Area Defense (THAAD) U.S. missile defense system due to procedural concerns about transparency and domestic environmental standards have reminded Americans of the prickly challenges that beset alliance relations between Washington and Seoul a decade ago.

But Moon Jae-in faces a dramatically different domestic and international situation as president compared to the one he experienced as chief-of-staff in the Roh Moo-hyun administration. Domestically, Moon leads a government that holds a minority of seats in South Korea’s National Assembly and South Korean public support for the U.S.-ROK alliance (as well as the deployment of the THAAD missile defense system) is high. Moon’s electoral mandate revolves primarily around the need to root out domestic corruption and address economic inequality; to do so, he must pursue a pragmatic and responsible foreign policy, the centerpiece of which will be the security alliance with the United States.

Second, North Korea under Kim Jong-un is different from the North Korea that his father Kim Jong-il led a decade ago. Despite Moon’s stated desire during the campaign to cultivate dialogue and renew economic relations with Pyongyang, North Korean missile tests—conducted only four days after Moon’s election—served as a wake-up call. North Korea long ago abandoned denuclearization negotiations and has rebuffed early Moon administration efforts to reopen nongovernmental exchanges. North Korea under Kim Jong-un has appointed military leaders focused on subversion to handle relations with South Korea and has shown little interest in dialogue.

Third, the international context is different. Moon’s proposed revitalization of inter-Korean economic engagement will run counter to the Trump administration’s pressure campaign and likely violate UN sanctions on North Korea unless Pyongyang returns to denuclearization. Additionally, Moon administration efforts to improve relations with China have been stymied by increasing pressure from Beijing to undermine the United States and abandon the THAAD deployment.

Given the constraints and risks South Korea faces in the current international environment, Moon is wisely tacking toward pragmatism and alignment with the United States. In advance of his visit to Washington, Moon has visibly moved to minimize potential differences with the Trump administration in interviews with American media outlets. He has argued that his ideas for diplomacy with North Korea are consistent with Trump’s policy toward Pyongyang of “maximum pressure and engagement.” Moon noted that President Trump himself offered to have a hamburger with Kim Jong-un during his campaign.

While emphasizing a willingness to go along with the U.S.-led sanctions and pressure campaign, Moon has downplayed resumption of inter-Korean economic cooperation efforts such as the possible reopening of the Kaesong Industrial Complex. He has conditioned such efforts on evidence of North Korea’s commitment to denuclearization. Moon expressed his outrage at North Korea’s responsibility for the death of American college student Otto Warmbier and called Kim Jong-un “an unreasonable leader and a very dangerous person” in a June 20 interview with the Washington Post. Moon’s pragmatic style thus far is a stark contrast to that of his populist political mentor Roh Moo-hyun.

But Moon’s decision on THAAD has reportedly angered President Trump, despite his administration’s assurances that the environmental review will not result in a reversal of South Korea’s decision to accept the missile defense system. Likewise, Trump’s longstanding personal perceptions of South Korean defense and trade free-riding could come to the surface at any time, despite Moon’s pledges to strengthen South Korea’s defense and his country’s substantial financial contributions to the construction of a new base for U.S. forces south of Seoul. The two countries are set to negotiate South Korea’s future share of financial contributions in support of U.S. Forces in Korea later this year, and it is entirely reasonable to expect trade negotiators to review the U.S.-Korea Free Trade Agreement as well.

South Korea’s greatest fear is that bad chemistry between Moon and Trump will erode the assurances on which South Korea’s security is based. These worries are likely to persist, despite deep institutional ties within the alliance, a deeply shared common purpose in countering growing peninsular and regional instability, and strong public support for the security alliance in both countries.

Scott Snyder is Senior Fellow for Korea Studies at the Council on Foreign Relations. He is the author of the forthcoming book, South Korea at the Crossroads: Autonomy and Alliance in an Era of Rival Powers (Columbia University Press, 2018).

Image: People watch a TV broadcast of a news report on North Korea firing what appeared to be several land-to-ship missiles off its east coast, at a railway station in Seoul, South Korea, June 8, 2017. REUTERS/Kim Hong-Ji ​