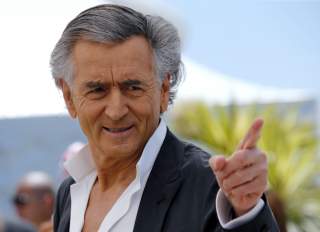 The author of The Genius of Judaism is Goldilocks, and the servings of matzah-ball soup are not up to snuff. He does intimate the existence of a dialectical “third bowl”: “a true Jewish messianism both ambitious and modest, aspiring to the infinite but respectful of the laws of this world and choosing, ultimately, tikkun over apocalypse.” Really, given its inimitability, it’s one that only his refined palate can appreciate.

PERHAPS THE most surreal moment is Lévy’s confession on page 208 of his 230-page work: “I can barely read Hebrew. I do not say daily prayers. I do not follow the dietary laws. I am, moreover, a lay Jew who seldom visits synagogues and has not devoted so much time or energy to study.” Excusez-moi? (This comes after Lévy, who I would hazard does not possess a mastery of classical Arabic either, has authoritatively pronounced that Islam is divided between “throat-slitters” and the “enlightened,” that Islam needs “a Muslim Talmud,” and that fanatical imams are “the exception,” not “the rule.”)

Alas, eclipsed earlier in the book are novel insights into Judaism’s myriad contributions to French culture and Western civilization, as well as incisive reflections on anti-Semitism, namely its evolution and one of its most arresting contemporary expressions: the demonization of Israel. Lévy’s inadvertent accomplishment is to furnish an illustration of the shallowness of today’s mode of mainstream Judaism. To warrant his beliefs, Lévy, like many other secular Jews, readily cites the concept of “seventy faces of Torah.” “That the Torah has faces means, first,” he affirms, “that the act of reading it brings it to life and that the reader animates it by making it his own.” Yet a person must at some point actually read it. He urges “difficult Judaism” and Talmud study, “a practice that some would you believe is the invisible church of ultraorthodoxy.” Alas, hardly any nonobservant Jews are able to even name one tractate of Talmud. Instead of learning Hebrew to understand prayers, mainstream Jews switch from Conservative synagogues to Reform temples and from Reform temples to, well, nothing. If they remain within the fold at all, they almost have to accept at face value the word of their rabbis. If they instinctively disagreed with it, they wouldn’t have the faintest idea where to begin to look within Torah. That we live in an age of instant gratification has only made matters worse. Even the creator of the universe must be rendered all-accessible, all-comforting, all-compassionate—and fit for “Jewish yoga.”

In the end, Lévy loves the greater world too much to break from it. The cosmopolitan life has offered him too much. He’s jealously proud to have befriended Bangladeshis, seen a future in the Jonahs of Angola and sided with the Muslims during the Bosnian War. Unlike first-generation neoconservatives, he is a liberal thrilled by the very prospect of being mugged by reality. In the epilogue, he coyly suggests that he wishes “to go further, to push beyond the bounds of this book and leave for good the path of arrogant men.” If he were serious, he could have started with the wisdom of a king rather than a prophet. “All is vanity,” Solomon recalled. Lévy might have even saved himself the time and effort of rehashing modern Judaism, for the humbled son of David also advised, “there is nothing new under the sun.”

Jonathan Bronitsky is a Washington, DC–based historian and political commentator.

This essay was published in the July/August 2017 print magazine under the headline “The Vanity of BHL.”

Image: Director Bernard-Henri Levy pose during a photocall for the film "Peshmerga" out of competition at the 69th Cannes Film Festival in Cannes, France, May 20, 2016. REUTERS/Jean-Paul Pelissier