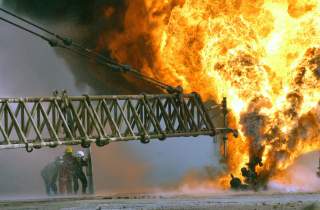 While geopolitical events impact these broader developments and shape how they grow and change over time, rarely do they alter the underlying fundamentals. Apart from a few volatility spikes, the war raging for the last three years in northern Iraq has done little to affect the downward trend in oil prices. Iraqi crude has simply been replaced by other, safer options.

The same could be said for Libya, where production plummeted following the ouster of President Muammar el-Qaddafi in 2011. Recently, the struggle over which of the country’s feuding factions can control its oil fields and export facilities has acted as a lever on prices, which have gone up every time a Libyan outage is reported. But these are small changes, further signs of the market’s inherent volatility.

While geopolitical volatility doesn’t necessarily impact price, the inverse is a different story:  changes in price can have major geopolitical repercussions. The prolonged period of low prices has forced a credit crunch on the Persian Gulf oil producers, has led to economic instability in Venezuela and resurgent violence in Nigeria, and has placed more pressure on exporters like Russia, which is still mired by trade imbalances and a weak currency. The price can rise and fall independently of changes in geopolitics, but volatility in global energy is itself a source of geopolitical instability: it’s much harder for petro-states to depend on oil revenues when they can’t be sure prices will cooperate.

In the past, risk measurably increased when things got more tense in or near the oil fields of the Middle East. Today, the world’s energy supply and consumption patterns have grown much more complex.  That uncertainty may only create greater instability, particularly when political leaders are just as glued to the television as the general public. The result is an increase in crude volatility, as Robert McNally’s new book explains in some detail. Prices may go up when missiles start flying or a diplomatic spat breaks out, but then again, they may not.

Changes in global energy have made it much harder to predict in the long term how Middle East tensions, and even new American military interventions in the region, will affect the world’s access to reliable energy. This uncertainty and volatility must be taken into account when future policies in the Middle East are considered.

Gregory Brew is a PhD candidate at Georgetown University, where he studies the relationship between the geopolitics of energy, U.S. foreign policy and Middle East politics. He writes on energy and politics for OilPrice.com and his work has appeared in Fortune, Huffington Post, U.S. News & World Report and The Conversation.