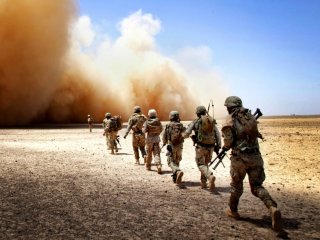 Somewhat to my surprise, the decision to go to war in Iraq in 2002 has been a major issue in this year’s race for the White House.

Sen. Bernie Sanders has questioned the judgment of Sec. Hillary Clinton for voting for the war when she was in the Senate.

Donald Trump has used his early opposition to the war as a selling point in his quest for the Republican nomination.

I am now the only Republican remaining in Congress of the six in the House who voted against going to war in Iraq.

It has been both fascinating and surprising to me that what was certainly the most unpopular vote I ever cast has very slowly become possibly the most popular.

The night before that 2002 vote I was told of a poll in my district that showed 74 percent of my constituents supported the war, with 17 percent undecided. Only 9 percent opposed the war.

I had voted for the first Gulf War in 1991 after attending briefings by Gen. Colin Powell, Gen. Norman Schwarzkopf and other high-ranking officials that made Saddam Hussein sound like the Second Coming of Hitler.

I then watched Hussein’s so-called “elite” troops surrender to CNN camera crews and empty tanks. I realized then that the threat had been greatly exaggerated.

Just before the second Iraq War vote, I read everything I possibly could on the situation. Fortune Magazine had an article entitled “We Win—What Then?” and said another war in Iraq would make American soldiers “sitting ducks for Islamic terrorists.”

U.S. News and World Report ran a headline asking “Why the Rush to War?” We had many leaders who were simply too eager to go to war.

When the Bush administration learned I was leaning against the war, I was summoned to the White House and put in a small security room with National Security Advisor Condoleezza Rice and CIA Director George Tenet.

I asked about Lawrence Lindsey’s estimate that a war with Iraq would cost us $200 billion. The president’s main economic adviser had furnished that figure on the front-page of the Washington Post that day, or possibly a few earlier.

Dr. Rice responded, “Oh no—the war would cost no more than $50 or $60 billion” and assured me we would get some of that back from our allies. Now we know that this war has cost us upwards of $3 trillion.

I asked at that meeting if, notwithstanding the traditional conservative positions of being opposed to massive foreign aid, huge deficit spending and requiring U.S. taxpayers to foot almost the entire bill for enforcing UN resolutions on Iraq, did they have any evidence of an eminent threat.

They did not have any such evidence. Mr. Tenet confirmed as much in his first speech at Georgetown University the day after he resigned.

In Evan Thomas’s book Ike’s Bluff, he wrote that President Eisenhower “would periodically sigh to Andy Goodpaster [his chief of staff], ‘God help the Nation when it has a President who doesn’t know as much about the military as I do.’”

Eisenhower did not have to prove he was a great military leader, so he was not eager to go to war.

In more recent years we have had too many top leaders who apparently want to be modern-day Winston Churchills.

They seem to feel more powerful and important when leading a war. What we really need are more leaders who are satisfied simply giving us peace and prosperity.