The War Over the "Boisto" Ukraine Peace Proposal 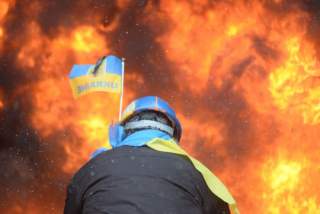 In late June, a group of six Americans consisting of academics and former officials met with seven Russian counterparts on Boisto Island, Finland, to discuss the state of U.S.-Russian relations in the wake of the Ukraine crisis.  I was among the American participants.

Though hosted by the Finnish government, the meeting was unofficial: none of us was speaking for our governments.  Certainly, the U.S. participants were not encouraged to participate in the meeting—or asked not to—by Washington.

The session was, in short, a conclave among experts, acting in their private capacities, to discuss an important international issue.  To use the favored jargon, it was a “Track II” event.  The latter is rather different from hatching plans to decide countries’ fate.

Draft proposals emerged from the Finland meeting.  They were meant to spur discussion on the terms for a ceasefire, in the first instance, and for a follow-on settlement of the conflict in Ukraine, which was deepening by the day.  The preliminary ideas were discussed further in extensive email exchanges.  The culmination was a document—I’ll refer to it here, for convenience, as “Boisto,” with apologies to that bucolic island’s few denizens—agreed to by all participants.

The Atlantic published Boisto on August 26th with a preface written by one of the magazine’s editors, Uri Friedman, to provide context and background.  On September 1, the same site ran a response, which was critical of Boisto on both procedural and substantive grounds.  Eighty-eight people signed this riposte.  Our hope for stimulating a discussion had been realized—and then some.

In what follows I respond to Boisto’s critics.  I have consulted my American colleagues while gathering my thoughts, but I speak solely for myself, not for them.

Among Boisto’s critics (another term I’ll use as shorthand) are several individuals who have been my long-time friends.  Others are acquaintances with whom I have worked or interacted over the past thirty-plus years.  Still others are scholars and former officials whom I have not met but know to be serious individuals with considerable knowledge of, and experience in, Russia and Ukraine.

Together, they have raised important questions about Boisto, and that is all to the good.  While I disagree with their conclusions and found their tone overwrought in places, they deserve a considered reply. Though they observe that the exclusion of Ukrainians from the Finland discussions “disqualifies this initiative [Boisto] from any serious consideration” they then proceed to give it consideration that is very serious indeed; for that at least I am grateful.

Let me begin with the point about the lack of Ukrainian participation, which I take to be the critics’ main theme and the source of their greatest distress.

The proposition that a country can be discussed only if its representatives are also present is itself open to question.  The reality is that the practice of a given pair of governments meeting to discuss issues—even sensitive ones—pertaining to third parties that are not present is routine and unremarkable.

The United States meets with its allies and friends bilaterally to discuss Iran, North Korea, Syria, and China, to give but a few examples.  What Washington does other governments do routinely.

This is at least as common, if not more so, in Track-II sessions, which is what the Finland meeting was.  It was in no sense an official undertaking.

The vast majority of the critics are themselves Americans; Ukrainians among them are few.  Should the Americans be taken to task for issuing a statement about Ukraine—even if written in response to another—that scarcely involved Ukrainian participation?  Should it be said that they have no right to represent Ukrainians’ views?  Surely not.  That was not their intent.  But nor was it ours.

One critic—Professor Alexander Motyl of Rutgers, a respected scholar of contemporary Ukraine—has since published a piece on the Foreign Affairs website advocating that Ukraine relinquish the Donbas to Russia.  He argues that retaining it is more trouble than it’s worth because the territory merely gives Russia a constant means for meddling in Ukraine’s affairs and destabilizing the country.  Should Alex be castigated for daring to propose this idea—which, incidentally, makes Boisto seem like thin gruel—because he, an American, has no right to do so?  Surely not.

Whatever one thinks of his idea, one must respect his right to voice it, eschew objections laced with innuendo and ad hominem characterizations, admire his courage for offering a proposal that’s bound to be controversial, even anger-inducing, and address his arguments.  That is in the spirit of proper public debate.

The critics amplify their theme on Ukraine’s exclusion by conjuring the specter of backroom deals in which great powers decide weaker nations’ fate through the retrograde practice of fashioning a “condominium.”  This point, while dramatic, also misses the mark.

Those of us who met in Finland were not deciding the fate of any country nor acting on behalf of any great (or super) power.  We did not succumb to such grandiosity and certainly had no illusions about the extent of our influence.

Our hope, rather, was to generate proposals that would be released for public discussion and improved upon in consequence—and at a time when U.S.-Russian negotiations had all but broken down.   Our assumption from the outset was that any viable plan would require wide-ranging discussion and could only be hammered out and fashioned in final form by the officials of the governments concerned, Ukraine’s first and foremost.

Thus, though we proposed issues for a dialog between the U.S. and Russia, our document specified that any such talks “should be part of a larger discussion that must include Ukrainian as well as European representatives.”  This applies to every item on the Boisto list.

We had no expectation that a list of proposals devised by a small group with no official standing would be accepted wholesale by Moscow and Washington and then foisted upon the Ukrainian authorities.  That would have been delusional.  And it was certainly no part of our agenda to produce such a plan.

Instead, we assumed from the start that any of our ideas found worthy of further consideration would be debated extensively and modified in light of rapidly changing circumstances—with the Ukrainian and Russian governments, and other countries and organizations engaged in diplomatic efforts to create a durable and just peace, taking part.

In short, the specter of smoke-filled rooms and secret plans to decide the Ukrainians’ fate behind their backs and over their heads is a straw man.

Another arrow in the critics quiver is moral equivalence.  They object that Boisto accords equivalent ethical standing to Ukraine and Russia and find this unacceptable—indeed deserving of condemnation—because Russia is the aggressor.

One cannot achieve solutions to hard problems, which by their nature require tough compromises, by castigating the government of interlocutors and insisting that they admit its culpability.  That might be emotionally satisfying, but it will offer nothing save catharsis.  This should be apparent to the critics, who include seasoned diplomats, former ambassadors and senior State Department officials among them.

In recent days, Ukraine’s president, Petro Poroshenko, has held discussions with President Vladimir Putin, and more may be in store.  Will they make any headway if each demands that the other first admit full responsibility for causing the crisis?

Another point that Boisto’s critics object to is our reference to respecting Ukraine’s “non-bloc status.”  This has been interpreted, erroneously, as code for “Ukraine must forever renounce NATO membership.”

Yet an important qualifier follows this provision in Boisto: “as stipulated by Ukrainian legislation.”  The underlying intent is that Ukraine should decide its status according to its laws, which, as a practical matter, are subject to change.

The American side in Finland included individuals holding very different views on NATO enlargement generally and Ukraine’s prospective membership in the alliance specifically.  No formulation designed, even implicitly, to predetermine Ukraine’s choice of allies would therefore have gained consensus.  This accounts for the admittedly ungainly choice of words.

The critics aver that the wording on this point “gives the impression of rewarding the Putin regime for its outrageous actions.”  If so, that is a false impression.  They also find this intent “wholly unacceptable.”  On this much we can agree.

A September 3 New York Times piece by Peter Baker and Steven Erlanger also conflates “non-bloc status as stipulated by Ukrainian legislation” with Ukraine’s renunciation of NATO.  Boisto intended no such thing, even though the reporters’ interpretation is understandable given our phraseology.

Our critics seek several outcomes: among them, the end of Russian aggression and the withdrawal of Russian military forces from Ukraine.

These are worthy goals.  But the means proposed to achieve them are additional sanctions on Russia and support (including arms) to Ukraine.

The first has had no effect; indeed Moscow has stepped up its military intervention.  Economic punishment may work in the long run, but time is an unaffordable luxury in this crisis given the recent military advances by Russia and the insurgents it backs.

The second—arming Ukraine—could embroil the United States deeper in this conflict.  Those who favor it must specify what their next move will be should the initial one prove ineffective.  Would they go beyond fighting to the last Ukrainian and contemplate intervention, even though the US and its allies have ruled out a military clash with Russia in behalf of Ukraine, and despite the utter lack of public support in America or Europe for taking this step?