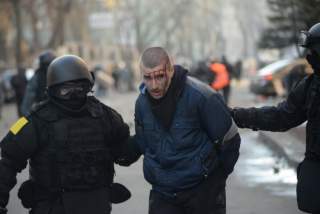 As if more evidence were needed that pronouncements by Fred Hiatt’s Washington Post editorial page with regard to Russia and Ukraine ought to be treated with extreme skepticism, if not outright ignored, last Friday’s offering, which calls for the United States to enact unilateral sanctions on Russia should suffice.

Let us start at the beginning. The Post contends that Kiev’s Orwellian-sounding “antiterrorist operation” has thus far succeeded because President Poroshenko “is resisting pressure to make unacceptable concessions to Moscow and its surrogates.” Not so much. Poroshenko is “succeeding” largely because Russia has, for the most part, acted with a fair amount of restraint in the face of what amounts to an ethnic-cleaning operation being waged by the Ukrainian government against the Russophone east.

This “success” which amounts to the shelling of civilians: unarmed men and women, children and elderly alike, has resulted in a humanitarian crisis that is rarely reported on. According to the UN High Commissioner for Refugees, over 110,000 Ukrainians have fled to Russia so far this year, and 54,000 have been displaced within Ukraine. It should be noted that State Department spokesperson Marie Harf breezily dismissed these figures, treating ethnically Russian Ukrainians as they have been throughout the crisis: as untermenschen.

The Post then goes on to contend that Vladimir Putin “hopes to create another of the ‘frozen conflicts’ Moscow uses to permanently destabilize its neighbors.” This is a common neoconservative talking point that collapses upon the minutest scrutiny. Which frozen conflicts? Is keeping the status of, say, Nagorno-Karabakh or Transnistria unresolved really part of Putin’s grand neoimperial strategy? The ambiguous statuses of the Georgian territories South Ossetia and Abkhazia could be seen as two such “frozen conflicts”, but post-Saakashvili Georgia cannot fairly be characterized as unstable.

Readers are subsequently informed that “it remains to be seen whether Ukrainian forces can finish off the insurgents while observing a pledge to avoid civilian casualties…” I’m afraid that that does not actually remain to be seen. According to the UN assistant secretary general for human rights, 423 people have been killed in east Ukraine clashes since April. And note the sanguinary language here: finish off. This is yet another example of Washington’s tendency to treat armed conflict with alarming flippancy.

The editorial ends with a call for the United States to impose unilateral sanctions of Russia, claiming “…the United States has the power to impose crippling sanctions on Russia, especially through the banking system. If the Ukrainian government can act without the permission of France and Germany, so can the United States.” A couple of points: first, there is no evidence that sanctions have or will have any effect on Russia’s behavior; to the contrary, we need only examine what happened in the aftermath of the imposition of the Magnitsky List to see that provocations of this sort only lead Russia to reply in kind.

In fact, as Daniel Larison has noted, “It’s almost as if Western punishments are useful to Moscow, because they provide something for it to ignore and/or defy.” The editorial’s premise is also flawed. The Post seems to believe that it’s within the administration’s power to enact a sufficiently punishing sanctions regime, which once enacted, will move the Russians to call off their support for the rebels. But it is far from clear the administration actually has that power and even more unclear whether the Russian government has the ability to call the rebels off. Influence? Sure. Complete command? Unlikely.

Further, the Post seems to be willingly oblivious to the fact that Vladimir Putin is coming under increasing pressure from his right flank to act. Hiatt and Co. envision a Russian autocracy that exists in their imagination—one where Mr. Putin is the one and only “decider” who can afford to pay no mind to the politics that surround him.

In the end, what this piece amounts to is a demand by the Post for the United States to engage in economic warfare against Russia, all the while glorying in the actual warfare being waged by Kiev against both armed rebels and unarmed civilians. Could it be the Post wants its new Cold War to turn hot?