The Washington Post Is in Full McCarthyist Attack Mode 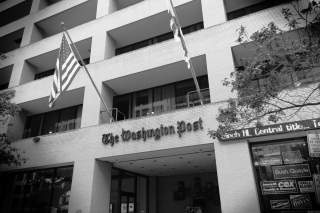 What is the convention regarding connections between a foreign government and a candidate for public office?

It was in full McCarthyist attack mode last Friday when it reported the Russian deputy foreign minister Sergei Ryabkov as acknowledging that the Russian government had established a relationship with Trump’s campaign (or more correctly had sought to establish connections with both candidates but only Trump’s campaign was interested).

Writing ominously about a “disclosure that could reopen scrutiny of the Kremlin’s role in the president-elect’s bitter race against Hillary Clinton,” the Post seized upon Ryabkov’s admission in an Interfax interview that “there were contacts” between Russian officials and members of the Trump campaign.

“Obviously, we know most of the people from his entourage,” the Post quotes him as saying, “We have just begun to consider ways of building dialogue with the future Donald Trump administration and channels we will be using for those purposes.’

To the Post, the existence of such contacts seems to signify that Putin has taken over the White House.

The Post poured scorn on the suggestion by Russian Foreign Ministry spokeswoman Natalia Zakharova that meetings between “staffers at the Russian embassy in Washington” and “members of Trump’s campaign” should be described as “normal practice” (the inverted commas leaving the reader with little doubt as to what the Post thought of the claim).

Zakharova also said that the Russian embassy had in fact sought to establish meetings with both presidential candidates but that “Democratic presidential nominee Hillary Clinton’s campaign refused similar requests for meetings.”

The Post countered with the results of its own enquiries, reporting that “a Clinton campaign official who was asked to comment on Zakharova’s statement answered with a one-word email: ‘false.’”

Nor was the Post deterred by the banal reply of a third quoted Russian official: “Asked later for clarification, a Foreign Ministry official declined to elaborate on Ryabkov’s remarks but said standard diplomacy called for ‘contact with the leaders in the campaign’ on matters such as clarifying statements by the candidate or conveying interview requests from Russian journalists.” The Post gravely noted that the statement had been made “on the condition of anonymity because of the sensitivity of the matter.”

Though it’s not clear how sensitive fact-checking or interview requests can actually be, the Post report effectively suggests that Russian conduct during the presidential campaign was unique, sinister and subversive of democracy.

The same day, on the other side of the Atlantic, there was much gnashing of teeth regarding the “special relationship” when it became clear in London that Trump had telephoned nine other foreign leaders, including the prime minister of Ireland, ahead of British Prime Minister Theresa May.

This prompted The Telegraph to wonder aloud why the British Embassy in Washington DC had failed to establish a relationship with Trump’s campaign, singling out Sir Kim Darroch, British Ambassador to the United States, for “not [doing] enough to develop close links with Mr Trump’s campaign in the build-up to the presidential election.”

Indeed, The Telegraph reported that when British Foreign Secretary Boris Johnson was appointed to office in July he had had to instruct British officials “to do more to forge links with Mr Trump’s campaign, fearing that there was too much expectation in the Foreign Office of a victory for Hillary Clinton.”

What’s more, there is precedent.

“It must be more difficult to get alongside Donald than it was for me to get alongside George W [Bush] or my predecessor to get alongside Bill Clinton,” The Telegraph quoted Sir Christopher Meyer, British ambassador in Washington from 1997 to 2003, as saying, in reference to the unclear role of the “family” in the Trump campaign.

All of which leaves the question unresolved: What is the diplomatic protocol for engaging with a private citizen who is not yet president but might be?

The confidence a presidential candidate might invite the officials of a foreign embassy into would reasonably vary depending on whether the government they represent is that of a longstanding and very close ally or of a sanctioned strategic competitor.

But the fact of the contacts and the holding of meetings would appear uncontroversial – and even, from the point of view of both parties, prudent. The British government is now finding this out and may have to resort to the good offices of Nigel Farage to plug the hole in its intelligence.

This seems a case of slanted journalistic practices as much as routine diplomatic ones.

Who is being tricky here – the Post, Hillary Clinton or the Russians?

Matthew Dal Santo is a Danish Research Council post-doctoral fellow at the Saxo Institute, University of Copenhagen. Follow him on Twitter at @MatthewDalSant1.