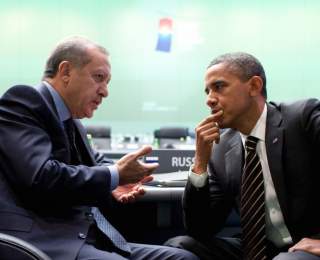 Last month the world was riveted by the attempted military coup in Turkey, followed by President Erdoğan exploiting the situation in the country to further solidify his own grip on power. This autocrat has had a whopping seventy thousand people detained, fired or suspended. Aside from military personnel and police, this number includes thousands of teachers, deans, journalists and judges. The speed at which these individuals were rounded up has left many questioning when the lists of detainees were actually complied.

The mass arrests of alleged putschists (read: political opposition) compelled Secretary of State John Kerry to remind Turkey that NATO expects the government to respect its own democratic institutions. Unfortunately, Kerry’s message comes far too late. The truth is that Turkey has used its NATO membership to make a mockery of democracy for decades. NATO has been an enabler, allowing Turkey to run amok in the region, and, indeed, fuels Turkey’s delusions of reviving the Ottoman Empire.

At the risk of continuing to ruin our international reputation, and after years of making excuses for our former ally, the time has come to end this one-sided and destructive relationship. Joining NATO offered Turkey a guarantee of national security that benefited Turkey far more than it benefited us in the West. This is truer today than ever before.

Under the protection of NATO, the increasingly Islamized nation has joined the ranks of Saudi Arabia and Iran in relying on proxy terrorist groups to advance its foreign policy. Since the breakup of the Soviet Union, Turkey has pushed into overdrive its own self-interest at the expense of the military union, becoming the tail that attempts to wag the dog, often achieving remarkable success.

Under NATO’s umbrella, Turkey has made its southern border all but nonexistent, allowing the free flow of weapons, militants and mercenaries into Syria and the Middle East with no regard for the consequences. This irresponsible policy helped create the breeding grounds for ISIS and the Al Qaeda offshoot Jabhat al-Nusra—both groups Turkey should regret supporting because of the wave of terror attacks the country experienced this past year, culminating in the bombing of Ataturk International Airport in late June.

The extent to which Turkey went to support ISIS was highlighted as early as 2014, when the Turkish military blocked support for the Syrian Kurds as they battled members of the so-called Islamic State in the town of Kobani. The Turkish military actively blocks the Kurds, our main allies on the ground, from fighting ISIS, and as former members of Islamic State have revealed, the Republic of Turkey allows for the unrestricted flow of jihadists to continue to fight the Kurds instead.

After aiding and nursing ISIS into prominence, the Turkish government decided to capitalize on their geographic lottery as it had when it joined NATO—this time by blackmailing Europe. By threatening to open the spigot and flood Europe with the refugees fleeing the Middle East—from the situation Turkey helped create with ISIS—Turkey guaranteed itself a restart of EU accession negotiations as well as visa liberalization for its citizens traveling to EU member states. What could go wrong? Think Paris.

This cunning politicking by Turkey has successfully blackmailed the European Union into turning a blind eye to its egregious abuses of human rights and the press, while cynically legitimizing its aggressive policy in the eyes of its domestic audience. How often does the media report that Turkey is considered “the world’s biggest prison” for journalists?

During the Cold War, Turkey’s importance was bolstered as NATO’s southern flank. Turkey leveraged its geography and received the better end of the deal with cumulative military aid worth tens of billions of dollars, military training by our best and brightest, as well as an Article 5 security guarantee. Today there is no Soviet Union, and Turkey looks to dominate its surrounding countries by having a NATO skirt to hide under should things get heated.

Turkey needs us far more than we need them. Turkey needs to be sobered up before it makes a bigger mockery of the United States, NATO and Europe—or, worse yet, before they force the West into a confrontation based solely on Turkish national interests, which seems to be the revival of the decrepit Ottoman Empire.

Movses Ter-Oganesyan is a fellow at the Eurasian Research and Analysis Institute. His research interests include the wider Caucasus as well as American Foreign Policy.