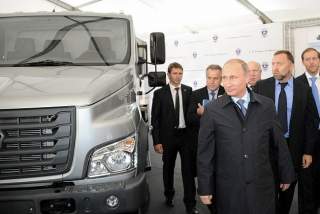 Editor’s Note: The following is the third of a series of articles from the Center for the National Interest’s new report: Costs of a New Cold War: The U.S.-Russia Confrontation over Ukraine. You can read the full report here.

Russia’s relations with the West entered a new and less-than-happy chapter earlier this year. U.S. and European economic sanctions are the defining and consistent feature of this new chapter, though Russia’s actual and potential responses are becoming increasingly important.

So far, Russia’s “internal diseases” have harmed it much more than Western sanctions. Likewise, the sanctions do not undermine the stability of the Russian political regime. On the contrary, the “personal” sanctions contribute to the Putin-driven soft nationalization of the elites, and the state can more than make up for financial losses sustained by certain individuals and companies. For the elements of Russian society already dissatisfied with the Russian government, such sanctions are a “bonus” of sorts that adds to their satisfaction over the Crimea annexation—Russia gets Crimea and despised elites are punished too.

Nevertheless, new sanctions on Russia’s financial, energy, and defense sectors in July and September will have growing costs for key companies and the overall economy over time. Moscow’s retaliatory ban on certain Western agricultural imports shows that Russia is ready to engage in a tit-for-tat economic conflict—even though Russian officials recognize the economic asymmetries between their country and the West.

Most importantly, beginning a new chapter is not the same as ending one—and it by no means preordains the final pages of the book. Perhaps ironically, the harder the West tries to isolate Russia, the more Western actions will strengthen forces inside the country that welcome isolation. This will make it increasingly difficult to find necessary cooperative solutions to current differences, and it is likely to increase costs on all sides.

To start, it is necessary to understand the nature of the present-day Russian economy. In 2013, Russia posted 1.3% growth, the worst performance over President Vladimir Putin’s fifteen years in power except in 2009, when Russia faced the effects of the global financial crisis. As most are aware, Russia’s economy depends on commodity exports, which account for more than half of the nation’s fiscal revenues. This has created an institutional environment featuring excessive regulations, pervasive corruption, rent-seeking, and exploitation of administrative barriers. The Russian government addresses economic problems through micromanagement; this is known inside Russia as “manual control”—direct personal intervention by the President or other top leaders. Small- and medium-sized enterprises occupy an insignificant and precarious position in the economy, where high administrative barriers limit their growth. Private property rights lack adequate protection.

Against this background, a tide of social challenges is rising on a national scale. One is the threat of depopulation. Russia’s Ministry of Economic Development expects Russia’s able-bodied population to decline by at least 8-9% by 2020. Labor’s poor geographic mobility exacerbates the labor shortage problem. Most experts comment on the poor quality of and diminished access to health and education; the growth of geographic inequality in terms of development standards and quality of life; and depletion of the nation’s natural capital.

Despite sustained high oil and gas prices, the Russian economy has effectively been stagnant. GDP growth has consistently declined in recent years, from 4.3% in 2011, to 3.4% in 2012 and to 1.3% in 2013. For quite some time, numerous sources (including Russian officials) have been projecting, with some concern, that the economy could soon experience a recession. In recent years, inflation has fluctuated in the 6.1-6.6% range. Though tight monetary policies pursued by the Ministry of Finance and the Central Bank have admittedly been fairly successful, promoting quality growth requires keeping inflation below 3%.

Currently, the IMF expects Russia to grow at 0.2% in 2014, while the OECD expects a growth rate of 0.5%. The European Bank for Reconstruction and Development (EBRD) assumes zero growth, while the Russian Ministry of Economic Development offers a number of scenarios: 0.5% growth if the Ukrainian situation turns out favorably, or a decline of 0.2% to 0.3% in the worst-case scenario.

As for the sanctions, the Economic Development Ministry believes that Russia has sufficient reserves to make up for the resulting losses in the short term. Top Russian officials believe this too. Still, over the longer term, economic officials recognize and acknowledge that strong sanctions could destabilize the fiscal system and constrain technological modernization, due to restrictions on technology imports, investment, and application of best practices.

In late April, Standard & Poor's downgraded Russia from BBB to BBB-, the lowest investment grade, with a negative outlook. Next, Standard & Poor's similarly revised the investment ratings of Moscow, St. Petersburg[1], a number of major Russian companies (including Gazprom, Rosneft, LUKOIL, and Russian Railways), and banks (VEB and VTB). In the cases of Alfa-Bank and Promsvyazbank, Standard and Poor’s only revised the outlook downward. The agency justified its decision by stating, “these companies would be unlikely to withstand a sovereign default, considering their significant dependence on Russia from the operational and financial perspective.”[2] During the summer, the three ratings agencies reaffirmed their negative outlooks for Russia.

Some politicians and experts have suggested that the ratings downgrade was itself a sanction. However, most believe that the sanctions simply hastened rating agency decisions that would have happened anyway, as the grounds for such actions arose prior to this spring. While “somewhat politically motivated,” the downgrades represented a “response to actual deterioration of our macro situation” according to Alexey Ulyukaev, Russia’s Minister for Economic Development.

Experts believe that a perceptibly higher cost of any external funding for Russia represents a major negative effect of even the “softest” sanctions regime. Foreign loans have been very popular among major Russian businesses to date, given their lower rates and “debt service costs.” According to Bank of Russia statistics, such facilities have accounted for almost nine-tenths of Russia’s aggregate external debt (i.e., $653 billion out of $732 billion).

Likewise, there has been a marked deterioration of the environment for new initial public offerings and Eurobond placements against a generally livelier IPO scene in Europe and Asia. In early March, London Stock Exchange flotation of Lenta, a major Russian retailer, precipitated a dramatic drop in its share price. Promsvyazbank, TKS Bank, Bashneft, and Detsky Mir postponed scheduled offerings.

As president of the All-Russian Insurers’ Union, I continuously monitor this sector of the domestic financial market. So far, the sanctions have yet to become the primary concern for Russian companies. Ruble depreciation, declining capitalization, and reduced corporate budgets (leading to cuts in insurance costs) have clearly damaged market players in the insurance sector. However, I believe we would still be tallying losses in this area even if Crimea had not happened.

The “sanctions regime” is also suspending various processes and postponing decisions crucial for promoting Russia's economic interests. As early as March, the European Commission de facto froze a decision that would have exempted the OPAL gas distribution system in eastern Germany—it transports imported Russian gas southward from the Baltic Sea—from some regulations in the EU’s Third Energy Package. The South Stream project is running into ever-greater obstacles, and Bulgaria has announced the project’s suspension, pending approval by the European Commission.

Despite some differences in their approaches to sanctions, the United States and Europe have both imposed tight restrictions on any business operations involving Crimea. Although the annexation of Crimea creates mainly local economic challenges for Russia, those challenges are nevertheless exceedingly difficult. Baseline conditions in Crimea, which used to be at least as good as they were across Russia, dramatically worsened in March 2014. Nowadays, Crimea means worn-out infrastructure, a lack of natural resources, dependence on Ukraine for both, inability to raise Western investment, plus vulnerable and tenuous summer tourism that serves as the key pillar of the regional economy and of the livelihoods of a majority of local residents. At the same time, major Russian companies cannot enter the Peninsula directly without risking a Western response.