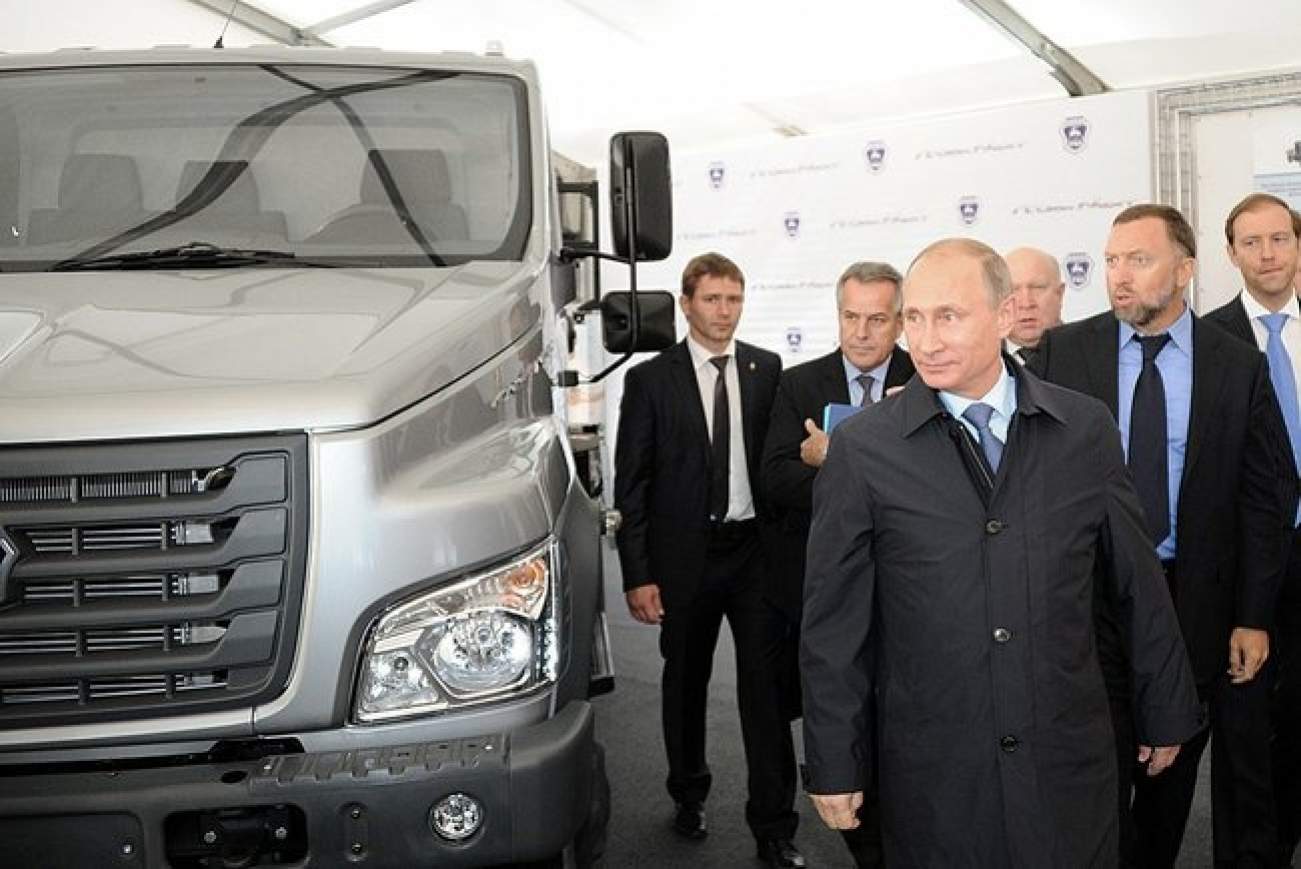 Russia’s development plan for the new Crimean Federal District keeps getting costlier with every successive iteration. At this point, the Russian government has fixed spending at about $20 billion through 2020, but the actual amount of spending will doubtless keep growing. For instance, the estimated cost of the bridge across the Kerch Strait has risen from $3 billion to $4.3 billion to nearly $6 billion. During the design and engineering phase, and during potential construction, the cost will probably escalate again more than once.

Economic losses from Russia’s damaged relationship with Ukraine have further tilted the balance.  Kiev’s “European choice” made some losses unavoidable, but Moscow has done its best to maximize such losses. Clearly, Ukraine’s own losses will be much more serious, given the different scale of the two economies and the nature of their relationship. However, Russia will also lose a lot—e.g., a major source of raw materials, rolled steel, and machinery components, including defense items.

Russian assets in Ukraine, worth at least $30 billion, are now at risk. In late April, a court seized an Odessa refinery that the Russian bank VTB had obtained by way of loan recovery from Sergiy Kurchenko, a fledgling Ukrainian oligarch and ally of former President Viktor Yanukovych who is now a fugitive. Mass-scale asset divestment will probably not happen, but many businesses will find it harder to operate. Ukraine’s role as an interim transportation link between Russia and Europe (and, via the Black Sea ports, other global regions) will probably weaken as well.

Since the tragic crash of Malaysian Airlines Flight 17, European leaders have substantially reconsidered their attitudes toward sanctions against Russia. The dominant viewpoint in the United States and the EU is that while separatists are directly to blame for the downing of MH17, the Kremlin is the main culprit. The EU’s subsequent adoption of limited, so-called sectoral sanctions, the third and most painful round of sanctions, signals that the conflict between the West and Russia has gained considerable momentum.

As a result, Russia faces U.S. and EU economic machines comprising 800 million people on both sides of the Atlantic who together produce half of the world’s wealth. Accounting for just 2% of global GDP, Russia can hardly win such a boxing match—particularly since more than 50% of Russia’s trade turnover is with the European Union. Taxes on the EU’s energy imports make up almost half of Russia’s federal budget.

Now, Russian state banks, energy monopolies, and defense companies could be seriously hurt. Refinancing state companies’ $200 billion in debt will already create a serious problem; according to estimates from former Vice Prime Minister Kudrin’s think tank, underinvestment and capital flight caused by the sanctions scare will deprive the Russian economy of another $200 billion. Russian economic experts believe we risk losing up to one-third of our annual budget next year due to international sanctions, in the worst-case scenario.

Still, Russia can live with sanctions for the short term. Oil exports still guarantee us a relatively steady flow of income, and hard currency and gold reserves remain at around $500 billion. But the sanctions will eventually hit hard. Both domestic forecasts and estimates from the International Monetary Fund and the World Bank put Russia’s GDP growth at 0.2%, with a probable recession looming. Restrictions on much needed Western investments and technology is a serious impediment.

Meanwhile, the sanctions have also solidified Russia’s new and unfavorable position in the system of Western-dominated international, political, and economic relations. Though Russia is not yet considered a rogue nation, many in the West clearly see it as a problem country and an unhelpful actor. Such positioning contributes to worsening conditions on the domestic economic front.

Notwithstanding the increasing impact of sanctions, President Putin is not likely to change his policy approach under pressure. As Russia’s officials see it, the Iran sanctions and Cuba embargo demonstrate that such a situation can persist for quite some time, especially since Russia is a relatively large and wealthy country. With this in mind, the Putin government will not give in to Western sanctions, but will instead look for ways to minimize their impact on Russia and to ensure the survival of the current political and economic system in Russia.

Domestically, Putin will try to rally the Russian elite and population around his idea that “Russia is a besieged fortress.” Although it may seem strange to Americans and Europeans, this may actually become an easier sell for Putin as sanctions become more severe, for two reasons.

First, tough sanctions will do real damage to Western-oriented internationalists inside Russia. Although there is a new generation of Russian business leaders and so-called global Russians who find Western values to be highly compatible with their mode of life, this group was relatively weak even before the Ukraine crisis. Sanctions have further reduced their voice in debates over Russia’s internal affairs. To stage a comeback, they will have to have some breathing space—something impossible under sanctions that reduce economic opportunities and distort Russia’s political climate. Under harsh and continuing sanctions, this new generation will become weaker and weaker. Russia’s Western-oriented economic elite cannot thrive in isolation from the rest of the world, and Western officials should take note of this.

Second, the isolationists around Putin who do not see their future in the wider world are already numerically and emotionally stronger than are modernizers and progressives—and this problem will get worse the longer the sanctions last. That is why the actions already taken by the West have caused a surge of enthusiasm among Russian isolationists. Kremlin efforts to mobilize their support in order to strengthen the political order will further empower them.

Neo-conservative Russian isolationists are already influential around President Putin. In the absence of any visible carrots from the West, using the stick endlessly will only strengthen the neo-conservative segment of the Russian elite and population. Russia today is far from the Iranian situation, where the supreme leader decided to avoid selecting a belligerent president to make negotiations possible. In Russia, the current situation can persist for a relatively long time, although the country already feels a strain on its budget and public expenditures.

Internationally, the sanctions regime has forced Moscow to look more intensely for new markets and new lenders. The Russian President's recent visit to China is evidence of this. Deeper cooperation with China will have costs for Russia—energy experts quickly discovered the secret price per cubic meter of Russian gas deliveries to China, and it was not what Moscow hoped for in the past. The political price for Russia of current and future Russian-Chinese agreements is anyone's guess.

The incumbent Russian leadership is unlikely to have any immediate interest in becoming too dependent upon China. However, it may perceive it as the lesser of two evils, as traditional sources of “stability,” the highest value of social life in present-day Russia, are gradually drying up. This forces the government to look for new sources of stability. Russians are already debating the scenario of “Russia as a Chinese political satellite and economic periphery” in earnest, even if most are not yet prepared to accept it.

Russia’s recent restrictions on agricultural imports from countries that have imposed sanctions show that Moscow is ready to retaliate economically against the West; beyond this, Prime Minister Dmitry Medvedev has now threatened to restrict access to Russia’s airspace. What are the Russian options if the confrontation over Ukraine continues to worsen?

One of the most visible proposals is the Glazyev plan, prepared by Sergey Glazyev, a Russian presidential advisor on economic matters who has been responsible for Russia’s integration plans vis-à-vis Ukraine. Mr. Glazyev has proposed a series of steps to increase Russia’s independence from Western economies and to attempt to damage these economies in the process. His proposed measures included the following:

·  stop exports of precious metals, rare earths, and other strategic metals and minerals;

·  build a SWIFT-like domestic system for interbank information-sharing within the Commonwealth of Independent States, along with a domestic payment system;

·  radically reduce the share of U.S. dollar instruments and debt of other pro-sanctions nations as a percentage of Russia’s foreign currency reserves;

·  transfer offshore-registered titles to strategic enterprises, and transfer mineral rights, real estate, and other property back to domestic jurisdiction.

Russia’s neo-conservative isolationists generally support these measures, which would seek to move Russia’s assets and transactions away from dollars and Euros toward other currencies, develop a parallel international financial system, force Russian businesses and their assets and investment to return to Russia, and keep “strategic minerals” in the country.