The White Working Class Will Still Suffer, Trump or Not 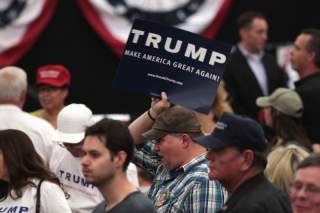 This is why I knocked the Wall Street Journal writer Bret Stephens in these pages a couple of weeks ago. Stephens contends that Hillary Clinton must pulverize Trump so that “Republican voters learn their lesson that they cannot nominate a man so manifestly unqualified to be president.” But Trump isn’t primarily a Republican phenomenon, nor is he a lab experiment of the alt-right, as Hillary Clinton suggested last week. He isn’t a product of classifiable politics at all. He’s a howl of rage on behalf of the white working class, who might not agree with him on everything or even think he’s equipped for the White House, but who are tired of failed economic and foreign policies that come at the expense of their livelihoods.

How the white working class puts itself back together again, and where circumstances inflicted on them end and personal irresponsibility begins, are necessary sociological questions, but they won’t be cracked in time to dilute this year’s headline issue, which is that right now many whites are furious and have a consequently cavalier attitude towards their leaders. So Stephens may get his wish and Trump may be demolished on Election Day. Huzzah, but then what? A Trump loss will affect many things, but driving the dope out of Greenfield and assuaging the misery in Appalachia will not be among them.