The Winners and Losers of Trump's Tax Act 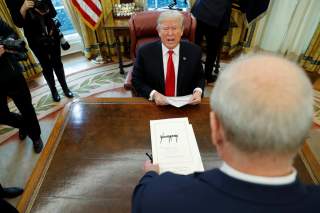 The Tax Cuts and Jobs Act is not for everyone—both literally and figuratively. On the corporate side, it will be a boon to U.S. businesses. It is difficult to see the negatives there. But for many individuals, particularly on the coasts, the effect of the legislation will be increase their tax burdens. A more fitting name for the legislation would be the Selective Tax Cuts and (Maybe Some?) Jobs Act.

Many individuals in states, counties and cities with high tax rates have routinely used the State and Local Tax Deduction to lower their effective tax rates. Referred to as the SALT deduction, it allows people who pay taxes locally to write them off against their federal-tax obligation. The TCJ capped the SALT deduction at $10,000, a figure that will hurt the upper-middle class.

While capping the SALT deduction will hurt the upper and upper-middle classes, it is unlikely to hurt many in the middle or lower tax brackets. Much of this is due to a doubling of the standard deduction, which will cause more taxpayers to use it and simplify their tax returns. In essence, this makes itemizing deductions less likely for a significant portion of taxpayers.

Further, the capping of the mortgage-interest deduction at $750,000 will also be an issue for the upper-middle class. Not as much as the SALT, but the MID was previously available for up to the first $1 million. The result is a lower value of real estate as a tax shield.

Interestingly, the reduction of MID is likely to have a negative effect on the pricing of homes around the $1 million mark, but it is unlikely to slow the pace of home sales significantly (which have recently been a bright spot for the U.S. economy). This, again, is a way that the upper-middle class will feel a negative effect from the tax reform.

As many pundits have pointed out, the negative effects from capping the SALT deduction and lowering the MID amount are concentrated in areas that Democrats dominate the electorate. States along the coasts tend to have relatively high state tax burdens, and they tend to lean blue. Cities and large population centers also have a tendency toward higher local taxes. But the overlooked aspect of the SALT and MID is that Democrats also tend to dominate politics in cities. New York is certainly not alone, but the reform will affect places like New York so much that their governor is threatening to sue over it.

So, there are significant losers in the deal. But there are also tremendous winners. For instance, hedge funds and private equity groups kept the majority of their loopholes—including the infamous carried interest. Given that the expectations were for the tax plan to lean heavily toward the populist side of politics, keeping these loopholes was a bit of a coup.

What is truly remarkable about the TCJ is how skewed the benefits are to corporations. By reducing the corporate tax rate to 21 percent and repealing the corporate AMT (which was 20 percent), the tax bill keeps the United States competitive with other low-tax countries.

Will businesses plow the money back into their operations or deliver it back to shareholders? Recent headlines would suggest that companies are reinvesting in their people by giving out bonuses to their employees. Banks were the first to announce their bonus plans, then came airlines. And while the motivations could be questioned, the actions are laudable.

This is unlikely to continue, however. The staggering amount of benefit that companies could feel from tax reform is difficult to articulate. For example, the amount of money that companies actually make in the S&P 500 could jump by more than 10 percent simply due to the direct effects of the tax reform, and that is on the lower end of the estimates.

And here is the thing about that figure. It does not factor in the effect of a faster economy. Once those are factored into the equation and the year begins to unfold, it will be interesting to see how much companies handle the optics of greater shareholder payouts.

That leads to one of the more salient points of the tax reform package: it will be exceedingly good for investors. Certainly in terms of near-term stock price increases, but also over time as lower corporate taxes on earnings overseas will likely incentivize increasing dividends and buybacks.

Sure, there is likely to be a bit of an increase in capital expenditures and other business spending. But the vast majority of the long-term gains will go to investors. Even the reason for the near-term boost in capital spending has little to do with the boost from lower tax rates. Much of that incentive is due to the ability to depreciate capital expenditures at a faster clip than before.

The tax shifts will be undeniably positive for corporations. For those upper-middle coasters, it is not a tax break at all. The hits seem to come from all sides as well. There is simply no escaping its wrath. From SALT biting to the potential for home prices to fall in the $1 million range, it is simply an unpleasant place to be. But—for those in the investing class—the world looks much better following the tax bill.