The World in 2035: Britain’s Frightening Forecast 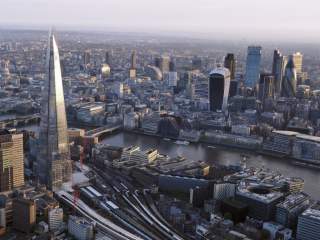 As Americans fret about the rise of China and a perceived decline in U.S. power, consider this: How does the future look to a second-tier nation that isn't America or China, but faces many of the same challenges?

Britain's Ministry of Defense has released a new forecast of what the world will look like in 2035, and it doesn't seem a friendly place for the UK, let alone the U.S. The report, titled "Future Operating Environment 2035," is also interesting as a look at the world through the eyes of a former imperial superpower managing the decline of its power.

The study sees America and China as the leading global powers. But unfortunately for a middleweight nation like Britain, more middleweights are entering the ring. "Other rising powers, such as Brazil and India, will take a strategic interest beyond their own regions in pursuit of resources," British analysts note. "States such as Australia, Canada, Germany, Indonesia, Japan, Mexico, Nigeria, South Africa and Turkey all look likely to have increasing regional significance."

The study frankly admits that Britain's influence could "decline out to 2035 as we compete within a larger peer group." On the other hand, British influence "will continue to be bolstered by our system of government and our diplomatic, cultural and commercial weight, as well as the professional reputation of our Armed Forces."

Sound familiar? The same can be said about American power.

In some ways, the study deals with specifically British issues, such as coming to terms with the inevitable inadequacies of being a second-tier power. For example, the report acknowledges that Britain's military and civilian infrastructure is highly dependent on space satellites, yet the country must rely on foreign providers for launch capabilities. Britain will also find itself falling behind in the military technology race: "The UK and other Western militaries, probably with the exception of the U.S., will almost certainly have been overtaken in some technologies by 2035, and may need to become accustomed to being overmatched by derived military capabilities.”

But other issues resonate with both Washington and Whitehall. Like the Americans, British planners worry about the diffusion of sophisticated military technology to rogue nations and terrorists. "Proliferation of technology means that a range of actors will have access to systems which used to be the sole preserve of developed countries," the study predicts. "At the same time, Western countries are likely to be overtaken economically, meaning that they can be outspent on mass and capability. Furthermore, the West is unlikely to be able to rely entirely on high-end prime platforms to maintain its edge, as these look set to become considerably more expensive—making procurement of sufficient numbers unviable."

Cyberspace, and cheap sensors and electronic warfare systems, will enable small actors to disrupt the operations of advanced Western militaries. Climate change—and the study does acknowledge its existence through rising sea levels—will force the British military to conduct more humanitarian missions, at the same time as greater use of "lawfare" legal challenges by Britain's enemies will hamstring the military.

Immigration will also be a factor. "Military operations overseas may be influenced by the concerns of UK diaspora communities, such as the desire to provide humanitarian assistance to victims of a natural disaster from their country of origin," says the study. "While it is possible that UK society may be less homogenous as a result of larger, better-connected diasporas (and the potential security challenges they may bring), a more globally-engaged population could also present significant opportunities."

As for solutions, British defense planners can only trot out the familiar buzz words such as building a "resilient" military and "joint operations." In other words, they can't really think of a solution. And unlike America, they can't try to compensate with trillion-dollar projects like the F-35.

America is far, far from becoming a second-tier power. But power inevitably changes: the issue isn't just decline, but how to manage decline to minimize the loss of power.