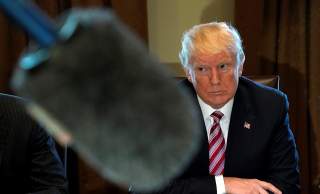 When U.S. president Donald Trump announced sweeping new tariffs of 25 percent on imported steel and 10 percent on aluminum Thursday, the world’s commentariat broke out in a frenzy of condemnation. Trump was accused of playing politics in a way that could “destabilize the global economy.” It was said that Trump’s actions could “bring global trade growth to a halt” (notwithstanding the fact that levels of global trade have already been declining since 2011). His critics screamed “trade war.” Canadian and European leaders immediately threatened retaliation. China didn’t, but American China experts predicted that Beijing soon would.

It is likely that few, if any, of these experts have read the two detailed Commerce Department reports that prompted the tariff decision, or the Defense Department memo endorsing their findings. The goal of the tariffs proposed by Commerce and endorsed by the president isn’t to punish Chinese dumping or put an end to free trade. It’s to ensure that the United States retains any domestic steel and aluminum production at all. Like President Barack Obama’s controversial auto industry bailout in 2009, these tariffs are about keeping an industry for the future, not about making it profitable today.

If China has merely expressed concern over Trump’s plans, it’s because China is not really the target of the planned tariffs. China’s massive state-owned steel and aluminum firms may ultimately lie behind the world’s glutted markets, but Chinese products account for only a fraction of U.S. imports (2.2 percent for steel and 10.6 percent for aluminum). The real problem is that other countries—including allies like Canada and the European Union—have responded to years of Chinese dumping by subsidizing their own industries and imposing broad tariffs on Chinese steel. American antidumping measures have traditionally been more narrowly focused. In a sense, Trump is only catching up with what the rest of the world is doing already.

The simple fact is that the world produces much more steel and aluminum than it needs. A global shakeout is inevitable, and every country wants to make sure that its own industries are the ones that survive. The only question is: who will blink first? If one country has done a lot of blinking over the last twenty years, it’s the United States, as the Commerce Department report amply documents. Embracing a free-market approach, being reluctant to provide subsidies, applying very selective tariffs and never even thinking about nationalizing its strategic industries, the United States has consistently ceded market share to its statist rivals overseas. The Trump tariffs bluntly but effectively draw a line under twenty years of creeping retreat.

In its evaluation of the Commerce Department reports, the Defense Department flatly concluded that “the systematic use of unfair trade practices to intentionally erode our innovation and manufacturing industrial base poses a risk to our national security” and agreed with the Commerce Department’s conclusion “that imports of foreign steel and aluminum based on unfair trading practices impair the national security.” Of the three national-security responses offered by Commerce, DoD preferred the second option, targeted tariffs, over the first (global tariffs) and third (global quotas). But that’s a question of strategy, not principle.

The DoD is, obviously, a military organization, not an economic one. It is “concerned about the negative impact on our key allies” of a broad, uniform tariff. So the DoD prefers targeted tariffs on countries that, except for South Korea, are not U.S. allies. But as the DoD memo admits, targeted tariffs raise complicated enforcement challenges due to the international transshipment of steel and other jurisdiction-shifting exercises. The Commerce report estimated that targeted tariffs would have to be at least 53 percent on steel and 23.6 percent on aluminum to be effective. Trump’s flat tariffs of 25 percent and 10 percent would be easier to implement and harder to avoid.

A single, global tariff also sends a simple, universally understood message that this time, the United States is not going to blink first. This dispute is not about the World Trade Organization, playing by the rules, commitment to globalization or the much-hyped international liberal order. It’s about the fact that some countries are going to have to give up their steel and aluminum industries. The United States should not be one of them. Countries that have historically made high steel and aluminum output a matter of national policy should act responsibly to dismantle their bloated industrial bases. Until they do (and there are no signs that they will), the U.S. government should act to ensure a fair price for those few American producers that remain.