As the World Frets over the Taiwan Call, Trump's Talk with Kazakhstan Might Be the Real Shocker 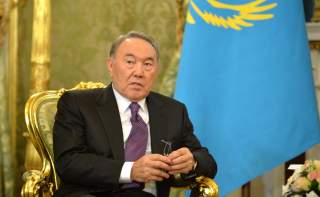 The November 30 telephone call between President-elect Donald J. Trump and President Nursultan Nazarbayev of Kazakhstan was a shocker, first because such a call took a place at all and second because the topics discussed were wide-ranging and extended to U.S. relations with Russia. The tone of the conversation was unusually warm.

The call from a newly elected president to a long-standing one made geopolitical sense as the incoming administration concentrates on building relationships with key countries in key regions. Kazakhstan is in the heart of Eurasia, bordering both Russia and China: the two main headaches of American foreign policy.

Indeed, faced with growing Chinese and Russian global influence emboldened by eight years of President Obama’s foreign policy, a newly inaugurated President Trump may be taking a closer look at Eurasia and considering the role it can play in supporting U.S. interests internationally.  Kazakhstan is a good place to start. It is a newly minted non-permanent member of the United Nations Security Council and shares and borders of over five thousand miles with Russia on one side and China on the other.

Kazakhstan has seen significant progress since breaking from the Soviet Union in 1991. Much credit goes to the country’s founding President, Nursultan Nazarbayev. And Mr. Trump was right to have reportedly praised Kazakhstan’s development in that phone call.

Most observers predicted a dismal future for a country trying to unravel from 71 years of Soviet domination. But instead, it has thrived. To be sure, Nazarbayev has his fair share of critics and opponents. But nothing succeeds like success, and that’s what he has brought to his country.  Now he is solidifying his success with a Plan of the Nation, unveiled last year at his inauguration. Already an upper middle-income country, the goal of the 100 Concrete Step Plan is to place Kazakhstan among the top thirty countries of the world by 2050.

So what’s that got to do with American interests? Or keeping Chinese and Russian ambitions in check? Or curtailing terrorism? It’s the role Kazakhstan can play in the future as a U.S. partner on the international scene diplomatically and economically – and perhaps militarily. One only need look at how the Chinese have masterfully played their presence and subsequent influence in Africa, while the United States stood by idly and watched. We shouldn’t be so passive about Central Asia. Under a new President we should hope to take a more strategic, long-term view and bind our alliances.

Kazakhstan brings a unique perspective to global matters. Nuclear non-proliferation is, perhaps, the single area where its voice is authoritative and is heard across the world loud and clear. When Kazakhstan gained independence from the Soviet Union some 25 years ago, it inherited the world’s fourth largest stockpile of nuclear weapons.  By 1995 they were gone – with U.S. help. Now Kazakhstan is speaking out loudly against North Korean proliferation and it actively supported the international efforts to resolve the tensions over the Iranian nuclear program.

As a member of the Organization of Islamic Cooperation (OIC), the second largest intergovernmental organization after the United Nations, U.S. engagement with Kazakhstan is also vital. 70 percent of Kazakhstan’s seventeen million people are moderate Muslims.  Mindful of the pervasive threat radical Islam poses, it has approached the matter head on. Its newly formed Ministry for Religious and Civil Society Affairs is countering the internal threat of religious extremism through information and education. Their model focuses on those who may have already been influenced by radical Islam and can be applied throughout the Muslim world.

From an economic standpoint, Kazakhstan’s oil discoveries (3 percent of the world’s reserves) with their railways and roads create a land bridge between Asia and Europe which portend well for economic growth throughout Central Eurasia. Already welcoming multi-billion-dollar investments from and cooperation with major U.S. corporations such as Chevron, ExxonMobil, GE and many others, Kazakhstan stands out as a key economic partner in the heart of a huge area which is likely to experience economic boom in the years to come. An aspiring member of the Organization for Economic Cooperation and Development (OECD), whose principles formed President Nazarbayev’s Plan of the Nation, the United States would do well to support Kazakhstan’s formal entry when the country meets OECD’s criteria.

In sum, 25 years after independence from the Soviets, the United States would be well served by continuing to build on its good ties with Eurasia’s pivotal country and recognize Kazakhstan’s importance as a strong ally: geographically, economically and diplomatically.

And as Afghanistan remains a vortex of instability, the United States might consider expanding security cooperation with Kazakhstan, focusing on counterterrorism and regional security.  These small investments on the part of the United States may provide large returns over the years to 2050 and beyond. Our continued role as a world leader will be determined by those who we support and who support us. Kazakhstan is a relationship the United States should foster.

Mr. Trump could make history by becoming the first sitting U.S. president to ever visit Kazakhstan.

Bill Cowan is a FOX News Channel contributor and internationally acknowledged expert in the areas of terrorism, homeland security, intelligence and military special operations. A retired Marine Corps officer, Cowan spent three-and-a-half years on combat assignments in Vietnam and was involved in direct support to sensitive U.S. government programs until 2013.