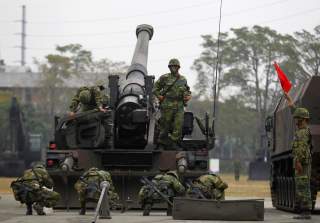 Taiwan’s national-security and counterespionage chief, in a question-and-answer period at the national legislature, this week warned that China might invade the island republic.

Peng’s warning came at about the same time Taiwan’s defense ministry reported that its ships and planes tailed China’s only operational aircraft carrier and its escorts as they transited the Taiwan Strait. The Liaoning group, the ministry announced Wednesday, left Taiwan’s air-defense identification zone on a southwesterly course.

The transit comes at a time of growing tension over the island republic that China claims as its thirty-fourth province. In recent days, Beijing has repeatedly threatened war. The People’s Republic of China is not the Third Reich, but the world is nonetheless approaching a 1939 moment in East Asia.

Xi Jinping, newly armed with a second term as China’s president, is now full of fire and fury. During his address at the close of the annual session of the National People’s Congress on Tuesday, he promised “full unification of the motherland.” That’s code for annexation of Taiwan, large portions of India, dozens of Japanese islands, a speck of South Korea, Philippine rocks and reefs, and almost all the waters of the South China Sea.

Xi’s speech, which ran about forty minutes, contained ominous comments. “We are resolved to fight the bloody battle against our enemies,” he said, “with a strong determination to take our place in the world.”

The words of the Chinese leader are frightening. As no national leader has been talking about waging war on China, Xi’s reference to blood is a sign he is thirsting for war. And because he promised to take territory under the control of other states, he, in unmistakable tones, threatened acts of aggression.

China has threatened many neighbors in recent months, but Taiwan is the crisis of the moment. Last Friday, President Donald Trump signed the Taiwan Travel Act, which encourages the administration to send high-level officials to Taiwan and to accept visits of high Taiwan officials to the United States. The act, which is no more than an expression of congressional support for Taipei, does not require any such visits.

Beijing nonetheless took great offense. The Global Times, which appeared to be speaking for the Communist Party in this instance, threatened to use force. Certain acts authorized by the legislation violated China’s Anti-Secession Law, the paper said, thereby authorizing China to employ “non-peaceful means.”

For decades, Taiwan was thought to be an especially sensitive issue for Beijing, and Xi and his predecessors declared they would never compromise the island’s sovereignty. Other capitals, therefore, deferred to China’s wishes, hoping to not provoke its leaders.

In these days of Chinese expansionism, however, every sovereignty dispute has become a Taiwan—in other words, a do-or-die matter for the Communist Party. Tellingly, China has not been able to compromise a land border since settling with Tajikistan at the beginning of this decade. With regard to sea claims, the most it has been able to do during this period was confirm it did not claim Indonesia’s Natuna Islands (although it still, without justification, claims rights to the Exclusive Economic Zone generated by the Natunas).

Beijing’s intransigence has worked, and Chinese policymakers, taking advantage of foreign timidity, have then expanded territorial demands. The escalation of ambitions after China seized Scarborough Shoal in 2012 highlights a dangerous dynamic in the Chinese capital.

In the spring of that year, Washington brokered an agreement between Beijing and Manila for both sides to withdraw their small vessels from the strategic feature, close to the main Philippine island of Luzon. Only Manila complied with the deal, leaving China in control. The Obama administration, despite the blatant deception, did not enforce the agreement it had arranged, undoubtedly hoping to avoid confrontation with China.

By doing nothing, however, the United States handed an easy win to the worst elements in Beijing. Those elements then ramped up pressure on Second Thomas Shoal, another Philippine reef in the South China Sea, and the Senkakus, uninhabited islets under Japanese administration in the East China Sea.

Soon after that, Chinese state institutions, backed by Chinese state media, began a campaign to demand Japan hand over Okinawa and the rest of the Ryukyu island chain.

Unfortunately, Beijing, emboldened by success, has developed an expansionist mentality. And this means, among other things, that Washington’s policy of strategic ambiguity is no longer appropriate. For decades, American policymakers, for fear of emboldening Taiwan’s leaders, refused to publicly pledge to defend the island against a Chinese attack.

Today, the risk is not that Taiwan’s leadership will try to change the status quo. Taiwan’s President Tsai Ing-wen, although she represents the “independence”-minded Democratic Progressive Party, is nonetheless cautious, hoping to preserve a favorable situation in which her vibrant democracy thrives as an independent state.

The risk the world faces is the one Xi has promised: a Chinese takeover of Taiwan. On the island, survey and survey show that only around 10 percent of the population wants unification with the People’s Republic of China.

Beijing, if it could, would almost certainly snuff out Taiwan’s democratic system. Xi is not only demanding territory of others; he is also trying, with a concerted campaign, to undermine the concept of representative governance.

To preserve democracy worldwide, Washington needs to defend it in Taiwan. “By now there is a pretty broad consensus that we got China wrong,” Gerrit van der Wees, a former Dutch diplomat now teaching at George Mason University, told the National Interest. “Let us get Taiwan right. We owe that to our own democratic principles and to the values we share with the 23 million people of Taiwan.”

And America needs to do that before it is too late. Aggressors, once they achieve success, are hard to stop without force. Hitler, for instance, did not in fact believe that Britain and France would go to war if Germany invaded Poland, as they promised in the summer of 1939. German thinking was that London and Paris did nothing when the Third Reich remilitarized the Rhineland in 1936, absorbed Austria in 1938, and seized in 1939 the portion of Czechoslovakia Berlin did not obtain through the Munich Pact. Accordingly, British and French promises to protect Poland sounded hollow.

Chinese leaders could be approaching the stage where they too believe they can do what they want. It’s best to disabuse of them of that notion. One of the ways to do that is for the Trump administration to send senior officials to Taipei, to pledge that America will defend the island.

But it’s no use giving ringing promises once aggressors believe they will not be opposed, and Chinese leaders, now talking about blood, are fast becoming confident.

Image: Soldiers operate an M10 tank destroyer during a military exercise at an army base in Kaohsiung County, southern Taiwan. Reuters/Pichi Chuang.