The World Should Wish Trump Success with North Korea 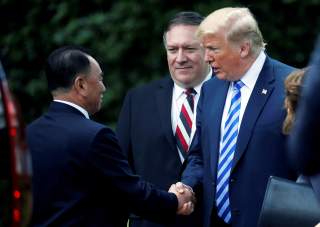 This weekend, United States President Donald Trump flies to Singapore to meet North Korean leader Kim Jong-un. In the annals of U.S. diplomatic history, it will undoubtedly be one of America's strangest meetings. The months preceding it have been characterized by an extraordinary will-they-or-won’t-they turbulence. Trump has all but admitted he is not preparing, creating much confusion over what he might actually say. As of this writing, it is one week out from the event, and still, no one knows quite what the agenda will be.

On the North Korean side, much anxiety has turned on the unique logistical problems of a backward Orwellian tyranny. There are fears Kim's aged Soviet-era plane cannot make the trip and may crash. Kim also fears assassination, and he apparently wants lots of bodyguards on site, creating the strange possibility of North Korean henchmen, the U.S. Secret Service, and Singaporean security all wandering around the meeting locations.

If this were not enough, Dennis Rodman will show up too, because, well, why wouldn’t he? This whole thing is taking on a carnival-like atmosphere, and the principals are not even on the ground yet. Furthermore, Trump has at least acknowledged some reality, admitting that the meeting will likely not achieve a breakthrough.

Much of the media coverage will likely focus on the surreality of this whole meeting. Trump is more reality TV star than politician and has perhaps inevitably focused on the ratings and hype. On the other hand, Kim has governed as a vicious tyrant since his father passed in 2011. He too has no obvious governing skills. His sole qualification is the ‘Mt. Paekdu bloodline.’ And Rodman will surely insert himself into this somehow. The Trump White House has also, as recently as the Shangri-La Dialogue this past weekend, pushed for the highly unlikely goal of complete, verifiable, irreversible disarmament (CVID) of North Korea. When CVID falls through, the world will be treated to the bizarre sight of the U.S. president laughing up before the cameras with the world’s worst human rights abuser for apparently no major progress.

For these many reasons some analysts (including me, twice) have argued that the summit should be canceled or postponed. More time and more staff work would help enormously. Much of the work from the Agreed Framework of the 1990s and the Six Party Talks of the 2000s could be re-purposed here. The gaps are extensive and time too short, but a deal is not impossible.

Nevertheless, all parties seem to want this summit to happen on schedule. The North Koreans want the photo-ops of their leader meeting the U.S. president as a peer equal. Trump seems almost equally as anxious for this, likely for the TV coverage and attention it generates. A minimally successful summit will likely be marketed back home as a ‘win’ to help blunt the possible ‘blue wave’ in this fall’s midterm congressional elections. South Korean President Moon Jae-In has pushed this hard too, likely to keep the peace momentum from the spring rolling and to prevent Trump from backsliding to his ‘fire and fury’ belligerence of 2017.

At this point then, it is too late to cancel and almost certainly too late to postpone. To do so now would have negative second-order effects. America must push through this and hope for the best.

This may be hard for the never-Trumpers (and I would include myself in that camp), but it is nonetheless the right thing at this point. For as awful as one may find Donald Trump, he is morally superior to Kim Jong-un. He does represent, however badly, a nation with values superior to those on which North Korea is founded. Anyone opposed to Trump must not let their desire for schadenfreude at Trump's expense to block their vision of the larger picture— if Trump can somehow pull a balance-positive deal out of Kim (for the both the U.S. and its East Asian allies), that would be a significant achievement.

I agree that this is unlikely, but if the U.S. must have this summit, this is the outcome Americans should all hope for. No one should want Trump to fail, even if they dislike him or think he will fail. That is an important distinction. I too believe Trump overhypes his wheeler-and-dealer abilities and my prediction for the summit has long been that it will be bust—but I would be happy to be wrong.

Trump has routinely claimed himself to be a negotiator, and his high business esteem among his voters is based on this image. Many of Trump’s ‘deals’ in the past suggest this is not so. Trump University and Trump Steaks, for example, look like cons instead. But this is Trump’s chance to prove his chops. David Brooks, for example, has suggested that perhaps Trump's brushes with the American underworld help him understand Kim. This is unnerving in its own right, but perhaps it is so. Trump is unlike any U.S. president. Maybe he can pull this off, and the U.S. should want him to, whatever (many) misgivings Americans have about the rest of his presidency.

As mentioned, I still believe a bust is the most likely outcome. Indeed at this point, it looks to be nothingburger of photos and short, ‘get to know you’ meetings that yield nothing. But, again, if this meeting must happen, then let America should pull for Trump given just how important the stakes. Prove your critics wrong, Mr. President. Here’s your chance to show everyone the art of the deal.