Breaking Through the Iranian Nuclear Impasse 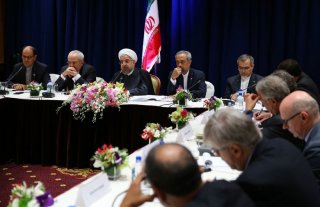 With only weeks left until the deadline for a final agreement between the P5+1 and Iran on its disputed nuclear program, sanctions and enrichment remain the sticking points. The focus on maintaining an indigenous uranium-enrichment capacity for Iran, and the equal focus by opponents of a nuclear deal on eliminating any enrichment capacity have hardened into redlines. Meanwhile, the P5+1 has so far been unable to provide specifics on sanctions relief under an agreement, and congressional opposition in the United States threatens to preempt or derail any agreement reached. Only a solution that addresses the top priorities off all key parties can break this deadlock.

Rather than haggling over centrifuges, crafting a complex, gradual and tenuous sanctions-relief mechanism, and hoping a recalcitrant Congress can be brought along, the negotiating parties should demonstrate the courage to adopt a truly comprehensive and enduring solution that all parties can accept. Iran should agree to abandon its nuclear program in full, and in exchange, the United States and the P5+1 should agree to lift all UN, U.S. and EU economic sanctions related to Iran’s nuclear program. Implementation will require both sides to institute robust verification mechanisms to ensure compliance. (Some U.S. and EU national-level sanctions, based upon Iran’s support for terrorism and its human rights record, could remain in place until those issues are addressed.)

This is the most enduring and complete solution as it achieves all concerned parties’ top priorities. But after insisting on “an inalienable right” to nuclear enrichment for so long, would Iran really abandon this right, and go even further to dismantle its nuclear program entirely? To answer this question, we must discern the fundamental national interests behind Iran’s position.

Some have argued that Iran’s quest for nuclear technology is primarily a matter of status and prestige. While achieving regional-power status has been a factor in Iran’s nuclear quest, it is not the most important factor. Iran’s current quest for nuclear-energy technology began in the 1950s with U.S. support, and for WMD technology, including nuclear, chemical/biological and missile programs began during the latter part of the Iran-Iraq war, and accelerated afterwards. The Iranian leadership took hard strategic lessons from that horrific war.

First, they realized their nascent Islamic Republic faced severe isolation and hostility, both from its neighbors and the West. Second, they learned that revolutionary zeal alone was no match for modern weapons technology. The lessons they drew in the formative years of the revolution and developed in the decades since were self-sufficiency (in response to international isolation) and an asymmetric security doctrine (in response to severe disadvantages in sophisticated military technology compared to the United States and even its neighbors).

If we apply these lessons to Iran’s quest for nuclear technology, we understand that its isolation and relative weakness, rather than a quest for regional power status, are the key drivers for its position. Iran pursued WMD technology, as well as more traditional asymmetric warfare activities, as deterrents intended to offset its conventional-weapons disadvantage. The self-sufficiency/asymmetry doctrinal approach also informed their quest to pursue indigenous nuclear power and make it 20 percent of their energy generation equation.

As a result, the Iranian economy contracted in 2012 and 2013. Iran’s oil exports shrank to less than 1 million barrels per day as of November 2013, and remain at low levels. While high oil prices and limited sanctions relief under the Interim Agreement have partially offset this trend, this relief will likely end if a final agreement is not reached by the November 24 deadline and oil prices continue to decline. Therefore, long before nuclear power can deliver any substantial energy security, the energy dependent Iranian economy faces the prospect of collapse.

In addition, Iran sits in a high seismic hazard zone, with the Bushehr reactor at the center of the most active part of this zone. Since going active in 2012, the reactor has endured three major and dozens of moderate-to-minor earthquakes, leading Iran to suspend Bushehr’s operations for several months in 2013 and 2014 in response. An April 2013 Carnegie Endowment Report highlights these substantial environmental risks. Despite Iran’s contention that Bushehr operations are safe, Iran’s neighbors remain deeply concerned about the regional impact of a nuclear accident triggered by an earthquake. Under these conditions, nuclear power for Iran is a grave and unnecessary risk.

But Iran need not face this dire future of international isolation, economic crisis and potential environmental disaster. If Iran abandons its nuclear program entirely in exchange for full access to international oil/gas technology and markets, the resulting economic growth would far exceed any anticipated benefits from a nuclear-energy program. In fact, with reasonable projected growth rates, the benefits would offset the billions Iran has sunk into its nuclear program within only a few years.

In addition, if Iran is freed of its isolation and allowed to grow economically as part of the region, and offered assurances that it would not face military attack or external regime-change activities, the leadership—especially after successfully concluding the breakthrough agreement discussed here—would have the domestic standing to finally end Iran’s destabilizing regional activities and substantially reform its internal political and economic policies.

The hardest part of any agreement between longtime adversaries is selling it back home. Iran faces the toughest sell in Tehran, as the nuclear program has been portrayed as an issue of national honor, and hardliners opposed to any perceived “capitulation” could rally against giving it up. But the tangible economic benefits would be so overwhelmingly popular, particularly coupled with international security assurances, the alternatives to reaching an agreement so troubling and the environmental consequences of a nuclear accident so evocative, that the Iranian leadership could reasonably achieve the required national consensus to support its implementation.

Finally, while such an agreement would trigger optimism, continued vigilance is warranted. An economically integrated Iran could well have a positive impact on regional stability, but experts have credibly argued that an empowered Iran without dramatic changes in its regional military and security policies may pose an even greater threat. Indeed, that is a concern and should be addressed. That said, many regional security challenges—the rise of IS, Iraq, Syria, the sectarian struggle, Afghanistan and others—would benefit from a more constructive Iranian role.

All parties, including the P5+1, Iran and the people and governments of the region, will need courage to undertake the dramatic step presented here and to sustain this agreement through implementation. The benefits of this agreement, however, will be widely dispersed throughout the international community and offer the real prospect of enduring cooperation towards prosperity and security in the Middle East. In a deeply troubled region, this would be a welcome change.

Ramin Asgard is a former Foreign Service Officer with the Department of State. While at State, he held several key posts involving Iran, including as Director of the Iran Regional Presence Office (IRPO) in Dubai, Political Advisor at U.S. Central Command, and as Director of Voice of America Persian. (If space allows) He has also served in Saudi Arabia, Afghanistan, Iraq, the UAE, and Turkey.