There’s Nothing Progressive about a Multipolar World 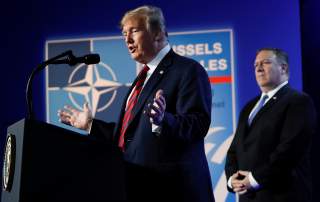 It’s become a pillar of both progressive and internationalist foreign-policy vision: to be multipolar means a safer, better, and more prosperous future. Speaking at the Diplomatic Academy in Moscow, Secretary of State Madeleine Albright—who earlier in her tenure called the United States the “indispensable nation”—shifted gears to embrace a multipolar future. “A multipolar world of diversity and creativity among cultures, nations, and economies—is the world we believe we can build, one that will enrich our lives, and thrives on habits of peace and creative competition,” she declared. A few years after that, multipolarity was all the rage at Davos, the annual gathering of world elite. The New York Times summed up their consensus: “But compared to a view of the world that breaks cleanly into two spheres, the multipolar vision sounds more in step with the way the world actually works. And that, coming from the big thinkers gathered in Switzerland, represents real progress.”

Many in the Obama administration also embraced the idea of a multipolar future. Undersecretary of State William Burns spoke about how the world had changed for the better. After the end of the Cold War, he told a number of faith leaders, the world became “increasingly multipolar and profoundly interdependent.” That was a good thing. “The interconnectedness of human society can fuel economic, social and political change across the globe ever more quickly,” he explained, in the heady first weeks of the Arab Spring. Speaking in Kyrgyzstan, Assistant Secretary of State Nisha Desai Biswal declared, “We are at a point in history where increasingly there are interconnected relationships that go in multiple directions. We are not in a unipolar nor in a bipolar world. We are in a multipolar world where countries will need to have relationships across a broad spectrum. We welcome that.” Vice President Joe Biden in 2009 told a Ukrainian audience, “We are trying to build a multipolar world, in which like-minded nations make common cause of our common challenges.”

Secretary of State Hillary Clinton was more nuanced, stating that it her desire to tilt “the balance away from a multi-polar world and toward a multi-partner world.” At a 2015 ASEAN business summit in Kuala Lumpur, however, President Barack Obama, meanwhile, implied that those worried about multi-polarity were anachronistic. “There are people back home in the United States that say America—at a time when you see more emerging powers, a more multipolar world—that is worried about American leadership,” he said, before defending the manner in which his administration worked with overseas partners to shape a better future.

Many progressive organizations have furthered the multipolar vision beyond the corridors of power. Just Foreign Policy, for example, an organization that boasts many university professors and civil society activists on its board, decries the price of U.S. unilateralism and seeks “a more multilateral approach to foreign relations.” The American Friends Service Committee, a progressive group affiliated with the Quakers, blamed U.S. efforts to maintain its “stewardship of the world order” against the reality of multipolarity with sparking tension globally. Jean-Marie Guéhenno, a former President and CEO of the International Crisis Group, praised the multipolar reality, and cautioned “In such a connected world, retrenchment is not possible. No border force, no ‘homeland’ security can safeguard islands of peace and stability in an ocean of turmoil as isolationists would have it.” Andrew Bacevich, an American historian and professor emeritus at Boston University, penned an open letter to Sen. Elizabeth Warren in which he castigated those in Washington who did not recognize that the “multipolar global order” is already well underway.

While much of the animosity toward President Donald Trump in liberal and progressive rests in disgust with his rhetoric and behavior, some is also rooted in discord with the turn away from a multipolar vision which his unilateralism represents. “From this day forward, it's going to be only America first. America first,” Trump declared in his inaugural address.

Recent events, however, should give progressives pause about what a multipolar world means. Certainly, belief that the United States would act unilaterally, unwisely, and unfairly was sustenance to multipolarity’s cheerleaders at home and abroad. “Calling for a ‘multipolar world’ [became] a euphemism for opposing the Iraq war,” Foreign Policy’s Elizabeth Dickinson observed.

While President George W. Bush’s invasion of Iraq is widely disparaged today both in the United States and international circles today, only the passage of time will—like Harry S. Truman’s intervention in Korea—determine its place in history. However, as China, Russia, Iran, and Turkey challenge the post–World War II international order and seek regional dominance, their behavior reflects the reality of what a multipolar world truly means.

Consider, for example, China’s abduction of Meng Hongwei, the head of Interpol. Can international and multilateral organizations work if their leaders must subordinate themselves to the increasingly hardline Chinese Communist Party? Russia’s protection of Syrian President Bashar al-Assad’s use of chemical weapons, meanwhile, signals the end of a post–World War I consensus.

Critics can castigate the United States for upwards of two hundred thousand Iraqi deaths, which occurred as the result of the U.S. invasion of Iraq and its aftermath, but they often ignore the fact that America was not to blame for most of these deaths. Instead, they were a result of suicide bombings and other terrorist attacks sponsored by Tehran and others who too often avoid progressive accountability for their choices. Put another way, American training and tactics seek to minimize civilian casualties in all phases of conflict. Russia, however, has no such qualms: ask the Chechens. Nor should America’s history in the eighteenth and nineteenth centuries provide an excuse to ignore those, like China, who today would incarcerate a million citizens in re-education camps solely because of their ethnicity or religion.

Turkish president Recep Tayyip Erdoğan has been forthright in his desire to reshape the post–World War II international order. “Rather than justice, the existing global order is producing chaos, injustice and despair,” he argued in September 2018. But it is Erdoğan who has waged ethnic cleansing against Syrian Kurds, a campaign he may soon expand, and Erdoğan defended genocide in the Sudan and opened the floodgates for foreign fighters into the Islamic State.

It’s one thing to criticize or second-guess U.S. policy; that is the domain of democratic debate in Congress and during presidential campaigns and in dueling op-eds in a free press, but it is nonsensical to suggest that any alternate pole—Moscow, Beijing, Tehran, or Ankara—would make the world a more peaceful place or better respect the evolving international human-rights regime. The one thing revisionist states have in common is that they tolerate neither debate nor dissonance. That is a lesson Uighurs, Ukrainians, and Kurds have discovered, as have Meng Hongwei and Turkey’s imprisoned journalists. It is time American and European progressives recognize it as well, for the stakes are far greater than simply American power.