There’s Only One Hope Left for Venezuela 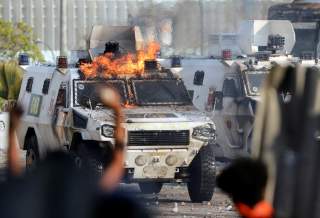 Venezuela’s National Assembly (VNA) has formally started the procedure to rejoin the Rio Treaty, an international pact that would give legal ground to regional military action to oust dictator Nicolas Maduro from power. It’s a wise move since Venezuela’s democratic leaders want to save millions of citizens from famine and despair, but they must not stop there. If Maduro is to go—and go he must—the VNA will have to activate Article 187 #11 of the Constitution, which requests international military support. Threatening the use of force is the only hope of ousting Maduro’s murderous regime while avoiding the possibility of sham transition that leaves the military in power even if Maduro is eventually gone.

On April 30, Venezuelans were hopeful for relief. Juan Guaidó, the country’s legitimate interim President, took to Twitter, calling for protesters to level the final blow to Maduro. He claimed to have taken control of the key La Carlota military airbase. Moreover, in his video Guaidó was surrounded by soldiers and had at his side the political prisoner Leopoldo López who had, until then, been under house arrest.

As protests broke everywhere, the National Guard quickly showed that Guaidó didn’t really have control over the military. The regime’s forces killed at least four Venezuelans, including two minors. Furthermore, the skirmishes resulted in more than three-hundred wounded and over two-hundred-forty people kidnapped—and likely tortured. Meanwhile, U.S. officials later revealed Venezuela’s military strongmen had made a deal with Guaidó but had backed down at the last minute.

In the end, we were reminded of what Venezuelans have known for years: there’s no negotiating with the Maduro regime.

After all, negotiating ignores well-known facts about Venezuela’s military and the regime’s international allies. Since 2002, the regime has brainwashed soldiers into killing their fellow citizens and rewarded loyal commanders with stakes in the regime’s drug business. Maduro’s allies—Cuba, Russia, China, and Iran—have financed it with tens of billions of dollars, brought Hezbollah terrorists to train the murderous militias known as colectivos, and ushered Cuban spies into the military to ruin any plan to oust the regime. In exchange, these nations, especially Cuba, got free oil and drilling rights. Negotiation with these actors is futile because, with a democratic Venezuela, their government-sponsored narcotrafficking and free oil days would come to an end, and they know it.

Despite the regime’s international allies, Venezuelans enjoy the most favorable international context of the last two decades. Since 2015, regime allies and do-nothing governments have been voted out of office across Latin America. And since President Trump took office, the United States has led the world in sanctioning regime members, expelling the regime from the global financial system, imposing an oil embargo and recognizing Guaidó’s government.

These were excellent steps forward, but Venezuelans are still facing an unbearable humanitarian crisis. Over five million of us have fled since the socialist revolution began in 1999, with millions more expected to flee. Worse, seven million require urgent humanitarian assistance. All while Maduro is still in power.

More sanctions aren’t the answer. There’s little else that can be sanctioned beyond the U.S. oil embargo. Dialogue won’t work either, as any future dialogue efforts between the resistance and the regime would forget the years of failed talks the regime has already had. And Guaidó truly cannot offer a better deal to the military than the pardons he has already offered—unless he wished to keep their kleptocracy in power. This would be the worst outcome possible.

Guaidó’s power lies in the 90 percent of Venezuelans who support him, but they’re unarmed. Maduro’s power, on the other hand, relies on an increasingly indoctrinated and Cuban-infiltrated military and colectivos which he intends to keep using to kill innocent Venezuelans.

Consequently, the only option with a shot at success is Article 187 of Venezuela’s Constitution. Its numeral 11 clause gives the National Assembly the power to authorize foreign military missions in Venezuela. It’s why, the Venezuelan National Assembly should request a regional coalition that includes Colombia, Brazil, the United States, and other nations to bring Venezuela the humanitarian aid that Maduro blocked before. Nearly 90 percent of Venezuelans are on board with this option, and the legitimate Supreme Court has, for months, called on Guaidó to pursue it.

Understandably, U.S. military intervention scares many Americans. But this isn’t another costly and counterproductive war. Rather, it’s the sovereign plea of the Venezuelan people for salvation in the form of a limited international military operation. Once the coalition is in Venezuelan territory, if the military hasn’t already turned on Maduro, Guaidó should lead citizens to march towards the Presidential Palace. They would give Maduro an ultimatum, and the coalition could protect protestors from Maduro’s thugs. This imposing threat will likely be enough for Venezuela’s military to turn against Maduro, handing Guaidó control over the country, restoring democracy, and ending the humanitarian crisis.

Doing nothing will result in death for millions of starving and sick Venezuelans and push several million more refugees to exile—a tragedy that the region and the international community cannot allow. Venezuela’s democratic leaders must unite and activate article 187 #11, or suffer the consequences of allowing this narco-terrorist, socialist regime to stay in power indefinitely. Venezuelans didn’t elect this deadly fate, and they deserve freedom and prosperity. May it be someday remembered that other nations took a stand for Venezuelans when they needed it the most.