Is There Any Way to Counter China's Gray Zone Tactics in the South China Sea? 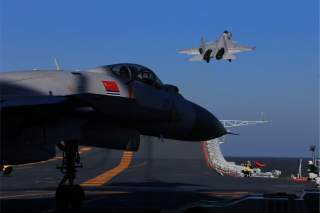 China and India’s moves to de-escalate tensions over the Doklam standoff inspired commentary about how Beijing’s coercive strategies can be countered. Some may argue that after all, India can be deemed a peer competitor to China in terms of relative power, especially militarily. Both countries are nuclear-weapon states and if push ever comes to shove in renewed border hostilities, they might be mindful of escalating armed action beyond the threshold of outright war and, worse, cross the Rubicon into nuclear conflict.

India’s lessons on dealing with China’s coercion are indeed interesting. But what about looking at Beijing’s rivals in the context of an obvious power asymmetry? Its Southeast Asian adversaries in the South China Sea immediately come to mind. That region is made up of smaller, weaker nation-states, which do not have India’s array of power tools and other forms of strategic leverages. It might be tempting to conclude that these Southeast Asian countries are easy pickings for Beijing to successfully exercise its coercive strategy.

In fact, not too long after the Association of Southeast Asian Nations (ASEAN) issued a joint statement about the South China Sea that amounted to no more than a slap on Beijing’s wrist. Additionally, both parties formally endorsed a framework for a proposed code of conduct to manage disputes after there were revelations about the presence of several Chinese vessels spotted close to Philippine-occupied Thitu Island. A Philippine fishery patrol vessel was allegedly harassed as well.

This is where Manila’s reaction differs from New Delhi’s swift and decisive counter against a perceived Chinese attempt to alter the status quo in Doklam. True to the typical fashion of a pro-Beijing Rodrigo Duterte administration, Philippine foreign affairs secretary Alan Peter Cayetano neither confirmed nor denied the report. Instead, he downplayed its significance. “The presence of ships alone does not mean anything,” he remarked.

One may be tempted to empathize with Manila’s attempt to overlook China’s new antics in the disputed waters, for the country needs to confront other teething security challenges posed by terrorists and drug lords. Duterte has shifted away from Washington to Beijing for aid and investments to feed socioeconomic development, including his much-touted “Build Build Build” nationwide infrastructure program, which he promoted during the Belt and Road Forum hosted by his generous new friend, Chinese president Xi Jinping.

Simply put, a flare-up in the South China Sea does not serve his administration’s interest. Duterte and his close associates, such as equally pro-China Cayetano, do not wish to rock the boat and risk Beijing withholding those carrots it promised Manila. It thus appears inevitable for the Philippines to capitulate to China, not just shelving the arbitral award that rendered it overwhelming legal victory over its much larger and more powerful northern neighbor; but if necessary, it must suffer in silence from what Robert Haddick argued as “salami slicing” gray-zone strategies customarily utilized by Beijing to wear down opponents in the disputed waters.

Duterte isn’t alone. He can find a close confidante in Malaysian prime minister Najib Razak who, as a general election looms, has also turned to Beijing for aid and investments to shore up his ruling party’s standing. Najib tries hard to ingratiate himself with China, such as through his “durian diplomacy.” He shuts up domestic critics who fear that he is selling out Malaysia’s sovereignty for Chinese largesse, even to the extent of exhibiting ambivalence—in the name of being nonconfrontational—about frequent Chinese coastguard incursions near features located well within Malaysia’s sea jurisdiction.

Is this the preordained destiny of smaller and weaker states like the Philippines and Malaysia, to capitulate to China’s gray-zone tactics? The International Security Advisory Board defines gray-zone approaches in its January 2017 report for the Department of State as “the use of techniques to achieve a nation’s goals and frustrate those of its rivals by employing instruments of power—often asymmetric and ambiguous in character—that are not direct use of acknowledged regular military forces.” China’s island-building program in the South China Sea counts as one such example, not to mention its gunboat diplomacy, which includes the use of its fabled fishing militia.

Manila and Kuala Lumpur fall neatly into the category of meek rivals that Beijing very much desires—preferring not to escalate their disputes beyond the “red line” of outright shooting war, and not imperiling their quest for Chinese benefits. But before one starts to assume Malaysia and the Philippines’ responses to China as constituting the norm in Southeast Asia, we must consider whether it’s inevitable to conflate between upholding one’s sovereignty and rights on the one hand, and promoting economic ties on the other.

Indonesia and Vietnam, which have serious stakes in the South China Sea, have proved that there is no such false dichotomy. At first glance, the two cash-strapped and resource-constrained countries could have been easy walkovers for Beijing’s gray-zone antics. But that wasn’t the case.

Suffice to say, Sino-Indonesian ties have blossomed in the past one decade or so. Jakarta has not only sought investments from Beijing, but it has even purchased Chinese weapons. However, it did not become a pushover when a fishing boat incident flared up in March 2016. That year the Chinese coast guard rammed its fishing boat, the Kway Fey 10078, well within Jakarta’s jurisdictional waters off the Natuna Islands in a forceful intervention against Indonesian fishery law enforcement. Instead of downplaying the episode, President Joko Widodo, whose legitimacy of his Global Maritime Fulcrum vision was in danger of being derailed by anything less than resolve against Beijing’s encroachment, visited Natuna Islands aboard a warship.

In an even more ominous demonstration that Jakarta would tolerate no more nonsense from Beijing, the Indonesian Navy beefed up its presence at the islands. In June of that same year the navy fired warning shots at several Chinese fishing boats operating illegally in Natuna waters, reportedly injuring a fisherman in the process. Beijing protested, but Jakarta was unfazed. “We will not hesitate to take decisive action against foreign ships, whatever their flag and nationality, when they commit violations in Indonesian territory,” Indonesian navy spokesman 1st Adm. Edi Sucipto said after the incident. Since then, no further Chinese transgression has been reported.

But there was no subsequent major fallout. Chinese investments in Indonesia were unaffected; in fact, those investments grew by 291 percent over the January–September in 2016, hitting $1.6 billion by the following January. Still, Jakarta wished to signal Beijing that it should not be trifled with. In October 2016, Jakarta sought more Japanese investments and a month later, announced its preference for Japan to clinch a semi-high-speed train project. The following January, both countries agreed to step up maritime-security cooperation. Beijing grossly miscalculated that its gray-zone tactic would work against Indonesia, like what it did back in March 2013, thus pushing the latter to its rival.

Bilateral ties gradually recovered, with Indonesia having successfully garnered greater Chinese interest to ramp up investments. At the same time, the Southeast Asian country did not lax on its South China Sea interest, even renaming part of the waters as the North Natuna Sea. Beyond just criticizing this move, Beijing desisted from retaliation.

What about Vietnam? Since ancient history, this feisty Southeast Asian country has maintained a proven track record of resisting Chinese aggression. The naval skirmishes in the South China Sea in 1974 and 1988 could have been impressed upon Hanoi the futility of opposing Beijing in the disputed waters. Yet when China placed its deep-sea oil rig, the HD-981, in contested waters off Vietnamese coast and near to the Paracel Islands in May 2014, Hanoi responded decisively—and was at least a match for Beijing’s gray-zone antic. It carefully avoided sending military forces to face-off with the Chinese, instead deploying its coastguard and fishery enforcement vessels—and even its own fishing militia.

The standoff dragged on until back-channel diplomacy—mainly between the two communist parties—resulted in both sides backing down by end of July. Still, Hanoi had reasons to pat itself on the back, albeit at a cost. The sustained impasse compelled Vietnam to shelve routine maintenance for its coastguard and fishery-enforcement vessels, affecting their operational availability for other tasks. If the standoff had dragged on, Vietnam, already disadvantaged in its physical capacity, could have blinked first. Nonetheless, Hanoi’s gambit paid off. Beijing had some newfound respect for its erstwhile Southeast Asian rival.

Vietnam did not suffer repercussions from the standoff. Being economically tied to China, characterized by a trade deficit in the latter’s favor, did not stop Vietnam from testing its powerful northern neighbor from time to time. In September and October 2014, top Vietnamese and Indian leaders exchanged visits and inked numerous agreements, including for closer defense- and maritime-security cooperation. Of peculiar interest is one pact that called for India’s state-owned ONGC Videsh Limited to “expand its presence in Vietnam and further consolidate cooperation in exploration and other areas between the two countries in energy sector.” One recalls that China deployed the oil rig in response to Vietnam’s offer of additional offshore blocks to the Indian firm in waters claimed by Beijing.