Is There a Deep State? 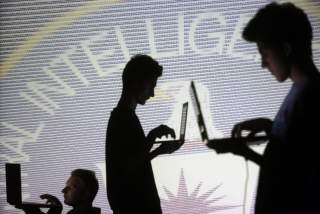 Emma M. Ashford: “The Deep State Isn't What You Think​”

John Deutch: “The Deep State Is a Distraction”

Michael Lind: "The 'Deep State' Is No Supervillain"

Gary Hart: "The 'Deep State' Conspiracy Is a Joke"

George Beebe: "The Deep State Has Long Abused Its Power"

Christopher A. Preble: "How We Got Trump's Clash with the Deep State"

William Ruger: "Groupthink, Not the Deep State, Is the Real Culprit"

IN ALFRED Hitchcock’s 1959 movie North by Northwest, the protagonist Roger Thornhill, a genial New York advertising man played by Cary Grant, is suddenly swept up into clandestine Cold War machinations. Only after he encounters an American spymaster named the Professor, who is based on CIA director Allen Dulles, the brother of John Foster Dulles and a charter member of the American Establishment, does Thornhill begin to decipher the turbulent series of events, including a harrowing encounter with the anonymous pilot of a crop duster, that have put his life in jeopardy. “I don’t like the games you play,” Thornhill declares. “War is hell, Mr. Thornhill,” the Professor retorts, “even when it’s a cold one.” Thornhill is enraged. “Perhaps you ought to start learning,” he says, “how to lose a few cold wars.”

It’s a telling exchange. Suspicions of an amoral caste of foreign-policy mandarins intent on manipulating, or even subverting, American democracy for their own ends are hardly new. Instead, apprehensions about a cabal have formed a persistent theme of American political debate. Three years after the appearance of Hitchcock’s film, the journalist Richard Rovere wrote a famous spoof, complete with footnotes, about searching for the American Establishment in the American Scholar. His minute researches about “a more or less closed and self-sustaining institution that holds a preponderance of power in our more or less open society” prompted William F. Buckley Jr. to publish a response in Harper’s. Buckley was having none of Rovere’s levity. “The fact of the matter,” wrote Buckley, “is that Mr. Rovere’s disavowals notwithstanding, there is a thing which, properly understood, might well be called an American Establishment; and the success of Mr. Rovere’s essay wholly depends on a sort of nervous apprehension of the correctness of the essential insight.” Indeed, two decades later, Leonard Silk and Mark Silk went on to offer a highly informative conspectus of the institutions of the foreign-policy elite in their 1980 book The American Establishment. There the matter rested.

In recent months, however, apprehensions about a deep state, led by intelligence officials at the FBI, CIA and Justice Department, have acquired a fresh prominence. The conservative Christian leader Franklin Graham is sounding alarms about a “coup d’état” against Donald Trump, and the president himself is warning on Twitter about the sinister operations of a “Deep State Justice Department.” How much credence should be placed in such assertions? Does a deep state exist? Is there really a concerted effort to subvert the Trump administration by government officials? Or is that an outlandish allegation? The National Interest invited leading experts, a number of whom have served in government in senior positions, to explicate and evaluate the controversy surrounding a deep state.