There Is No Military Path to Victory in Afghanistan 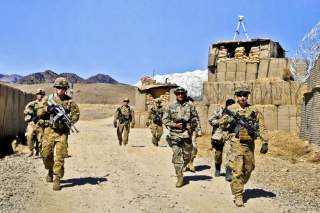 Warlordism, now deeply embedded in Afghanistan’s politics, creates another source instability, even as it provides relatively good governance in some locales.

Strongmen with private militias exist at all levels of the Afghan polity. Some have parlayed their clout to secure top posts in the central government. The Hazara warlord Karim Khalili was Hamid Karzai’s Vice President. The Uzbek chieftain Abdul Rashid Dostum, who has a blood-curdling reputation for cruelty, currently serves as Vice President, no matter that Ghani once called him a “known killer.” (Members of Dostum’s Junbish militia, which has a long record for brutality against civilians, recently attacked a Tajik group, prompting security forces to intervene.)

Among the warlords who wield local power, Atta Mohammed Noor, a Tajik and the governor of Balkh province, where he has promoted order and economic development, may be the best known to outsiders. He and others like him represent an entrenched pattern: powerful men with armed retainers who make tactical alliances with the state (and one another) and, though appointed by the president, are ultimately a law unto themselves.

The prospect of a savvy Kabul government controlling the main levers of politics and devolving power to warlord rulers while also manipulating their rivalries artfully makes for an intriguing idea. But with infighting in Kabul and an insurgency on the upswing, that’s not a feasible model for political equilibrium in Afghanistan. Heightened war will make the central government weaker, the local warlords stronger.

As for the balance on the battlefield, on the one hand American and Afghan forces have inflicted heavy losses on the Taliban since 2002. Many of its senior commanders and leaders have been killed, most recently (in May) Mullah Akhtar Mohammad Mansour, the movement’s Emir. And feuds have divided its ranks, threatening the unity of an insurgency that has always been riven by factionalism.

On the other hand, Taliban fighters not only remain standing, they now control, or have established a presence in, more of Afghanistan’s territory than at any time since the war began, including in the north and west, outside their Pashtun bastions in the south and east.

Only in a clutch of Afghanistan’s thirty-four provinces (such as Balkh, Bamyan, Ghor, Daykondi, Jowzjan and Samangan) do the Taliban not pose a major threat. Yet even in these places they make their presence felt, assassinating or abducting officials and police and punishing ordinary folk pitilessly for violating the movement’s draconian definition of morality.

The lack of a Pashtun majority in these areas explains their relative stability. In recent years, however, the traditionally Pashtun-based Taliban insurgency has attracted, and inducted into leadership positions, local and central, Tajiks, Uzbeks and Turkmen who have turned against the government for various reasons. These include the state’s corruption and economic failures and the cruelties of locally recruited militias on which it relies to bolster security, including the so-called Afghan Local Police, an American-inspired creation.

The Kabul government has been forced to yield considerable ground over the past two years—five percent in the first five months of 2016 alone—and now controls only two-thirds of the country. The Taliban controls or contests the rest and according to some assessments may hold a much bigger percentage. The number of ANA soldiers killed in battle increased by 28 percent between 2014 and 2015, and the force has been stretched thin because it has had to fight on multiple fronts.

Though the Taliban has taken a pounding for almost fifteen years, they have displayed doggedness, regained momentum and remain unwilling to lay down their weapons. Nor do they seem in any hurry to negotiate a peace. Mansour’s successor as Emir, Mullah Haibatullah Akhunzada, has vowed to continue the jihad. The Taliban won’t rule Afghanistan again, but they will be part of its political future—in war or peace.

After fifteen years of fighting and the expenditure of trillions of dollars, this is the reality America faces in Afghanistan. Whatever it is, success it is not.

Yet many military experts and former officials urge that we must stay the course. But if the United States could not do better than it has after making a prolonged, substantial and expensive attempt, what are the odds of success, say, five years down the line?

Those convinced that ending the war would be a big mistake make several points to back their claim.

America’s credibility will suffer, they say. (Within our foreign policy establishment, credibility becomes the all-purpose rationale when all other arguments ring hollow.) As it happens, the commonplace claim that abandoning a failed venture emboldens adversaries and demoralizes allies stands on a thin foundation of evidence. And the underlying logic resembles that of a man who persists in banging his head against a wall, refusing to stop for fear that onlookers will doubt his mettle if he does. He can reasonably anticipate but one result from such a demonstration of resolve: a huge headache, perhaps even a serious head injury.

Another argument made for keeping troops in Afghanistan rests on the prediction that their departure will turn it into an arena for freewheeling competition and conflict among neighboring countries. But as I have written elsewhere, that’s precisely what Afghanistan has been ever since the Taliban was toppled in 2001, with India, Pakistan and Iran being the main contenders. And it will continue to be, no matter what the United States does because, for many reasons, starting with geography, Afghanistan’s political trajectory matters far more to these countries than it does to the United States.

Then there’s the claim that outsiders’ rivalry over Afghanistan could lead to a war. India and Pakistan, for instance, might clash if the United States fails to stick around in Afghanistan and restrain them—and their collision could escalate, leading to the use of nuclear weapons.

There may well be another war between these two countries, but the spark won’t be their competition in Afghanistan, but rather an armed confrontation in Kashmir or a terrorist attack in a major Indian city that New Delhi traces to Islamabad. Neither scenario will be made less likely by the United States retaining a military presence in Afghanistan. And a spiral into nuclear war becomes a high probability outcome only if one assumes that the logic of deterrence, which has restrained other pairs of adversaries, somehow cannot apply to India and Pakistan.

The most frequent reason adduced for a continued American military role in Afghanistan involves the specter of Al Qaeda planning another 9/11-style attack from there.

Though Al Qaeda has absorbed serious blows, starting in Afghanistan in 2001, it has proved resilient and adaptive and remains a force to be reckoned with. It has established branches in many countries, any one of which could serve as a venue for hatching terrorist plots. The endless projection of American military power into various places in an effort to terminate terrorism resembles a game of whack-a-mole more than it does a wise strategy.

The 9/11 operation was indeed planned from Afghanistan. But the elements essential to its implementation—skyscrapers, airplanes, a modern banking system and flight training—all required access to modern, industrialized societies. A policy that secures the American homeland using multiple means, and with due regard for the delicate balance between ensuring citizens’ safety and protecting their liberty, will work better than employing the blunt instrument of military power across the world, and without any apparent endpoint.

The use of American military might in Iraq, Libya, Pakistan, Somalia and Afghanistan has ended up created circumstances and sentiments favorable to those who recruit young people and turn them towards terrorism. Moreover, the destruction of regimes and the inability to produce order thereafter has produced power vacuums that religious zealots, terrorists, warlords and ethnoreligious militias have filled. Civil war and terrorism have followed. The distribution of vast numbers of weapons, intended for armies or militias being trained by the United States, has led to their vanishing and ending up in the wrong hands or on the international arms bazaar for sale to the highest bidder.

The proposition that the American intervention in Afghanistan has made Afghans, neighboring states, or the United States more secure seems shaky to say the least. So does the recommendation that doing more of the same will eventually produce a better outcome.

In short, the war in Afghanistan has failed. It was a mistake to deploy troops there and to attempt something that the United States, its impressive resources notwithstanding, has been unable accomplish save in the special instances of Germany and Japan after World War II: remaking entire societies. While this error may be clearer in hindsight, it should now be evident that the plan to build a new Afghanistan has not succeeded—and indeed cannot.

None of the parties, internal or external, will find a military path to victory in Afghanistan. The violence can be ended only through a political settlement involving the warring parties and states, from the region and beyond, with stakes and influence in that country. The United States can and should remain active in the difficult and uncertain search for such a solution. It does not face a choice between clinging to the current policy and walking away.