There Is No Thirty Years' War in the Middle East 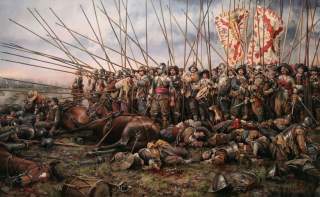 The Thirty Years’ War started in 1618 as a conflict between various Protestant and Catholic states in the Holy Roman Empire. It brought devastation and major population loss to the heart of Europe. Many observers of today’s Middle East have found similarities with that distant past.

Zbigniew Brzezinski, for instance, contended that several analogies exist “between what’s happening in the Middle East and what happened in Europe during the Thirty Years’ War several centuries ago, namely the rising of religious identification as the principal motive for political action.”

Many public figures expressed similar opinions, including Leon Panetta (“we are looking at kind of a 30-year war”), Andrew Sullivan (“the thirty years’ war brewing in the Middle East”) and Brendan Simms, according to whom “the root of the Thirty Years War, just as with many Middle Eastern ­conflicts today, lay in religious intolerance.”

Others have analyzed how the Thirty Years’ War ended, providing a “model” that could bring peace to the Middle East. Pulitzer winner Jack Miles wrote that “the Peace of Westphalia [in 1648] re-drew parts of the map of Europe. Peace in the Middle East may yet do the same.”

Each of these approaches is part of an ongoing process of the region’s “medievalization,” or the tendency to juxtapose an allegedly medieval Middle East with the modern, secular, normative West.

The Thirty Years’ Wars had indeed little to do with “religious identification.” Catholic France, for instance, supported the intervention of Protestant Sweden, led by Gustavus Adolphus, against the Holy Roman Empire and the Catholic League.

Both the Thirty Years’ War (a non-proxy conflict) and the many proxy wars in today’s Middle East show that religious issues alone can explain little. Four centuries ago, France, the Habsburgs, the German princes (whose conversion had little to do with theology and much with asserting their power) and other regional players clashed for very practical reasons. The same applies to the present-day Middle East, where cleavages and sectarian strife have much to do with economics, the short- and long-term effects of nationalism, and ongoing geopolitical dynamics.

In this respect, the decision to overthrow Saddam Hussein’s regime in 2003 and, more recently, the United States’ nonintervention in Syria, have been perceived by Saudi Arabia as indirect aid to Iran’s strategies. Largely as a consequence of this, over the last five years Riyadh has invested an enormous amount of resources in opposing the rise of any government or party that, in the Arab world, could have represented a credible alternative to the “Saudi model.” This also explains Riyadh’s decision to support the Egyptian army in the coup against former Islamist president Mohamed Morsi.

It is mainly to these considerations, and thus to Iran’s increased role in the region, that the continuation of the Middle East’s many proxy wars should be linked.

On the other hand, to imply that the region should make up for the centuries that divide it from a normative West is not only orientalist, but also tends to simplify a more complex picture. Early seventeenth-century Europe was facing the repercussions of the Protestant Reformation, which had started one century earlier. On top of this, the fanaticism that characterized Catholic-Protestant relations had no parallel in the history of the Middle East.

For many centuries, Sunnis and Shia—but also Christians, Jews and other religious groups—have lived side-by-side in the region, reaching a level of coexistence higher than any registered in most of the rest of the world.

In this sense, the thesis of the existence of a “1400-year war” between Sunnis and Shia, increasingly mentioned nowadays, is problematic, and tends to overlook that belonging to a certain sect had for centuries been just one, often secondary, way of expressing one’s identity.

This should not suggest that communal conflict was historically unknown. Instances of Sunni-Shia violence have been documented as early as the Middle Ages. Yet, their nature and scope are hardly comparable to more recent times. As noted by Fanar Haddad, “in early medieval Baghdad, there were sectarian clashes, but that is extremely different from what you have in the age of the nation state.”

It is meaningful that as recently as 2003, about 40 percent of Baghdad's population—that is, a quarter of whole Iraq—was composed of people born from Sunni-Shia mixed marriages; Baghdad's Iraqis called them “Sushis.”

The tangible reality of “Sushis” has today been largely replaced by an alternative vision, which prefigures—and often advocates—a “balkanization” of the region. This approach is rooted in the early 1990s and was expressed in an article (“Rethinking the Middle East”) by Bernard Lewis in Foreign Affairs in 1992.

Lewis contended that many states in the region are simply Western artificial creations (a common yet simplistic claim). He also predicted, among the most likely future scenarios, that the Middle East would have collapsed “into a chaos of squabbling, feuding, fighting sects, tribes, regions and parties.” As a result of this potential chaos, as noted by several scholars in the years to follow, it would have been much easier to force or convince the local populations to accept an order imposed from the outside.

Opinions similar to the one expressed by Lewis have been more recently implied by dozens of scholars. Joshua Landis, for instance, pointed out that the Middle East is witnessing the rearrangement of populations “to better fit the nation states that were fixed after WWI.” Others have gone a step further, contending that amid tragedy and horror, Syria, Iraq, Lebanon and Jordan “are becoming a bit more stable”, that a “Shiitestan” in Iraq’s south, as well as the “partition” of Syria, might represent stabilizing solutions, and that most likely we are witnessing the “end of Sykes-Picot.”

Indeed, the Sykes-Picot narrative—and the related themes of ethnocentricity or Westphalian borders—have been exploited in all directions and for diverse purposes, despite their very limited explanatory value and scope. By the end of World War I, the Sykes-Picot Agreement was already a dead letter, and virtually none of the issues (including the internationalization of Jerusalem) discussed in 1915–16 have been implemented, or else they have been irrelevant for many decades.

Sykes-Picot, for instance, aimed to divide present-day Syria and Iraq into three or four states, while the San Remo conference of 1920 explicitly postponed the determination of the borders. James Gelvin has argued that the reason why many people continue to refer to the end of the “Sykes-Picot order” is that “it assigns culpability to individuals rather than complicated historical events.”

What is still relevant is the mindset through which British and French authorities approached the region, particularly in the phase of history in which that agreement was signed. London and Paris defined local realities and dissent as expressions of primitive religious cleavages, and placed their newly crafted communal institutions (like the Supreme Muslim Council in Palestine) as modern systems above, in Laura Robson’s words, the “medieval fray.”

Communal and judicial structures envisioned and implemented in the second decade of the last century, in other words, succeeded in legally enshrining religious differences: a long-lasting outcome of the Sykes-Picot zeitgeist, not of the agreement that bears their names.

The “new Westphalia” advocated by Miles, as well as the reshuffling of the region’s people into ethnically or religiously defined states anticipated by Lewis and others, will not bring any benefit to the region and its inhabitants. Such opinions shed light on the points of view and the potential interests of those who support them, rather than on the interests and history of those who will continue to live in the region.

Lorenzo Kamel is Marie Curie Experienced Researcher at the Freiburg Institute for Advanced Studies and Senior Fellow at the Istituto Affari Internazionali. He is also a nonresident fellow at Harvard’s CMES, where he served as a postdoc fellow for two years. Among his most recent books are Arab Spring and Peripheries (Routledge 2016) and Imperial Perceptions of Palestine: British Influence and Power in Late Ottoman Times (I.B. Tauris 2015), shortlisted for the Palestine Book Award 2016.