Is There a Trump Doctrine? 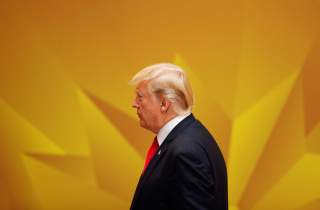 PRESIDENT TRUMP, unlike his predecessor, does not consider nuance a virtue. He is unlikely to appear at a Nobel Peace Prize ceremony anytime soon; we will not be treated to his reflections on the theology of St. Thomas Aquinas or Reinhold Niebuhr. Trump’s foreign policy has yet to crystallize into anything resembling a doctrine. It might be said that doctrines are overrated, of course. Frequently, they amount to post facto rationalizations for actions taken over the course of one or two presidential terms. The “Obama doctrine” came late in the day, as the former president entered his penultimate year in office. The “Reagan doctrine” only took shape from 1985, and even then its meaning was fiercely contested among those who styled themselves as its disciples. In the United Kingdom, Prime Minister Theresa May insists that political doctrines are largely the invention of an excitable commentariat too eager to intellectualize the business of politics. “There is no Mayism,” she informed the gathered media coldly as the 2017 British general-election campaign got underway, attempting to pop metaphorical balloons at the launch of her party’s manifesto.

This presents a particular problem for academics and scholars of international affairs, who are trained to believe that foreign-policy predilections exist, more or less, within predetermined paradigms. That Trump emerged from a world in which no such schools of thought prevailed means that putting a name on Trumpism can be a vexatious task. In their book on Trump’s attitude to international affairs, Brendan Simms and Charlie Laderman observe that there is more consistency in Trump’s worldview than is often presumed, and that his campaign pronouncements were in keeping with these preexisting views. But even then, it is a worldview composed of instincts rather than policy prescriptions. There was no grand strategic statement of intent from a cohort of key advisers in Foreign Affairs or the National Interest at the outset of the campaign. Foreign observers were left searching for fragments of evidence to help them piece together a picture of what might come next.

After victory, it was personalities rather than principles that received the most attention. The process of assembling the president’s national-security team began with auditions in Trump Tower or over dinner in Manhattan. We know—and we can see in the form of Secretary of State Rex Tillerson—that Trump sees merit in business acumen. Generals, from James Mattis to H. R. McMaster, are also deemed to bring something useful, and now that Steve Bannon has left the White House, they face less internal opposition. But even then, it is has been hard to discern a clear strategic script. Unpredictability is something that the new president seems to relish. He is not the first to attempt to make a virtue of this. President Nixon road tested the “madman theory” in his dealings with the Soviet Union, and Niccolò Machiavelli suggested that, in some circumstances, it was wise for a leader to “simulate madness” to keep his rivals and enemies guessing.

Once the Trump administration’s foreign policy has been through a succession of tests, of course, it may assume a more tangible form, or at least begin to follow a pattern. Should this happen, eager scholars will rush forward to give it a name or place it somewhere along a well-established continuum of realist versus liberal, isolationist versus internationalist or offshore balancer versus interventionist. In the meantime, it is perhaps too easy to get carried away with the idea that we are in uncharted territory, somehow without historical precedent.

Notwithstanding the lack of a doctrine, one thing we have learned already is that Trump operates within certain parameters in international affairs. The president may not do nuance, but he is more beholden to some norms than might have previously been assumed. He has “red lines” too, as his actions over Syria and North Korea seem to demonstrate. It is true that Trump has shown no interest in what Hal Brands calls the “intellectual architecture” of American grand strategy. More than that, a number of his key advisers have declared their hostility to some of the presuppositions that underlay the whole idea of the “liberal international order” as the leitmotif of America’s approach to the world. But even if the script has been scrapped, the White House continues to assume that there are certain rules of the game involving prestige, power and even ethics.

WHAT SETS the bounds of action, then? For Trump, it seemed to be an instinctive response in April 2017, following the latest chemical-weapons attack by the Assad regime in Syria, to order missile strikes on Shayrat Air Base, from where the attack had been launched. Those who objected that the measure was merely symbolic—not part of a carefully designed strategic plan—were at once correct and missing the point. What is more, the action in Syria became a curtain raiser of sorts: a prelude to proactive behavior in other theaters, where rogue regimes were warned that certain red lines did still exist, and the United States was willing to take action to enforce them. Soon after, a decision was apparently taken to reroute the U.S. aircraft carrier strike group Carl Vinson towards the Korean Peninsula after Pyongyang’s ballistic-missile test, also in April. Within days came the dropping of the GBU-43/B Massive Ordnance Air Blast (so-called “Mother of All Bombs”) on an ISIS affiliate in eastern Afghanistan.

There was no grand strategic master plan here in these episodic, uncoordinated and unplanned displays of U.S. military power. Nonetheless, the White House was eager to extract political capital from its actions. Thus, Trump pointedly delivered news of the missile strike in Syria to his Chinese counterpart, Xi Jinping, over chocolate cake, during dinner at Mar-a-Lago. This was intended to be a reminder of U.S. military prowess and political will. For a domestic audience, too, the president was eager to draw a distinction between himself and President Obama, on strategic and ethical grounds. On the one hand, he made clear that he was willing to tread where Obama had not. The desire to draw this contrast explains his condemnation of the Assad regime for crossing “many, many lines, beyond a red line.” On the other hand, he described the attack as nothing short of an “affront to humanity,” requiring a response on moral grounds. It was left to Secretary Tillerson to elaborate on this redrawing of red lines:

Those given the task of explaining U.S. national security were quick to draw attention to the fact that these actions, from Syria to Afghanistan and North Korea, came in quick succession. Visiting Seoul on a reassurance mission shortly after the two strikes, Vice President Mike Pence asserted that “the world witnessed the strength and resolve of our new president in actions taken in Syria and Afghanistan.” The regime in Pyongyang, he warned, “would do well not to test his resolve or the strength of the armed forces of the United States in this region.”

In times past, the use of limited force—and the threat of using more—to reinforce boundaries might have been construed as a species of deterrence. Yet, for the many critics of the administration, the willingness to declare an end to the era of “strategic patience” in dealing with Pyongyang—and the concomitant game of brinkmanship—risked undermining the type of long-term credibility on which successful deterrence depends. Just what type of foreign policy, then, were we witnessing?

IN RESPONSE to these concerns, it fell to the redoubtable McMaster to find the words to rationalize the new approach. The deployment of the aircraft-carrier strike group to the East China Sea, he explained to Fox News, in his first extensive interview after becoming the president’s national security advisor, was “prudent.”

Absent any coherent alternative, this idea of “prudence” soon caught on. Cdr. Dave Benham, spokesman at U.S. Pacific Command, clarified the picture in similar terms: “The U.S. Pacific Command ordered the Carl Vinson strike group north as a prudent measure to maintain readiness and presence in the Western Pacific.” Should we be in any doubt, Secretary Mattis further elucidated, “She’s stationed in the Western Pacific for a reason. She operates freely up and down the Pacific and she’s just on her way up there because that’s where we thought it was most prudent to have her at this time.”

When one digs a little deeper under the surface, one finds that prudence keeps popping up. Within the Trump national-security team, it is not just the so-called warrior-monks who are fond of the term. Michael Anton, director of strategic communications at the National Security Council, who has so far survived the cull of Bannonites, has also deployed it on a number of occasions since the inauguration. Acknowledging that military action against North Korea was unlikely, and would have dire consequences, he told Politico, “For reasons of prudence, it can’t be taken off the table at a juncture like this.”