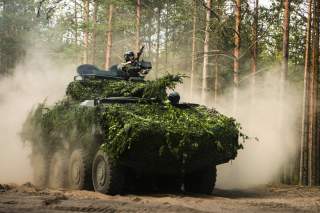 There has been a great deal of discussion in recent weeks over the attitudes of the two main presidential candidates towards the North Atlantic Treaty Organization. In particular, the Hillary Clinton campaign has taken clear aim at Donald Trump's comments about the continued utility of the NATO alliance—and questioned whether a Trump administration would continue to honor America’s commitment, under Article 5 of the 1949 Washington Treaty creating the alliance, “that an armed attack against one or more of them in Europe or North America shall be considered an attack against them all.”

This bedrock guarantee has served as the basis for deterring any outside power from contemplated a military assault on any part of the Euro-Atlantic community, by making the assertion that U.S. national security is indissolubly linked to that of its NATO partners in other parts of North America and across the Atlantic on the European continent. It builds on the strategic assessment offered by the father of geopolitics, Halford Mackinder, in his 1943 article in Foreign Affairs, about the need for a “Midland Ocean” alliance to prevent Europe from falling under the control of a dominant Eurasian superpower and thus being in a position to threaten the United States itself. The protection offered by the NATO alliance has contributed a great deal to the modern world and the emergence of a liberal world order characterized, as Charles Krauthammer noted in these pages fifteen years ago, by “open seas, open trade and open societies lightly defended”—which, in turn, has contributed to the peace and prosperity of the United States. Meanwhile its principal rival, the Soviet Union, was driven into bankruptcy.

The Washington Treaty was ratified by the Senate in 1949 and subsequent amendments—to permit the enlargement of the alliance to new members—have also received the Constitutional imprimatur of the upper house. The Article 5 commitment is thus a contractual obligation that must be carried out with the full faith and credit of the U.S. government.

But NATO is more than just Article 5. The treaty is comprised of fourteen articles, many of which tend to be ignored or forgotten. One is that the treaty is not an eternal alliance. Article 13 permits any member-state after 1969, to denounce the treaty and withdraw from it with one year's notification if it no longer adjudges that membership in the alliance suits its national interests. It is perhaps with Article 13 in mind that former defense secretary Robert Gates warned his NATO ministerial colleagues five years ago,

“The blunt reality is that there will be dwindling appetite and patience in the U.S. Congress—and in the American body politic writ large—to expend increasingly precious funds on behalf of . . .  nations apparently willing and eager for American taxpayers to assume the growing security burden left by reductions in European defense budgets. Indeed, if current trends in the decline of European defense capabilities are not halted and reversed, future U.S. political leaders—those for whom the Cold War was not the formative experience that it was for me—may not consider the return on America's investment in NATO worth the cost.”

Moreover, as President George W. Bush demonstrated in 2001 when the United States withdrew from the 1972 Anti-Ballistic Missile Treaty, the U.S. chief executive has the right to exercise executive authority to activate the denunciation clause without requiring Congressional approval.

Article 5 is also balanced by Article 3 of the treaty, which commits every treaty signatory to “separately and jointly, by means of continuous and effective self-help and mutual aid, will maintain and develop their individual and collective capacity to resist armed attack.” In other words, the “right” to expect protection and assistance from other allies contained in Article 5 is predicated on the responsibility each member voluntarily assumes in Article 3 to take the steps necessary to train, equip, finance and field forces and capabilities which will be made available to NATO.

The alliance, however, has never chosen to create criteria as to when a member would be judged to have violated Article 3 and thus, by its dereliction of spending and defense resourcing, to have signaled an unwillingness to abide by the terms of the Washington Treaty. (Such a determination might then be interpreted as a de facto denunciation of the alliance.) In the run-up to the 2006 Riga NATO summit, America’s Ambassador to NATO Victoria Nuland suggested that a basic metric (2 percent of a country's gross domestic product devoted to defense spending) be adopted as an “unofficial floor” for the defense budgets of every NATO member. The 2014 Wales summit ended with all states pledging to sustain spending at or above the 2 percent marker or, if not complying with that standard, to forego any further defense spending cuts and working to bring defense spending back above 2 percent of GDP by 2024. This promise, however, was voluntary and nonbinding (in any legal sense). Thus, it remains in the eyes of the various NATO beholders as to whether the spirit of the Article 3 obligations is being meet by other members of the alliance.

This can be a particularly dangerous state of affairs moving forward, when the willingness of NATO members to stand by their Article 5 commitment is being questioned and debates over whether members are “free riding” become more rancorous. Point 34 of the communiqué of the recently concluded Warsaw summit proclaims that the corner has been turned, that most NATO states have stopped further declines in their defense budgets, and that, collectively, the alliance now spends more on defense in 2016 than in 2009 (masking the fact that the modest increase comes after years of major cuts). This is why former national security advisor (and former NATO commander) Gen. Jim Jones and former undersecretary of state Nicholas Burns called upon the legislatures of every NATO member-state to write the 2 percent commitment into binding domestic legislation, to transform the Wales pledge into a legal commitment. So far, this has not happened.

If Article 3 suggests an obligation of all NATO states in terms of capabilities and resources that they bring to the alliance as a condition of membership, Article 8 also places caveats on the foreign policies of its members in terms of when they can call on the alliance for help. This little-cited provision in the Washington Treaty commits every member “not to enter into any international engagement in conflict with this Treaty.” Commitments or agreements made by NATO member states, therefore, that involve them in security matters that lie outside the purview of the NATO guarantees of collective self-defense in the North Atlantic zone (since Article 6 explicitly excludes the territories of NATO members outside this region from Article 5 guarantees) can impact the applicability of the Article 5 guarantees. This question was addressed when Turkey, a NATO member, signed the Baghdad Pact in 1955 to become a member of CENTO. In carrying out its obligations under CENTO, Turkey could not expect that other NATO members would automatically come to its aid. (Echoes of this were sounded in the run-up to the 2003 Iraq War when Turkey asked for consultations under Article 4 of the Washington Treaty. Some NATO members took the position that if Turkey were attacked by Iraq after supporting the U.S. invasion and allowing its territory to be used as a jumping-off point for U.S. forces, it could not expect automatic support under Article 5.)

In short, Article 8 was designed to prevent individual NATO member-states from offering actual or implied security guarantees to other, non-NATO members and therefore expecting that NATO as a whole would be bound to honor those guarantees.

In this election campaign, there has been talk about revising the Washington Treaty. But given the almost excessive focus on Article 5, perhaps, before going back to the drawing board, the allies ought to have a frank conversation about the rest of the treaty.

Image: Lithuanian and Portuguese forces are teamed up with U.S. Marines with the Black Sea Rotational Force for Exercise Saber Strike. Flickr/U.S. Department of Defense