There's Still a Lot We Don't Know About the Iran Deal 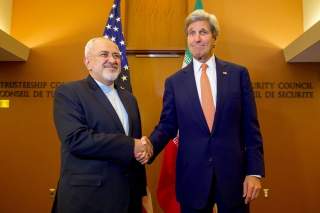 The latest report issued by the Institute for Science and International Security (ISIS) reveals confidential exemptions that Iran was granted by the Joint Commission in order to meet its requirements for implementing the Iran deal last January. The report has sparked a debate over whether there were in fact exemptions, and what they entailed. But the more serious issue raised by this report—and emphasized by its authors—regards the question of secrecy and confidentiality surrounding elements of the Joint Comprehensive Plan of Action and its implementation. From this perspective, the ISIS report is only the latest in a string of episodes over the past year in which issues involving secrecy (or lack of disclosure) have been exposed. Sometimes the issues have related directly to JCPOA provisions, and sometimes to the U.S. administration’s portrayal of events or policies related to the deal.

In their eagerness to block any criticism of the Iran deal, JCPOA supporters immediately denounced the ISIS report and attacked its credibility—not an easy task, considering David Albright is one of the most reputable voices on this topic. In a worrisome exchange with reporters, State Department spokesperson John Kirby denied any exemption for Iran, or that Iran had accumulated more than three hundred kilograms of “usable” low-enriched uranium—employing a new term that does not exist in the deal itself. On the question of secrecy, experts who support the deal have been arguing on social media that not only do they not view secrecy as a problem, but that it is a common element in arms-control agreements, citing U.S.-Soviet/Russian arms-control treaties as a case in point.

There are several problems with this line of argument. First, one cannot escape the irony that arms-control experts that have joined the camp of JCPOA supporters—and that now seem totally fine with secrecy—are the same people that for years hailed transparency as a key ingredient of successful arms control. But more substantively, the Iran deal was purposely devised as a very public arrangement (the full text is available online), and President Obama has stated on many occasions that he does not trust Iran, which is why its program must be transparent, and under constant scrutiny through an intrusive inspection regime. Finally, and most significantly, Iran is a known violator of the NPT—having worked on a secret and illicit nuclear-weapons program for decades while a member of the treaty. Because of its very troubling past record, openness and transparency—not only regarding all elements of Iran’s nuclear program, but including the terms of the deal and its implementation—are so essential. It makes little sense to grant a state like Iran confidentiality privileges—would anyone have thought to do so with Saddam Hussein after the extent of his illegal nuclear-weapons program was revealed in the wake of the 1991 war?

Those set on drawing a comparison between the JCPOA and U.S.-Soviet Cold War arms control are on particularly shaky ground. Beyond the fact that both agreements deal with nuclear-weapons capabilities, they have little in common. The latter experience involved two nuclear-armed powers that decided to introduce stability into their bilateral relationship through a political process where they called the shots. This is a fundamentally different situation than negotiating with a state that was caught cheating for decades on an international treaty that bans work on a nuclear-weapons capability. In the latter case, the P5+1 were actually negotiating on behalf of the nonproliferation regime that was violated by Iran. As such, the P5+1 and Iran were not on equal standing in the negotiation, and in light of its deceptive past behavior, there was no rationale for granting Iran confidentiality.

Over the past year, additional cases of secrecy, confidentiality and lack of disclosure have been revealed, each with its unique features, but all following a similar pattern: revelation of secrecy in the deal and/or lack of full disclosure by the U.S. administration, and then attempts by the administration to deny or cover up, bolstered by claims that everything was either already known, legitimately kept confidential or insignificant. Each additional case that has been exposed has had the effect of gnawing away at the Obama administration’s credibility regarding the nuclear deal, while eroding confidence that Iran will be firmly held to its commitments.

The first instance occurred already last summer, regarding the secret side deal between Iran and the IAEA for a one-time inspection of the military facility at Parchin. The question of whether, and under what conditions, Iran would in the future allow inspections of suspicious military facilities like Parchin was one of the more thorny issues negotiated by the parties. For the P5+1, the JCPOA satisfactorily resolved the issue by determining that any suspicion could be checked by the IAEA within twenty-four days. A close reading of the text of the agreement, however, reveals that the twenty-four-day timeframe could easily be stretched out by Iran—a true cause for concern, in light of emphatic statements issued by Khamenei and others that Iran would never allow inspection of its military facilities.

Against this backdrop, the terms of the Parchin inspection in September 2015 were an important test case, and yet the P5+1—who ran the negotiation—claimed to have no role in the arrangement reached between Iran and the IAEA. Was it possible that the critical issue of the Parchin inspection was outside the purview of the P5+1, when the entire JCPOA was negotiated and authored by these six powers? Not likely. And after it became clear that IAEA inspectors would only be monitoring from outside the facility, while Iranians collected soil samples from within, the problematic nature of the arrangement was exposed. The response to critics who pointed out that the P5+1 were in effect enabling Iran to inspect itself was to accuse the critics of distorting reality.

There have been additional attempts to obfuscate concessions that were made to Iran. Two cases in particular are worthy of mention. The first involves a report in the Associated Press from July 2016, revealing a document that laid out Iran’s enrichment plans for year eleven of the deal. According to the document, Iran plans to install and operate 2,500–3,500 advanced centrifuges, with the effect of bringing breakout time down to six months by year thirteen. Once again, this was portrayed as being between Iran and the IAEA. The administration’s reaction to the AP revelation was to deny any secret deals, while claiming that it was known that Iran’s breakout would come down after ten years. And yet, when Obama had said as much back in April 2015—namely, that breakout time could go down almost to zero in year thirteen, fourteen, or fifteen—the State Department immediately denied in a press conference that he had said this in relation to a prospective deal.

The second case involves the $400 million paid to Iran at the same time that American prisoners held on bogus charges in Iran were released in mid-January. At the time of the prisoner exchange, the Obama administration had hailed the release of Americans as a sign of easing of tensions with Iran—a direct result of the nuclear deal. But when the Wall Street Journal released its story in August, the revealed temporal proximity of the two events sparked accusations of ransom paying. The administration’s first response was to deny that the two events were in any way connected, but when a subsequent report presented evidence that they were, officials were forced to back away from this false claim and change their story. According to the new version, the money was to be transferred to Iran in any case, and it had thus “only” been used as “leverage” to ensure the prisoners’ release. The administration’s deception in this case was most likely driven by the perceived need to preserve its narrative of a more cooperative Iran post-deal; this had been a key selling point for the deal in the struggle for congressional approval in 2015.

These cases expose a hyper-defensive administration that is harshly silencing any criticism of the JCPOA or its implementation. The administration obfuscates important details (as seen at the State Department press conferences), defends problematic secrecy and lack of transparency, and acts as Iran’s advocate regarding problems that arise. But there is no justification for secrecy regarding the JCPOA, Iran’s arrangements with the IAEA or discussions regarding implementation of the deal in the Joint Commission. When dealing with a known violator, confidentiality has no place.

At the end of the day, the secrecy and the cover-ups are creating a sense that the U.S. administration is not being forthright about what the JCPOA is and what it entails—either to make us believe the deal is working, or that Iran is changing behavior for the better. The original sin in this regard was the abrupt closing of the PMD file last December, letting Iran off the hook regarding its past weaponization activities. Here too, Iran was provided an exemption from the requirement to answer all questions related to the PMD, to the satisfaction of the IAEA. Despite only partial cooperation with the IAEA investigation, and even though Secretary of State John Kerry had maintained that answering all questions was “fundamental for sanctions relief,” the file was nevertheless closed and everyone moved happily to Implementation Day.