Theresa May Out; Boris Johnson In? 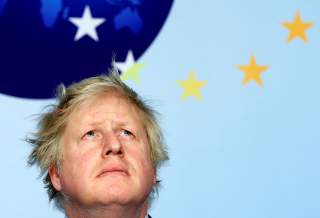 De ja vu all over again? Summer is here, the British prime minister has resigned amid Brexit turmoil, and Donald Trump is headed to the United Kingdom. No, it’s not June 2016. It’s May 2019.

There are no second acts in American life, but Boris Johnson, the former foreign secretary, London mayor and Spectator editor, is hoping there are in British politics. For three years—since fumbling the premiership to Theresa May—he and his clique have sought a do-over, a second, or third, or fourth swing at the bat. On Friday, he got it.

“Back in 2016, we gave the British people a choice. Against all predictions, the British people voted to leave the European Union,” May said in front of Number 10 Downing Street Friday, resigning her office effective June 7. “I have done my best to do that. . . . I tried three times. . . . But it is now clear to me that it is in the best interests of the country for a new prime minister to lead that effort.”

The race is on. In addition to Johnson, who announced weeks ahead of her resignation that he would seek the leadership if May quit, other heavy-hitters could take a crack at it. This list includes: Michael Gove, a former staunch Johnson ally and May cabinet member and favorite of media mogul Rupert Murdoch, former foreign secretaries Dominic Raab and Jeremy Hunt, and Sajid Javid, the neoconservative home secretary. Javid would be Britain’s first prime minister of color.

Johnson is the odds-on favorite. Like Joe Biden in the United States, Johnson’s campaigning as if he will soon govern. Johnson said Friday, in Switzerland: “We will leave the EU on October 31, deal or no deal.” The Financial Times signaled lukewarm openness to a Johnson cabinet Friday, if only to stave off a victory by hard-left Labour leader Jeremy Corbyn.

“Siding with the Leave campaign because his great rival, former chancellor George Osborne, backed Remain and then failing for two and a half years to come up with a plan for what leaving the EU would involve, was monstrously irresponsible,” Camilla Cavendish wrote in an editorial. “Yet it is precisely that opportunism, a willingness to tack with the wind, which makes Mr Johnson so capable of reinvention.”

What Britain doesn’t have is time—time to further dither on Brexit, time for a protracted Conservative Party leader contest, and little time to prepare for a likely raucous visit by President Donald Trump. A state dinner in London is to be held June 3. Corbyn has already boycotted the controversial occupant of the White House. It will fall on May—who Trump has quarreled with—and her presumably anointed successor to host the American leader, who is bringing all of his adult children with him, including White House senior counselors Ivanka Trump and Jared Kushner. Media reports emphasize that Johnson and Trump are tight, spiritual kindreds even. A former senior administration official emphasizes to me that the story is far more complicated.

Trump, rarely bashful, has full-throatedly backed Brexit, and cultivated a tight relationship with the movement’s celebrity frontman, the now-resurgent Brexit Party leader Nigel Farage. “I said this was going to happen, and I think that it’s a great thing,” Trump said as a candidate in 2016 after the referendum result. He was speaking at his golf course in Scotland. “Basically, they took back their country.”

If only British leadership were so certain.