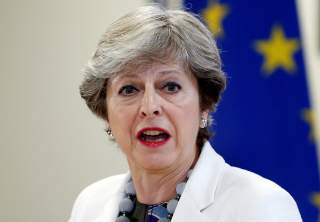 Theresa May’s latest Brexit setback—this time over the Irish border issue—confirms the impression of May as an accident-prone British prime minister who is out of her depth as her country’s leader. This does not bode well for the smooth conclusion of the Brexit negotiations, or for the UK’s immediate economic outlook. This is especially the case since it is unlikely that anyone more competent will replace May anytime soon.

The most recent denting of May’s credibility occurred as a result of this week’s collapse of the talks in Brussels about finding a solution to the Irish border issue. Europe has seen resolving that issue as one of the essential preconditions for Brexit negotiations to move forward, from the so-called divorce phase to the more substantive and complicated negotiating phase of a new UK-European trade arrangement.

It seemed to come as a total surprise to May that just as she was trying to wrap up a divorce deal with her European partners in Brussels, the Democratic Union Party (DUP) representing Northern Ireland’s interests should make it clear that it was opposed to a new Irish border arrangement.

While May had sold the Dublin government on compromise language regarding the Irish Republic’s border with Northern Ireland, it appeared that she had not taken the trouble to clear this compromise with the DUP. This is all the more difficult to understand considering how totally dependent her minority government is on the DUP for its support in Parliament.

The Irish border fiasco would not be of the greatest importance had it occurred in isolation. This is especially the case since it is likely that in the end Westminster will find a way to bring the DUP on board. It does, however, add fuel to the widespread public impression of a bungling UK premier.

Among May’s more serious Brexit-related mistakes was the premature triggering, in March 2017, of Article 50 of the Lisbon Treaty. That triggering started the clock on the strict two-year timeline within which the Lisbon Treaty requires that exit negotiations be wrapped up. How wise was it for May to begin the negotiating process before she had managed to iron out the UK’s negotiating stance within her fractious cabinet and the divided Conservative Party?

Equally troubling is the fact that May has hardly met with success in trying to bolster the UK’s negotiating position with its European partners. By unnecessarily calling for early elections last June, and then by badly mishandling those elections, she managed to lose her party’s majority in Parliament, thereby weakening her mandate to negotiate. At the same time, in playing up the UK’s special relationship with the United States as an alternative to Europe, May appears to have grossly underestimated how unreliable a trade partner “America First” President Trump would be.

In the eighteen months since the UK’s Brexit referendum, the pound has declined by more than 10 percent, and the UK economy has seriously underperformed that of Europe. There now seems to be a real risk that the UK’s economic performance will keep deteriorating in the immediate future. It will do so as investors at home and abroad become increasingly uneasy that May’s apparent lack of a Brexit mandate at home will heighten the prospect that the UK will crash out of the euro when the two-year negotiating period ends in March 2019.

After May’s humiliating election defeat last June, George Osborne, former chancellor of the exchequer, famously described her as “a dead woman walking.” Yet May has not only limped on as prime minister, but is generally considered likely to continue doing so for the foreseeable future. This is not because she enjoys overwhelming support within her highly divided Conservative Party. Rather, it is because there is no obvious replacement for her within the party and, with opposition leader Jeremy Corbyn riding high in the polls, nobody in the Conservative Party relishes the prospect of yet another UK election.

All of this should be of serious concern to Europe and the United States, since no one has an economic interest in seeing the Brexit negotiations fail. For this reason, the least one must hope is that cooler minds prevail in London, and that President Trump does not continue to undermine May’s already-tenuous political position by picking unnecessary fights with her, as he has done in recent weeks.